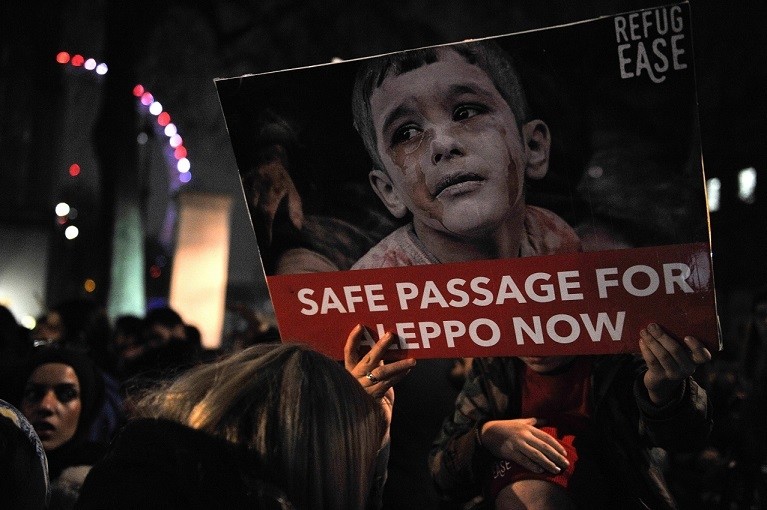 Several thousand people protested Saturday on the Turkish border against the siege of Syrian city of Aleppo that has prevented deliveries of much-needed aid and the evacuation of thousands of civilians.

The crowds arrived by bus and car convoys from across the country under the slogan "Open the Way for Aleppo" close to Turkey's Cilvegözü Border Gate which has become a key hub for transporting the wounded from Aleppo.

They unfurled banners reading "Aleppo cannot be left under bombardment."

The action was organized by the Humanitarian Relief Foundation (IHH) Turkish aid charity, which is playing a large role in the transport of aid for Aleppo and pressing for greater access.

Evacuation from the moderate opposition-held areas of Aleppo has been suspended after pro-regime Iran-backed militias attacked the evacuation convoy, killing four civilians.

Ankara has stepped up diplomacy with all major actors including Iran, with Foreign Minister Mevlüt Çavuşoğlu speaking 13 times on the phone with Iranian counterpart Friday alone.

The convoys also brought aid to be delivered to Syrians being evacuated from Aleppo. According to the IHH, thousands of cars and over 1,500 aid trucks have arrived in the border area as a result of their appeal.

"God willing, we will not leave our brothers to the hands of the tyrants," Kübra, a young female protestor, told AFP.