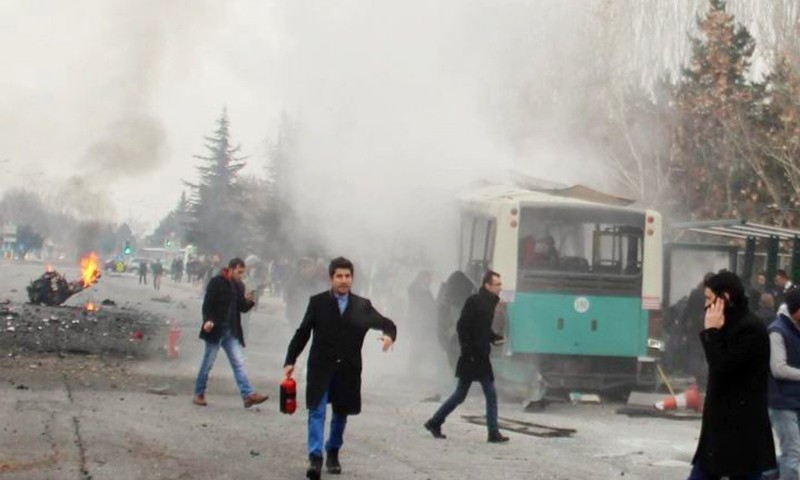 The terrorist who carried out the deadly car bomb attack in Turkey's central Kayseri province, which killed at least 14 soldiers and injured 56 others on Saturday, had received training at PYD camps in Kobani and entered Turkey from Syria through unlawful means, reports said on Monday.

Accordingly, the terrorist initially went to Lice district of southeastern Diyarbakır province' after entering Turkey through rural Suruç district across the border from Kobani.

Intelligence sources claimed that the terrorist received bomb and weapons training at terrorist PKK organization's Syrian offshoot PYD's camps in Kobani, similar to the perpetrator of Istanbul terror attack a week ago, which killed 44 people and injured 155 others. Foreign Minister Mevlüt Çavuşoğlu had said after Istanbul twin blasts that one of the terrorists entered Turkey from Syria a week before the attack.

The perpetrator of Kayseri attack reportedly picked up the bomb-laden vehicle containing 200 kilograms of explosives from Lice - often cited as PKK's base for similar attacks - and headed to Kayseri. The vehicle had been stolen two days ago in Şanlıurfa and was brought to Lice to load it with explosives.

A total of 15 people, including the driver of the public transportation bus carrying off-duty soldiers, have been detained as part of the probe launched following the attack, Kayseri Governor said on Monday. He added that more detentions could take place to catch suspects involved in the attack.

DNA procedures are still ongoing to identify the perpetrator of the terrorist attack.

The PYD/PKK has aimed at establishing a self-declared autonomous canton from Syria's northwestern Afrin to Kobani and Jazeera cantons in the northeast, which moderate opposition groups have opposed as it threatens Syria's territorial integrity.

Due to organic organizational links between the PKK and the PYD, Turkey sees the PYD as a terrorist establishment in its borders, which Ankara has said numerous times it will not allow.