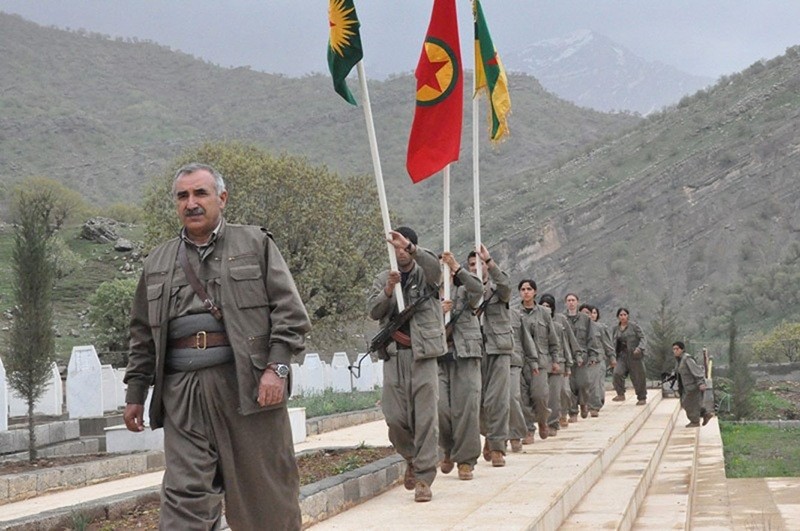 The PKK, whose leader Murat Karayılan has threatened the Turkish politicians with suicide attacks and assassinations in a recent interview, has been enjoying an open support from the EU politicians despite being recognized as a terror organization

Murat Karayılan, the de-facto leader of the PKK terrorist organization, threatened Turkish politicians with suicide bomb attacks while acknowledging the presence of a "battalion" established solely for this purpose.

Speaking to the PKK-affiliated Fırat News Agency (ANF), Karayılan said the "Battalion of Immortals," which is in the form of sleeper cells, may be activated if the PKK's imprisoned leader Abdullah Öcalan's life is being threatened.

The alleged threat on Öcalan's life was voiced by the PKK's Europe executive Zübeyir Aydar during the "Turkey, The Kurds and the war in the Middle East" section of the 13th International Conference at the European Parliament. Aydar, who has long been sought by Turkey with repeated requests of extradition from European countries, claimed that circles linked to Turkey's ruling Justice and Development Party (AK Party) and opposition Nationalist Movement Party (MHP) are discussing ways to "remove" Öcalan.

Following his capture in Feb. 1999, Öcalan was sentenced to death, which was later turned into aggravated life imprisonment after Turkey abolished the death penalty as part of European Union accession reforms in 2002, despite staunch opposition from the public at the time. Since then, Öcalan has been kept in a maximum security prison on İmralı Island, which can only be visited with special permits, which are often issued for Öcalan's lawyers, family members and representatives from international organizations.

Karayılan said: "If such a thing takes place, in addition to a development of an insurrection based on years of disengagement, the Battalion of Immortals, organized for such circumstances, will also step in. The Battalion of Immortals are fedayeen [Arabic word meaning "those who sacrifice themselves"] forces that are always active in the form of sleeper cells. Actually, they are forces that have a higher level of concentration, which can be described as 'the fedayeen of the fedayeen.' The concept of this battalion is to annihilate and wipe off all leaders and politicians that were a part of the decision targeting Leader Apo."

To continue receiving support from Europe and the U.S., the PKK distanced itself from the latest suicide attacks targeting Turkish security forces and civilians, which are undertaken by its hardliner offshoot Kurdistan Freedom Falcons (TAK). However, Karayılan even described how such an attack can be carried out: "No one should say 'they can't do it.' If four fedayeen simultaneously attack a leader speaking in a square or cruising inside a convoy, wouldn't they achieve any results?"

He continued by claiming that his words are not a threat, but a reminder that such a "security measure" exists.

Murat Karayılan, born in 1954, is the acting leader of the PKK, which is a prescribed terrorist organization by the U.S., UK, Australia, Germany, the EU and NATO. Karayılan has been the PKK's acting leader ever since the organization's founder and leader, Abdullah Öcalan, was captured in 1999.

The PKK has increased its attacks against politicians, including those of Kurdish origin, in an attempt to silence any criticism, and also stop democratic movements. More than a dozen politicians have been assassinated in the past couple of years. In its recent attacks, the terrorist organization has targeted AK Party politicians as well as targeting supporters of the Peoples' Democratic Party (HDP). On Aug. 25, the chairman of the Republican People's Party (CHP) Kemal Kılıçdaroğlu and his convoy were caught in crossfire during an armed clash between the PKK and Turkish soldiers who were escorting the convoy through the northeastern province of Artvin. Turkish security officers managed to thwart an attempted rocket attack by the PKK and Kılıçdaroğlu was not injured.

The PKK also receives strong support from European politicians, despite it being recognized as a terror organization by the member states.

A recent report prepared by Turkish intelligence has revealed that the PKK terror organization gains 30 million euros in income per year by collecting fees from its foundations in European countries despite the group being listed as a terrorist organization.

The PKK, which has killed thousands of innocent people in Turkey, also maintains wide elbow room in EU countries. Ankara has repeatedly voiced its concerns over European countries supporting the PKK, both politically and financially. The PKK also kills civilians and security officials in Turkey.

Between 2006 and 2016, Turkey has requested the extradition of 136 PKK terrorists from German authorities. But only three have been handed over so far, according to the International Law and Foreign Affair General Directorate of the Justice Ministry. The general directorate of the ministry also said, besides Germany, Turkey has requested the extradition of another 263 terrorists from 20 EU countries, between 2007 and 2016, but only eight of them have been sent back.

EU authorities recognize the PKK's foundations within European borders as official nongovernmental organizations and the deadly terror group opens and operates its associations in Europe by deceitfully naming them "democratic centers," "Kurdish people centers," or "community centers." However, these places are often used by the PKK to spread terror propaganda.

The PKK has also intensified its attacks against Turks in European countries, following the detention of its political wing, the HDP deputies, due to their open support to the terror group and its members.

The terror group is also being allowed to protest against the Turkish state in many European cities, declaring war on the government and demanding the release of their imprisoned leader, Abdullah Öcalan.