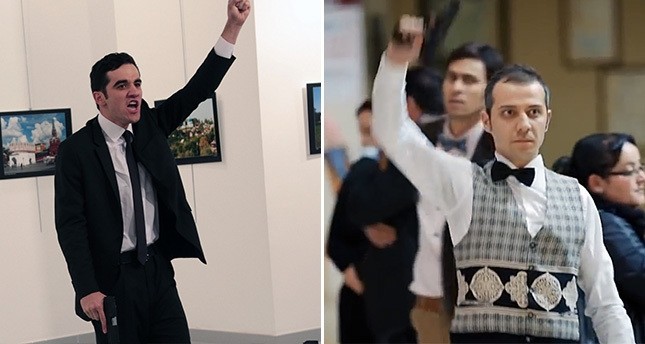 A television series which was being published in a broadcaster run by the Gülenist Terror Group (FETÖ) alluded to the Russian Ambassador Andrey Karlov's assassination with numerous similarities in an episode broadcasted in 2014.

Russian Ambassador to Ankara Andrey Karlov was killed on December 19, 2016 following an attack by Mert Altıntaş, a suspected Gülenist, during the opening reception of an art exhibition in the Turkish capital. Police special forces had killed Altıntaş in an operation that lasted around 15 minutes.

In one of the episodes of the TV series, an assailant is 'killed' during an operation by special forces at the scene, the Contemporary Art Gallery in Ankara's central Çankaya district -- the same place where Karlov was assasinated.

The main plot of the 89th episode of the series entitled "Souls Dedicated to Order" (Nizama Adanmış Ruhlar) bears striking resemblance to the actual assassination of Karlov.

In the series, an unidentified ambassador visits an exhibition with his girlfriend, as a hypothetical terror group, which infiltrates to the art gallery through its agents with plans to assassinate the envoy. Ambassador Karlov was also at an art exhibition in capital Ankara when he was assassinated on Dec. 19 by gunman Mevlüt Mert Altıntaş, who is allegedly affiliated with FETÖ.

"This country has to burn its bridges with the West" perpetrators of the attack say in the TV series, highlighting that the deal must not be signed the next day.

The first attempt to kill the ambassador through poisoning his drink is thwarted by undercover policemen who are also at the exhibition. When the attempt fails, the waiter who serves drinks meets with his accomplices and receives a gun to shoot the ambassador.

Another assailant also tries to shoot him but is also shot by the police and the ambassador is evacuated from the gallery.

This time an assailant tries to stab the envoy, but fails as police officers notice the kinfe in her hand and prevent her.

In the final scene, as the ambassador tries to go somewhere safe with his girlfriend, he realizes that his girlfriend was also cooperating with his assailants and she tells him that she has successfully infiltrated his life but he had no doubts about it.

FETÖ, led by Fetullah Gülen who lives in a self-imposed exile in the U.S. state of California, is accused of infiltrating Turkish state institutions including the military, judiciary, political parties and many others with the aim to take over the state.

On July 15, a FETÖ-led coup attempt against the democratically elected government in Turkey killed 246 people and injured 2,200 others.

The terrorist group has recently been accused of perpetrating the assassination of Russian ambassador Andry Karlov, but its motives still remains a mystery as investigation resumes.