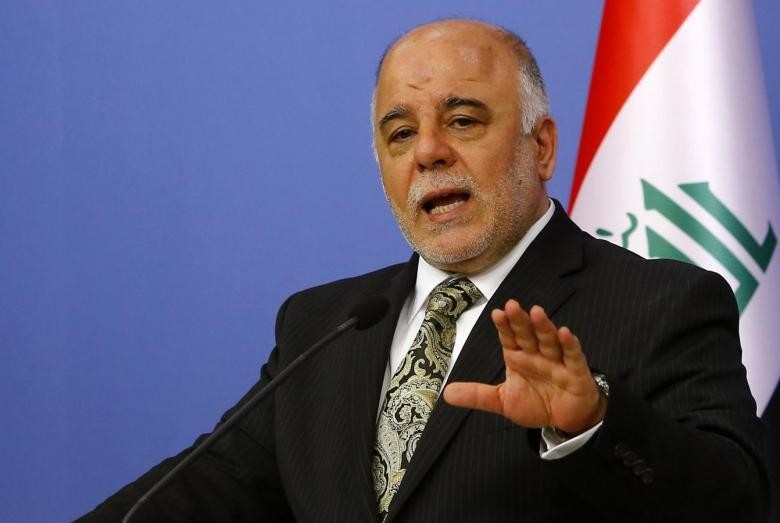 "We cannot accept the PKK's attacks against Turkey from our territory. Also, our constitution does not allow such actions," he said in a press statement late Tuesday.

Touching upon Turkish Prime Minister Binali Yıldırım's upcoming Iraq visit, he said: "We want to develop our diplomatic and economic relations with Turkey. We want to cooperate in security and other areas with Turkey and all other countries."

Referring to the offensive against Daesh in Mosul, he said the Iraqi army is making advances. "We need intelligence sharing from other countries to eradicate Daesh terror," he concluded.

In an exclusive interview with the Al-Monitor news website in late December, Kurdistan Regional Government Prime Minister Nechirvan Barzani said the PKK-affiliated Sinjar Resistance Units (YBŞ) are not welcomed by the local Yazidi people and their presence is causing instability in the region. Additionally, Vian Dakhil, a Yazidi lawmaker in the Iraqi parliament, spoke against the terror group's activities in the region recently, claiming her community did not want them. "The PKK have nothing to do in Sinjar," she said.

Last Friday, President Recep Tayyip Erdoğan held talks over the phone phone with Prime Minister al-Abadi. During their conversation, Erdoğan reportedly told al-Abadi that Yıldırım planned to visit Iraq sometime in January. He did not, however, provide an exact date for the upcoming visit.

Prime Minister Yıldırım is planning to visit Iraq sometime later this week, sources at the prime ministry told Anadolu Agency on Monday. The visit will be another indication of the end of the diplomatic crisis between the two countries that surfaced after the Iraqi government demanded that Turkey withdraw its troops from the Bashiqa camp near Mosul, which is a base for the Turkish military to train the peshmerga in their fight against Daesh.

Turkey's Defense Minister Fikrı Işık said in November that nearly 4,000 individuals have been trained by the Turkish Armed Forces (TSK) at Bashiqa to fight against Daesh, adding that more than 700 Daesh terrorists have been eliminated by the forces trained in the camp. Ankara maintains an estimated 500 troops in the Bashiqa camp who are training are local fighters who were sent there at the request of al-Abadi.

In recent months, the mission's presence in Mosul in northern Iraq has led to tension between Baghdad and Ankara amid calls by some Iraqi lawmakers for the Turkish troops to withdraw. The relations have recently seen a thaw, as the Iraqi premier stated that bilateral relations are "back on track" with Turkey.