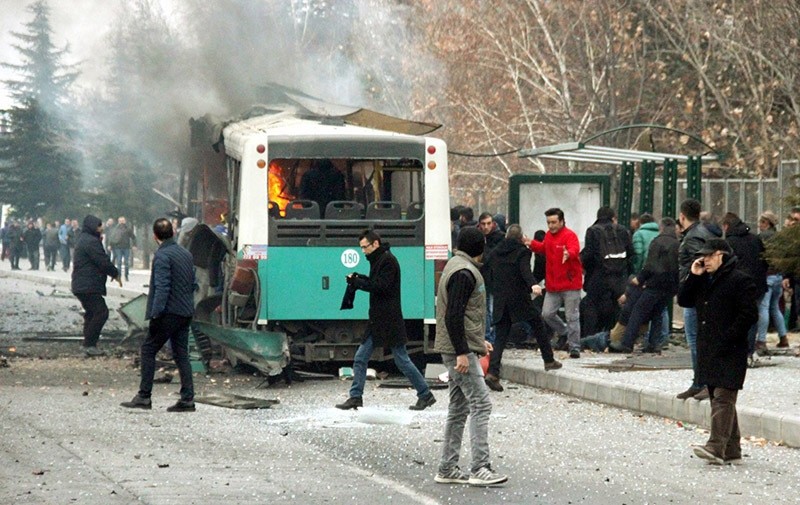 Four suspects including one woman were detained in Turkey's southern Adana province over the terrorist attack that killed 14 soldiers in the central Turkish province of Kayseri in December.

During the investigation on the car-bomb attack in Kayseri, anti-terror units of the Adana Police Department found that the armed vehicle used in the attack was loaded with explosives in Adana's district of Imamoğlu.

The anti-terror team of Adana launched an operation in the Gülbahçesi neighborhood of Adana's Seyhan district, detaining four suspects as part of the investigation.

The suspects are believed to have loaded the vehicle with the bomb in Imamoğlu, where they handed over the car to the perpetrator, and are thought to have conducted exploring and sketch works on the Adana-Kayseri route and the inner-city the route of the attacked military bus.

The terrorist, who carried out the deadly attack, had come from Lice district of Turkey's southeastern province of Diyarbakır.

14 soldiers were killed and 56 others were injured after a car bomb targeted a public transportation bus near a university campus in central Turkish province of Kayseri on 17 December, a week after a deadly PKK-led terrorist attack killed 44 people in Istanbul.

The blast reportedly took place around 08:45 a.m. local time when a public transportation bus carrying civilians and off-duty soldiers in front of the entrance of Erciyes University campus in Kayseri was hit by a car-bomb, the military said.

The soldiers, consisting of low-ranking privates and non-commissioned officers were on leave from the commando headquarters in the city.