Erdoğan says no turning back from clearing terror groups out of Syria's al-Bab, Manbij 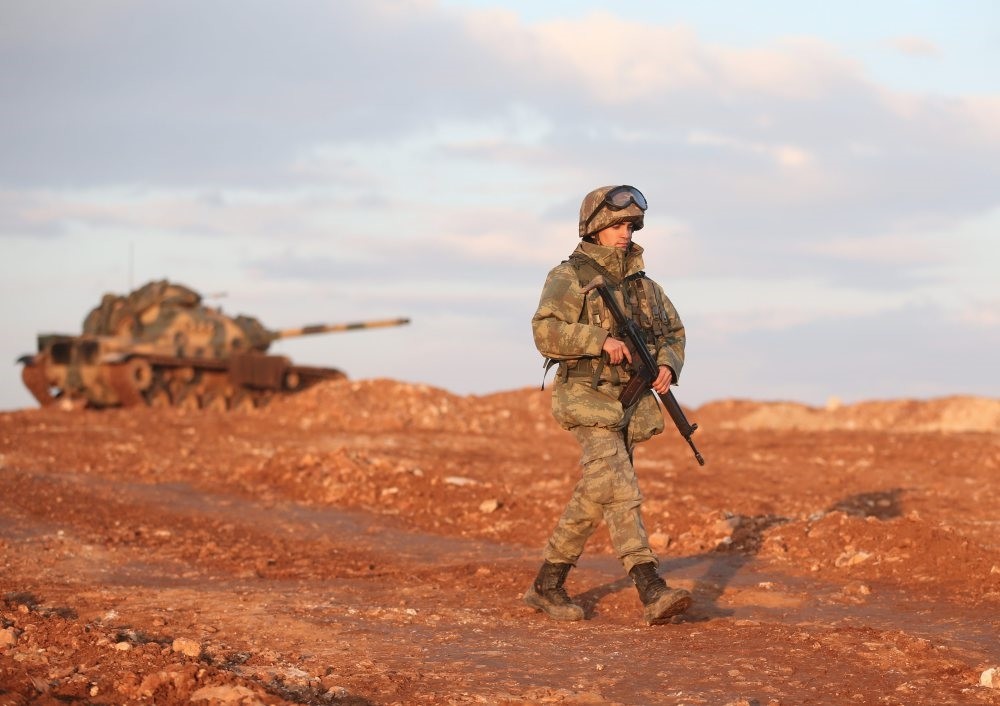 Turkish soldier seen during Operation Euphrates Shield near Syrian town of al-Bab on Jan. 3. (AA Photo)
by Daily Sabah with AA
Jan 07, 2017 12:00 am

Ankara has reiterated determination in clearing the Daesh and YPG terror groups from northern Syria to limit their threats to Turkey. President Erdoğan said on Friday that there is no turning back from the fight against terror and after al-Bab, the Turkish military will move to Manbij

Ankara has reiterated its position against Daesh and the PKK-affiliated Democratic Union Party (PYD) and its armed wing the People's Protection Units (YPG) in Syria, vowing to continue its fight until the terror groups were driven out of al-Bab and Manbij as part of Operation Euphrates Shield.

The reaffirmation came as President Recep Tayyip Erdoğan, speaking at an inauguration ceremony in Turkey's southeastern province of Şanlıurfa yesterday criticized the ineffectiveness of coalition airstrikes against Daesh.

"The real aim of those who bombed Syria every day in the name of fighting Daesh was exposed as soon as Turkey put boots on the ground in Syria. Those who were asking, until recently 'Why don't you fight this group?' now say, 'Don't move forward. Stay within 20 kilometers.' There is no such thing, we will move forward until we complete the job," he said.

"For us, the horses have already bolted. We will not stop until we clear al-Bab and Manbij off the terror presence," Erdoğan said, underlining that Turkey has achieved significant success against terror groups in Operation Euphrates Shield.

The Syrian town of Manbij has become a thorn in the side of U.S.-Turkey relationship, as the YPG-dominated Syrian Democratic Forces (SDF) maintains its control there. The government has repeatedly expressed its frustration over the issue as Ankara argues that U.S. supports for the SDF is eventually transferred to the PKK and ultimately used against Turkey.The U.S. regards the YPG as an ally in its fight against Daesh, but, Turkey considers it a terrorist organization due to its links to the PKK, which has killed over 40,000 citizens in a three-decade insurgency in Turkey.

The YPG has a continued presence in Manbij, which is on the west banks of the Euphrates and with Afrin near the Turkish border, the YPG aims to establish a self-declared autonomous canton from Syria's northwestern Afrin to Kobani and Jazeera cantons in the northeast, a move opposed by the moderate opposition groups as it threatens Syria's territorial integrity.

Erdoğan also criticized the U.S. and Iraq for launching an offensive against Iraq's Daesh-held Mosul, as well as Syria's Raqqa without necessary cooperation and taking Turkey's concerns into consideration.Ankara has been pushing southwards, supporting FSA forces as part of the Operation Euphrates Shield launched on Aug. 24, to now clear al-Bab from Daesh terrorists and form a terror-free zone of 5,000 square kilometers comprising of the towns of al-Bab, al-Rai, Azaz, Jarablus and Manbij.

The terror-free corridor will ensure security for Turkey's southern border with Syria, while providing a safe shelter for locals in the region, which would stop the mass influx of refugees coming into Turkey.Operation Euphrates Shield has seen both Daesh and PKK/PYD terrorist groups targeted by the opposition Free Syrian Army (FSA) and Turkish Armed Forces (TSK) with its tanks, artillery and aircrafts.

More than 1,300 Daesh terrorists have been killed since Turkey launched its military campaign in northern Syria, the Turkish General Staff said in a statement Friday. The military said 1,362 had been killed since Operation Euphrates Shield was launched on Aug. 24, with a further 168 wounded and six taken prisoner. Turkish forces and the Free Syrian Army (FSA) had also killed at least 291 PKK and Democratic Union Party (PYD) terrorists during the operation, the statement added. The operation, in which the FSA is backed by Turkish artillery, tanks, air power and special forces, is currently focused on taking the town of al-Bab from Daesh - a battle that has seen the FSA and Turkish military also come into conflict with the PKK/PYD.

Shelters, defensive positions, command and control buildings, weapons and vehicles were destroyed, as 119 identified Daesh targets were hit by artillery. Another 21 Daesh targets were hit by Turkish warplanes in al-Bab and Bzagah, destroying shelters, headquarters, control points, weapons and vehicles. Sixteen improvised explosive devices left in the areas cleared of the Daesh terrorist organization were destroyed by explosive ordnance disposal teams made up of Free Syrian Army (FSA) fighters in the region. The Turkish military continues to take the necessary measures to ensure the safety of civilians in the area, the statement added.