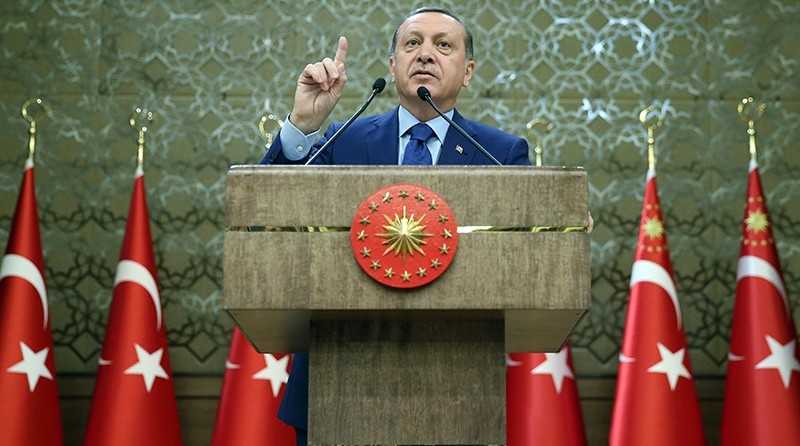 Nobody can deny the links between PYD/YPG and the PKK terrorist organization, as the connections between the two groups have been revealed by NATO-supported documents, President Recep Tayyip Erdoğan said on Thursday.

The President spoke to local headmen at the Presidential Complex in Ankara and criticized the West for failing to recognize the connection between the PKK and its Syrian affiliate the PYD and YPG.

He also slammed the U.S.-backed coalition for failing to support Turkey's operation against Daesh terrorists in Syria's al-Bab, saying that it has proved that getting rid of Daesh is not a priority of the coalition.

Ankara considers the YPG a terror group and the Syrian offshoot of the outlawed PKK, which itself is listed as a terror organization by the U.S., Turkey and the EU.

Turkey argues that there is no difference between the YPG and the PKK, as they share the same leadership, ideology and organic organizational links. Consequently, Ankara has repeatedly said that any military support give to the PYD/YPG would eventually be transferred to the PKK and ultimately be used against Turkey.

Unlike the PKK, Washington does not list the YPG as a terrorist group. Contrarily, the U.S. has previously sent military advisers and arms to Kobani to assist the YPG in its offensive on Manbij, located west of the Euphrates River near Aleppo.

Tensions between Turkey and the U.S. have particularly risen in recent months as Turkey demanded that all elements affiliated with the PKK terrorist organization must leave the Syrian town of Manbij, located on the western banks of the Euphrates River before crossing back to the eastern banks of the river after helping local Arab forces liberate the town of Daesh.