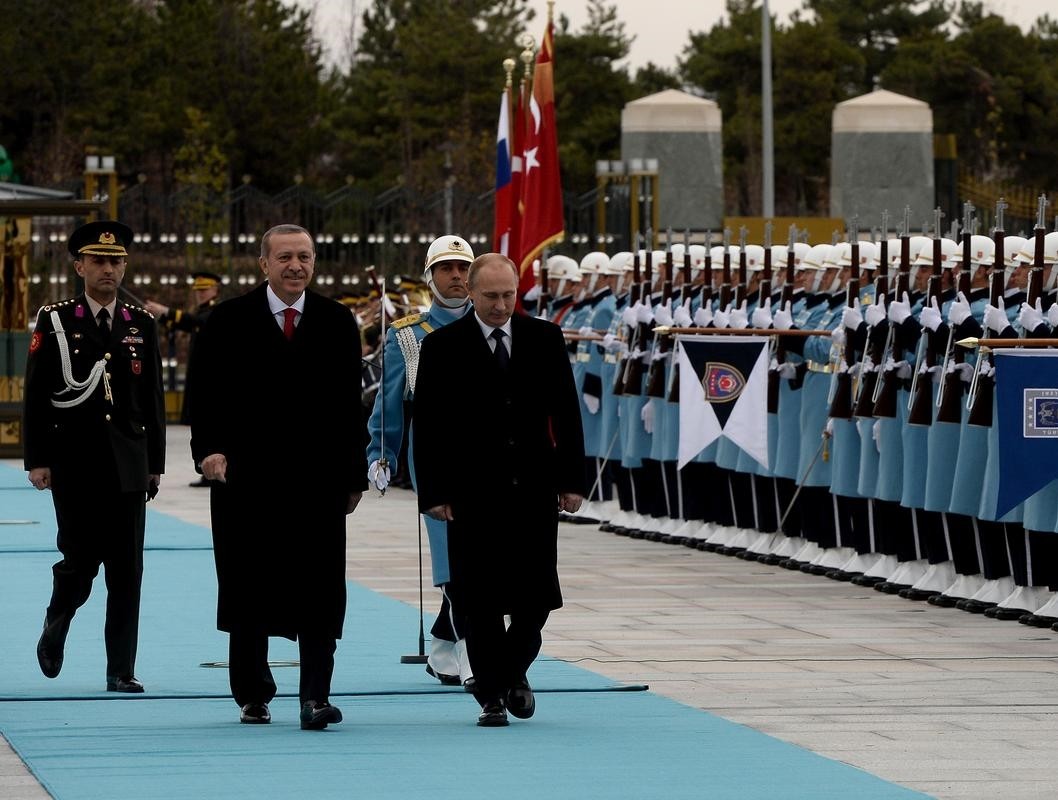 President Erdou011fan and his Russian counterpart Putin during an official greeting ceremony in Presidential Complex, Ankara
by daily sabah
Jan 12, 2017 12:00 am

Military sources said the memorandum of understanding was signed in order to strengthen Turkish-Russian cooperation against terror in Syria, ensure the flight security of warplanes belonging to both Russian and Turkish air forces during aerial operations against militant positions and to prevent undesirable incidents.

Another aim of the memorandum of understanding is to determine mechanisms regarding the coordination and cooperation in counterterror operations.

Despite tough times between Russia and Turkey last year because of the downed jet incident, their bilateral relations entered a new phase following a meeting of the countries' leaders in St. Petersburg on Aug. 9.

President Recep Tayyip Erdoğan and his Russian counterpart Vladimir Putin are also likely to meet next month within the scope of a Turkey-Russia High Level Cooperation Council (HLCC) meeting, claimed a diplomatic source.

Putin has also told Erdoğan before that his country is ready to increase cooperation with Turkey against terrorism. The parties have had numerous phone calls lately, in which both presidents discussed the humanitarian crisis in Syria and the need for cooperation against terror.

Russia has been carrying out airstrikes on Daesh positions in Syria's al-Bab since late December under the auspices of Turkey's Operation Euphrates Shield, which was launched with the Free Syrian Army (FSA) on Aug. 24 to clear terrorists from the Turkish-Syrian border.

Germany: Syria process should be carried out by U.N., not by Turkey, Russia

Speaking at a joint press conference with Egyptian Foreign Minister Sameh Shoukry in Berlin, Steinmeier said they discussed the Syrian ceasefire deal brokered by Russia and Turkey, adding that negotiations should be carried out by the U.N. after that point.

Steinmeier also drew attention to the humanitarian crisis in Syria, saying even though there has been a partial decrease in regard to the conflict, international foundations cannot give the necessary aid amount to people in the region.