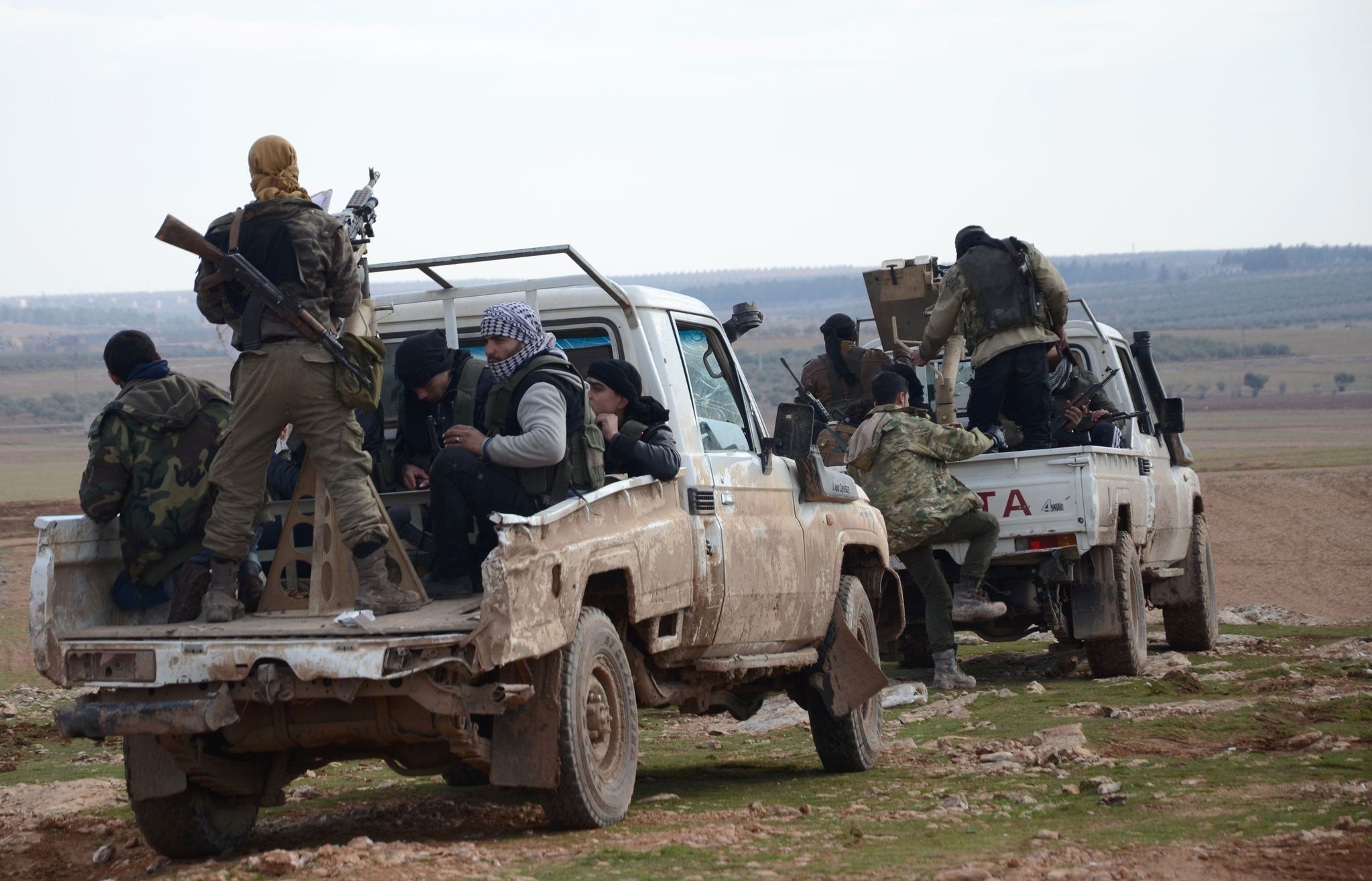 Fighters from the Free Syrian Army ride armoured pick up trucks during battles against Daesh militants near the town of Qabasin. (AFP Photo)
by Ragıp Soylu Jan 23, 2017 12:00 am

The U.S.-led international coalition against Daesh has accelerated its airstrikes in the vicinity of Syrian city al-Bab, where Turkish-backed forces have been battling the militant group in the recent weeks. The coalition conducted two airstrikes on Saturday and five airstrikes on Sunday in al-Bab, according to an information sheet distributed by the U.S. Central Command.

Turkey has been very outspoken against the lack of coalition support for its operations in northern al-Bab, which some Turkish and American sources suggested due to Turkey's intentions to seize YPG-held Manbij, following the completion of operations in al-Bab. Turkey considers YPG as a terror group due to its links with the PKK, while the U.S. denies their obvious connections, partnering with YPG against Daesh in Raqqa.

However, this has changed. Following Turkey's criticism, the coalition provided its first support in al-Bab earlier this month, and later on, Pentagon announced that it began to conduct intelligence, reconnaissance, and surveillance (IRS) operations in the Syrian city. Since then, it has regularly hit Daesh targets in support of Turkish maneuvers.

Latest coalition strike reports have shown a significant increase in airstrikes against Daesh in al-Bab, yet the reason behind the Pentagon's sudden change of heart is still not clear. A Pentagon spokesman underlined the strong cooperation between Turkey and the U.S. against terror groups in Syria, but did not provide an explanation as to why it is now supporting Turkish-backed forces.

Pentagon spokesman Navy Captain John Davis told reporters that Turkish-backed forces are currently trying to liberate an eight-square-kilometer area from Daesh in northwestern al-Bab. Pro-Assad regime forces are also on the move from the south of city, approximately at a distance of more than a dozen kilometers in the south.

Davis said the coalition didn't specifically hit the city of al-Bab but struck some targets in the southeastern part of the area.

A U.S. official told Anadolu Agency that the coalition listed the targets based on the IRS data obtained by unmanned aerial vehicles in the vicinity, implicitly stating that the strikes were not asked by the Turkish military. The official said that as negotiations for increased support and coordination were ongoing, the coalition was hitting self-developed targets upon the approval of the combined air operations center.

A senior Turkish military official also told Daily Sabah that the support provided by the coalition for Turkish operations currently seems satisfactory, but that it wasn't clear how long it would remain at this level. "We have no problems at this moment", he said.

Russia, on the other hand, took advantage of the U.S.'s reluctance to back Turkey in Syria and hit Daesh targets in al-Bab in joint operations with Ankara.

Two Russian Su-24Ms and a Su-34 bomber, as well as two of Turkey's F-16 and two F-4 fighter jets participated in the air strikes, according to the statement.