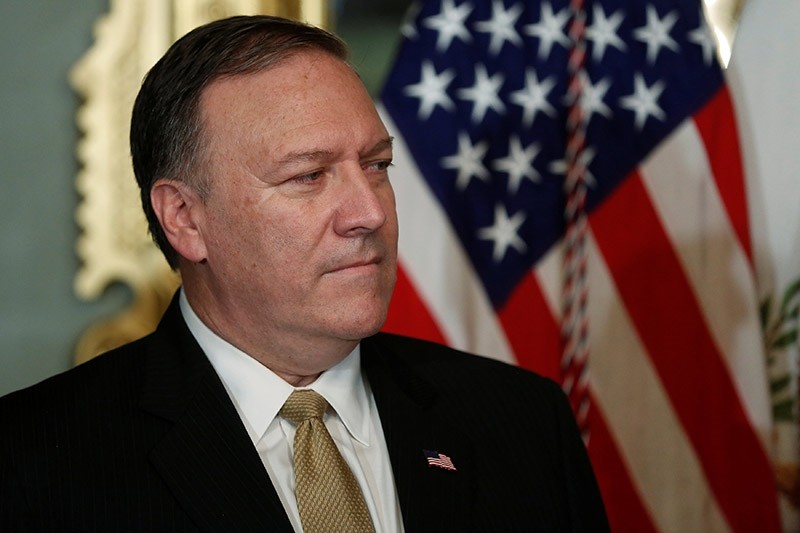 Mike Pompeo waits to be sworn in as director of the Central Intelligence Agency (CIA) in U.S. VP Mike Pence's ceremonial office in the Eisenhower Executive Office Building at the White House in Washington, U.S. Jan. 23, 2017. (Reuters Photo)
by Daily Sabah Feb 09, 2017 12:00 am

The U.S. Central Intelligence Agency's (CIA) newly appointed Director Mike Pompeo paid a visit to Ankara on Thursday, making it the first stop of his overseas visit. During his visit, Pompeo and his delegation met with his Turkish counterpart Hakan Fidan and Turkish military officials before being received by President Recep Tayyip Erdoğan.

Pompeo's visit to Turkey comes after U.S. President Donald Trump and President Erdoğan had a phone call early Wednesday which focused on the counterterrorism fight against Daesh, the PKK, its Syrian offshoot the Democratic Union Party's (PYD) armed wing the People's Protection Units (YPG) and the Gülenist Terror Group (FETÖ), according to Ankara sources.

As an active member of the U.S-led anti-Daesh coalition, Turkey's ongoing Operation Euphrates Shield in northern Syria backed by the Free Syrian Army (FSA) is currently centered on seizing the strategic city of al-Bab from Daesh militants. Prior to Pompeo's visit, Turkish Foreign Minister Mevlüt Çavuşoğlu said on Wednesday that after the liberation of al-Bab Turkish special forces will head to Raqqa, together with local Syrian forces. Turkey wants to be part of the operation to liberate Raqqa but does not want the YPG included in the alliance because the YPG is considered as the Syrian extension of the PKK, according to Ankara.

Furthermore, presidential spokesman İbrahim Kalın said on Wednesday that Turkey has already presented a detailed plan to wipe out Daesh from Raqqa, adding that discussions are under way. The details of Turkey's offensive in Raqqa were discussed during Pompeo's meetings in Ankara. Sources indicated that Ankara proposed to the U.S. side that after the liberation of al-Bab up to 10,000 FSA forces – with the support of Turkish Special Forces – could siege the Daesh stronghold of Raqqa. In recent days, President Trump's administration has scrapped the previous administration's plan to take Raqqa active participation of YPG forces. Hence, the details and implementation of Turkey's Raqqa proposal were also discussed between the Turkish and U.S. intelligence directors.

Another important issue on the agenda was extradition of the Pennsylvania-based FETÖ leader Fetullah Gülen, who is behind last year's failed July 15 coup attempt. Turkey is seeking Gülen's extradition from the U.S. to face trial in Turkey and Ankara hopes to see a faster extradition process under the Trump administration. Moreover, during the phone call with President Erdoğan, President Trump said Washington is considering Turkey's request on restricting Gülen's activities very seriously as the legal process continues. The process of Gülen's extradition is an issue that is awaiting an immediate solution, as Washington previously claimed that Turkey had not provided the necessary documents to fulfill the extradition request, despite Turkey's repeated emphasis that all the necessary documents had been sent to Washington. Turkey now expects the Trump administration to restrict Gülen's activities in the U.S. and for him to be placed under arrest for the duration of the ongoing legal process.