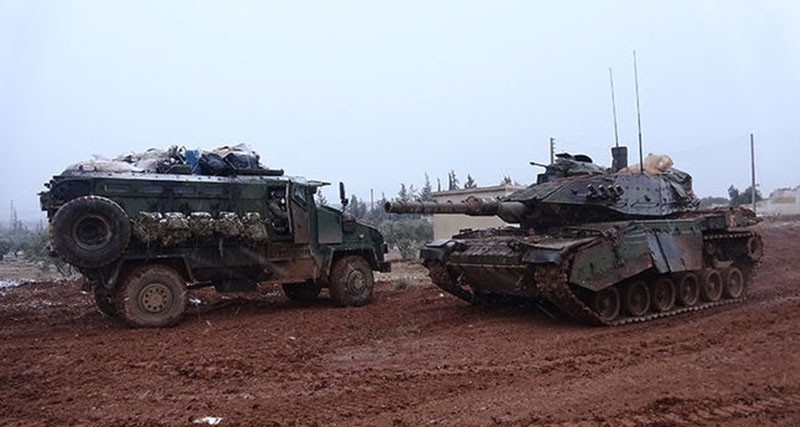 The Turkish army and the Turkey-backed Free Syrian Army have moved forward into the Syrian town of al-Bab in its fight against the Daesh terror group, destroying several strategic targets during airstrikes, shelling and killing more than 20 Daesh terrorists

Airstrikes and shellings carried out by Turkish military destroyed key Daesh targets and killed 23 Daesh terrorists as part of the operation to liberate the northern Syrian town of al-Bab from terrorists, the military said on Friday. A total of 154 identified targets were shelled by the Turkish military, destroying some shelters, defensive positions, command centers, weapons and vehicles used by Daesh terrorists.

Turkish warplanes also hit 11 Daesh targets, destroying seven buildings used as shelters, three headquarters and one arsenal belonging to the terrorist organization. The Turkish military continues to take all necessary measures to ensure the safety of civilians in the area, the statement added.

The Turkish army is supporting FSA fighters to liberate al-Bab, a strategic city for Daesh, from the terrorist group. Friday marks the 171st day since the city was surrounded by the Turkish-back FSA forces seeking liberated it.

The military action is part of the Turkish-led Operation Euphrates Shield, which began in late August to improve security, support coalition forces, and eliminate the terror threat along Turkey's border using FSA fighters backed by Turkish artillery and jets. Ankara has already vowed that Operation Euphrates Shield will continue in Manbij and Afrin, which are both held by the PKK's Syrian offshoot, the People's Protection Units (YPG), after al-Bab is liberated.

Meanwhile, Russia confirmed on Thursday that its fighter jets mistakenly targeted Turkish soldiers near Syria's al-Bab on Thursday, killing three soldiers and wounding 11 others, which was later confirmed by Turkish military sources in an official statement.

Three soldiers died at the scene, whereas 11 others were injured, including one in critical condition. The wounded soldiers were transferred to hospital after an initial medical intervention.

Prime Minister Binali Yıldırım on Friday said that the Kremlin had offered condolences for the losses and that the necessary cautionary steps will be taken to avoid such mistakes from happening, while Kremlin Spokesman Dmitry Peskov claimed on Friday that Turkey provided the coordinates for the Russian airstrike. The Kremlin said on Thursday that Russian jets intended to target Daesh and other terrorist positions in the area.

On Friday, Turkish military sources responding to Peskov's statement said the Turkish troops were located in the same coordinates for 10 days. However, upon a rocket targeting the area where Turkish troops were located on Feb. 8, the Turkish Armed Forces (TSK) warned the Russian military personnel at Humeymim Command Center, and later relayed the coordinates for the location to the Russian military attache around 11:11 p.m. — local time in Ankara.

Meanwhile, Russia intervened to halt a clash between Syrian regime forces and the Turkey-backed Free Syria Army (FSA) in northern Syria, sources on both sides said on Friday, the first confrontation between them as both sides fight Daesh in the area.

Russia and Turkey have backed opposing sides in the war but recently started cooperating over Syria, brokering a truce between regime forces and the opposition and working together to try to revive peace talks.