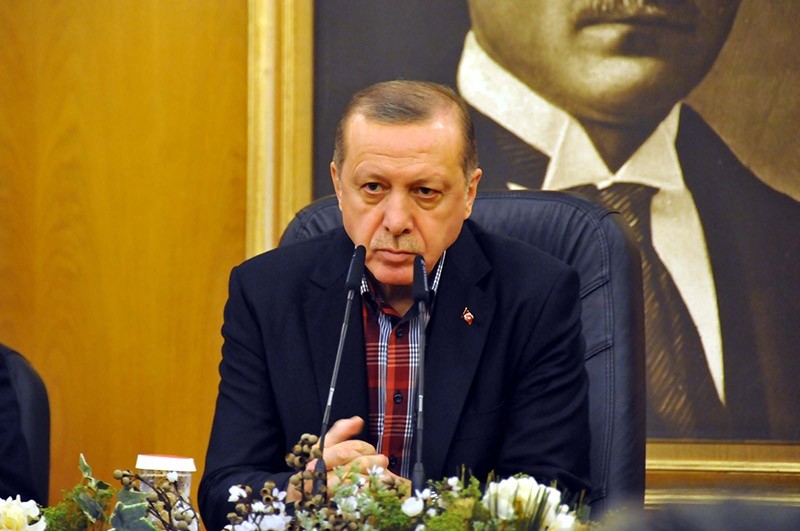 Ankara has reiterated its position on clearing Daesh and the PKK terrorist organization's Syrian offshoot the Democratic Union Party (PYD) from northern Syria, ultimately establishing a 5,000-square-kilometer, terror-free zone that will be used for the resettlement of Syrian refugees.

Speaking to reporters before an official three-day visit to Bahrain, Saudi Arabia and Qatar, President Recep Tayyip Erdoğan said that the ultimate aim of Operation Euphrates Shield is to clear terrorists from the town of al-Bab in northern Syria before moving on to Raqqa and Manbij.

"The Turkish Armed Forces [TSK] along with the Free Syrian Army [FSA] have besieged al-Bab and developments are moving forward as planned. Daesh is in the process of leaving al-Bab since our forces entered the city center. The fall of al-Bab is merely a matter of time. We are trying to eliminate terror from the region. That aim is about to be completed in al-Bab before we move on to Raqqa and Manbij after this. Our ultimate goal is to clear Daesh from the region. As of now, Daesh's actual center is Raqqa," Erdoğan said.

Commenting on Turkey's goals to establish a terror-free zone in northern Syria, Erdoğan said that the plan has been communicated to U.S. President Donald Trump as well as German Chancellor Angela Merkel, adding that the establishment of a buffer zone in the designated region will help minimize the volume of migrants flowing from Syria to neighboring countries in the region.

The establishment of a designated zone for refugees in northern Syria, which has been referred to as a "terror-free zone" by President Erdoğan, has also been voiced. They are similar to the "safe zones" talked about by the Trump administration.

Trump had said on Jan. 25 that he will order the State Department and the Department of Defense to propose plans to set up a safe zone for refugees fleeing the Syrian conflict since 2011, a proposal Turkey has backed for several years, despite former U.S. President Barack Obama's reluctance.

According to Ankara's plans, a 5,000-square-kilometer area will be designated as a "terror-free zone," where Syrian refugees will be placed in order to spare them from having to flee their country. Currently, an approximate 2,000-kilometer-square area has been freed from Daesh, including the towns of Azaz, Jarablus, al-Rai, and Dabiq, a town which has a significant symbolic value for Daesh.

Turkey launched Operation Euphrates Shield on Aug. 24 last year to clear its border area of terrorist groups by supporting the FSA. Following control of the towns of Jarablus and al-Rai, FSA fighters launched an operation to capture Daesh-held al-Bab in early December, reaching the outskirts of the town by late December and currently the forces have entered the city center.

Al-Bab is one of the two objectives of Operation Euphrates Shield, with the other being Manbij, which is currently controlled by the Syrian Democratic Forces (SDF) dominated by the PKK's Syrian offshoot, the Democratic Union Party (PYD)'s armed wing, the People's Protection Units (YPG). Turkey views the PYD as the Syrian-offshoot of the PKK, a group officially designated as a terrorist group by Turkey, the U.S. and the EU.

The clashes in Al-Bab have proved the toughest in the campaign, with Turkish military fatalities surging. One Turkish soldier was killed and three others wounded in clashes with Daesh on Sunday, raising the number of Turkish troops killed in the Syria offensive to 67.

The three injured troops were evacuated from Al-Bab and taken to hospitals in Turkey's Kilis and Gaziantep provinces near the Syrian border.

Al-Bab is the Daesh's last stronghold in the northern province of Aleppo.

Turkish forces have advanced into the city from the west in recent days, and now control around 10 percent of the city and all of its western suburbs, the Observatory said.

Regime forces and allied militia have also made gains south of al-Bab, near the town of Tadef, since Friday, reaching an area 1.5 kilometer from the city, it said.

The FSA's advance risks putting them in direct conflict with Assad regime forces who are closing in on the city from the south.