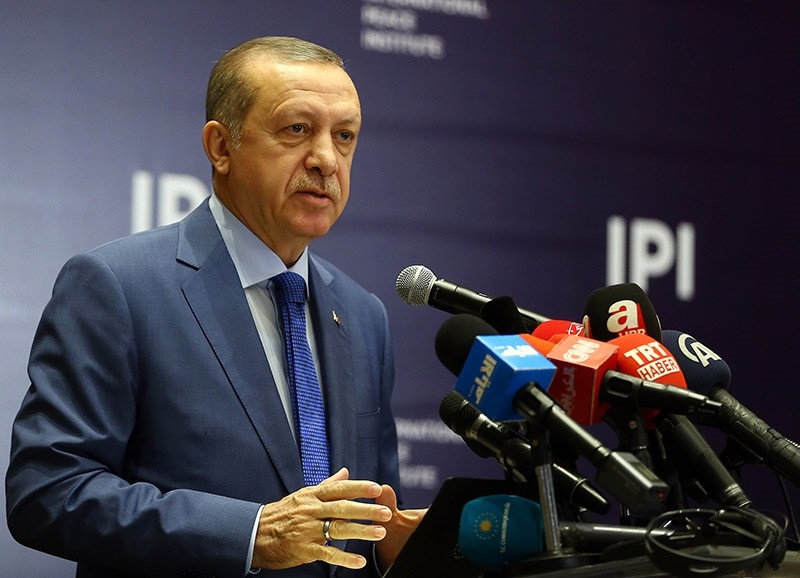 Plans to establish a terror-free zone in northern Syria through the elimination of Daesh and the PKK terrorist organization's Syria-affiliate, the YPG, from areas bordering Turkey was reiterated by President Recep Tayyip Erdoğan yesterday during his official visit to Bahrain.

"We plan to create a terror-free safe zone 4,000 to 5,000 square kilometers inside Syria, the same way we have transformed a 2,000-square-kilometer area into a safe and secure region free of terrorists," President Erdoğan said during his speech at the International Peace Institute conference in the Bahraini capital Manama, adding that the Turkish-backed opposition fighters were also working towards this regard.

According to Ankara's plans, a 5,000-square-kilometer area will be designated as a "terror-free zone," where Syrian refugees will be placed in order to spare them from having to flee their country.

The area approximately 2,000-kilometer-square in size that has been freed from Daesh, includes the towns of Azaz, Jarablus, and al-Rai as well as Dabiq, which has a significant symbolic value for Daesh.

The president also said that the designated territory will be used to establish residential areas that will host mostly Arab and Turkmen civilians and a professionally trained and equipped national army will also be needed to be deployed to ensure the terror-free zone functions properly.

The establishment of a designated zone for refugees in northern Syria, which has been referred to as a "terror-free zone" by President Erdoğan, has also been voiced elsewhere. They are similar to the "safe zones" talked about by the Trump administration. President Donald Trump had said on Jan. 25 that he will order the U.S. State Department and the U.S. Department of Defense to propose plans to set up a safe zone for refugees who have been fleeing the Syrian conflict since 2011, a proposal Turkey has backed for several years, despite former U.S. President Barack Obama's reluctance.

Highlighting Turkey's key role in the fight against Daesh, President Erdoğan said that Turkish forces have killed over 3,000 Daesh terrorists in its operations conducted in northern Syria. He added that Turkey will continue to welcome civilians fleeing conflict in the region despite the aim of creating a terror-free zone, as Turkey will continue to have an open-door policy for those running away from the bombs.

"With Operation Euphrates Shield, Turkey was able to push back Daesh and PYD (the PKK terrorist organization's Syrian offshoot, the Democratic Union Party) terrorists and now we aim to clear al-Bab," Erdoğan said, adding that Turkey will then head east and also plans to create the terror-free zone if coalition forces agree to take joint steps together.

Meanwhile, Deputy Prime Minister Numan Kurtulmuş speaking at a press conference following the Cabinet meeting held yesterday at the Çankaya Prime Ministerial Office, underlined that the operations against terror groups in Syria is necessary for Turkey's national security. The Cabinet meeting, which lasted more than four hours, addressed a number of topics including Turkey's ongoing Operation Euphrates Shield against terror groups including Daesh. Kurtulmuş echoed President Recep Tayyip Erdoğan's remarks on pushing the counterterrorism operation toward Raqqa. He said, "Like our president stated, Turkey may take steps forward toward the elimination of Daesh in both Raqqa and Manbij.

"The operation that is being conducted by Turkey in Syria has nothing to do with Turkey eyeing Syrian territory or an operation for mere pleasure. I'd like to underscore that these operations are being conducted as part of the necessity to protect Turkey's national security. We have experienced security threats against Turkey together. We have had missiles targeting us from Syria as Daesh, the PKK and the PYD [Democratic Union Party] continue their activities there," Kurtulmuş added.

Pointing out the Turkish Armed Forces (TSK) and Free Syrian Army's success in Jarablus and al-Bab as part of the operation, Deputy Prime Minister Kurtulmuş further drew attention to the agreement between Turkey and the U.S. regarding the PKK-affiliate PYD's withdrawal from the east of Manbij. He said, "We are still waiting for the agreement [to be put into effect]."

"The Turkish Armed Forces [TSK] along with the Free Syrian Army [FSA] have besieged al-Bab and developments are moving forward as planned. Daesh is in the process of leaving al-Bab since our forces entered the city center. The fall of al-Bab is merely a matter of time. We are trying to eliminate terror from the region. That aim is about to be completed in al-Bab, and then we will move on to Raqqa and Manbij. Our ultimate goal is to clear Daesh from the region. As of now, Daesh's actual center is Raqqa," Erdoğan said on Sunday during a press conference in Istanbul before his departure for Bahrain.

Daesh has nothing to with Islam

Once again, the president highlighted that Daesh has nothing to do with Islam and criticized those who try to associate all Muslims with the terrorist organization.

"Nobody should associate terrorism or radicalism with Islam because Islam does not permit radicalism," Erdoğan said.

"There are provocative situations around the world where they put our religion on the same side as terrorism, particularly in the West. We see these as provocations. We say please avoid these provocations," the president said, adding that this discourse feeds into the hands of terrorist groups.

The president also talked about Turkey's contribution to the refugee crisis, saying that the country has spent over $25 billion for around three million refugees, whereas the European Union has failed to fulfill its pledge to give three billion euros in aid.

Commenting on the Israeli government's new decision to build new settlements in the east Jerusalem and the West Bank areas, the president said these were clear provocations.

"The Palestine issue is a deep pain in our heart and consciousness," President Erdoğan said, underlining that Turkey will always stand by the people of Palestine.

He added that an independent state of Palestine within the borders of 1967, with East Jerusalem as its capital, is the solution to establishing a permanent peace in the region.

Criticizing the establishment of new settlements in the occupied territories, the president added that the settlements, despite the U.N. Security Council's resolutions, are provocations. He also added that the normalization process between Israel and Turkey is an attempt to establish permanent peace in the region, and finding a solution to the Palestine issue.

Turkey has previously condemned the construction of settlements and has urged Israel to comply with international law.