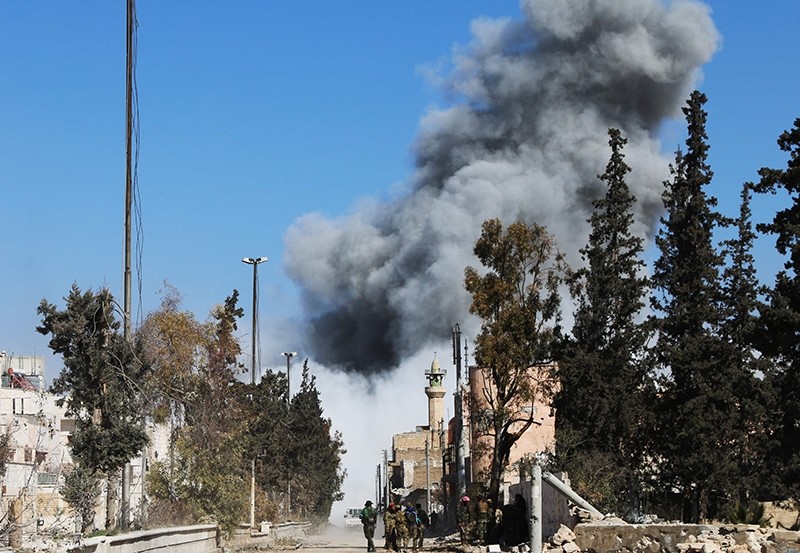 Turkish forces and the Free Syrian Army entered the city center of Daesh stronghold al-Bab and started to clear mines and explosives on Thursday, with Turkey likely to advance through another Daesh stronghold, al-Bab, and PYD-held Manbij, according to officials

Işık told reporters that Turkey-backed FSA forces have taken almost complete control of al-Bab from Daesh and are working to clear mines and explosives.

Earlier on Thursday, the Turkish military said in a statement that the FSA forces have taken control over most of the town and have liberated two more districts from Daesh terrorists.

Later in the day, FSA forces announced on Thursday that they have taken full control of al-Bab.

"We are announcing al-Bab as being completely liberated, and we are now clearing mines from the residential neighborhoods," Ahmad Othman, commander of the Sultan Mourad opposition group told the AFP.

The FSA released drone footage later in the day showing the current situation in the city.

Also, according to an Anadolu Agency (AA) correspondent in al-Bab, the town center has been entirely cleared of Daesh terrorists as part of Turkey's ongoing Operation Euphrates Shield.

Meanwhile, military sources have neither confirmed nor refuted the reports and have said the forces are still carrying out operations to clear mines and explosives from the city.

Turkey launched Operation Euphrates Shield on August 24, 2016, declaring that it was exercising its rights to self-defense codified under the U.N. Charter Article 51. A National Security Council press release stated that the operation's objectives were to maintain border security and drive Daesh terrorists away from the Turkish-Syrian border. The operation, which began last summer, relies heavily on FSA fighters backed by Turkish artillery and air support.

Until now, Turkey and the FSA have cleared some of the main strongholds of Daesh, including Dabiq, Jarablus and al-Bab, and are likely to continue with clearing Manbij and Afrin of Democratic Union Party (PYD) terrorists, the PKK's Syrian offshoot.

Earlier this month, President Recep Tayyip Erdoğan said Turkey's next target after al-Bab's liberation is the Syrian town of Manbij, and it is crucial to clear the PYD from the area as soon as possible because the area is demographically dominated by Arabs. He added that after Manbij, the Turkish army likely to carry out a military operation in Raqqa, the Daesh stronghold.