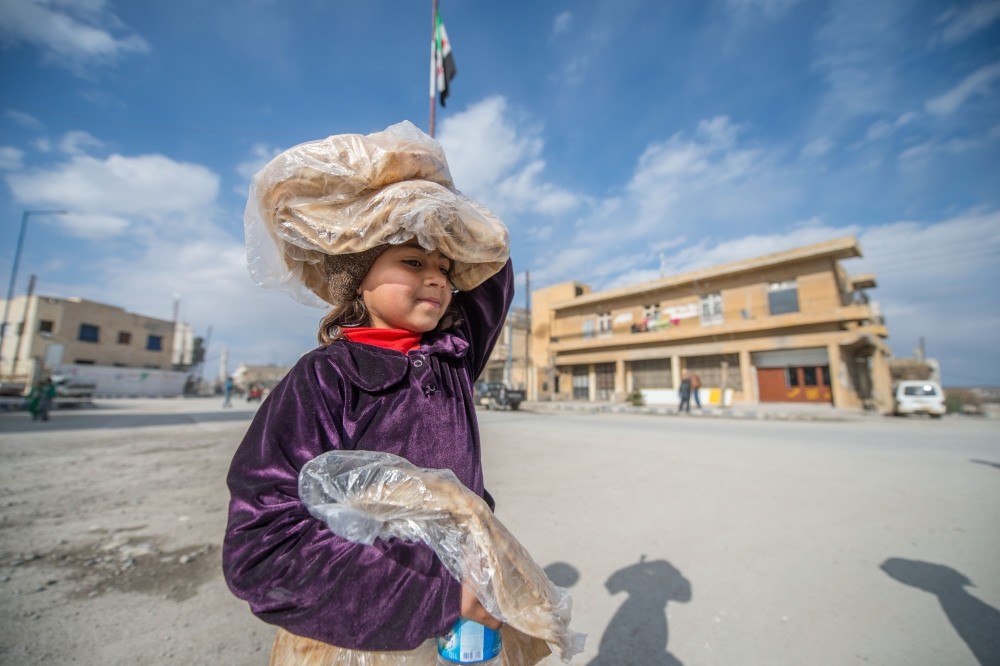 After the Turkish military-backed FSA liberated Jarablus, thousands of people returned to the town to live in a peaceful environment.
by Daily Sabah with Agencies Feb 23, 2017 12:00 am

The legend that the PKK's Syrian offshot the PYD is the only option on the ground to fight Daesh collapsed with the liberation of the northern Syrian town of Jarablus, presidential spokesman İbrahim Kalın asserted

Presidential spokesman İbrahim Kalın asserted Wednesday that the myth that the PKK's Syrian offshoot the Democratic Union Party (PYD) fights Daesh better than anyone else collapsed after the Turkish military, in cooperation with the Free Syrian Army (FSA), liberated Jarablus.

Speaking at a press conference at the presidential complex, Kalın said that the PYD received help by claiming that it was fighting Daesh on the ground. Stressing that this was in fact incorrect, Kalın said that Ankara ended the PYD myth with the liberation of Jarablus as part of Operation Euphrates Shield.

Kalın suggested that taking control of Syrian soil was only possible by forging alliances with the right groups on the ground. The spokesman added that Ankara was active on the Syrian issue both on the ground and at the table.

Seizing control of Syria's al-Bab from Daesh is important to wiping out the militant group from its stronghold of Raqqa, Kalın said.

Meanwhile, Ankara said that fewer than 100 Daesh terrorists were still holed up in the flashpoint Syrian town of al-Bab. Speaking to news broadcaster NTV, Defense Minister Fikri Işık said half of the town of al-Bab was in the hands of Turkish troops and allied pro-Ankara FSA fighters.

Turkish forces have killed at least 14 Daesh terrorists in northern Syria in the last 24 hours. In a statement released on Wednesday, the Turkish General Staff said that Turkey's land and air forces hit 110 Daesh targets as part of the ongoing Operation Euphrates Shield. A total of 89 Daesh targets, including shelters, command and control facilities, weapons and vehicles had been hit, the statement said.

In addition, Turkish fighter jets carried out 21 airstrikes and destroyed 18 buildings used as shelter, two weapons depots and an armed vehicle, it added.

President Recep Tayyip Erdoğan said recently that Turkey's next target after the liberation of al-Bab will be the Syrian town of Manbij, adding that it was crucial to clear the terrorist Democratic Union Party (PYD) from the area.

Meanwhile, speking on the issue on Tuesday in Cyprus, Çavuşoğlu said the next target in Operation Euphrates Shield is Raqqah, a city on the northeast bank of the Euphrates River.

"Turkey's manner is quite clear. We know the area and Syria. The Syrian people are our brothers and sisters," he said.

Çavuşoğlu also said the U.S. should reconsider its decision to support the PYD/YPG - affiliated with the terrorist PKK - in its campaign against the Daesh terror group.

"We can take steps in Raqqah with the right groups with the right strategy, not those who want to achieve their own purposes through ethnic cleansing," the minister said.

Çavuşoğlu also said leaving Raqqah in the hands of the terrorist PKK/PYD would pose a serious threat to the region.

"Involving a Shia militia in a 99 percent Sunni Arab city is dangerous. That's why [the Shia] Hashdi Shabi hasn't entered Mosul up to today."

"Likewise, it is so dangerous to involve the PKK and YPG terror groups [in the Raqqah operation]," Çavuşoğlu added.

The Syrian regime and the PKK's Syrian offshoot the PYD have consolidated their relations in the northern part of the war-torn country, Turkish security sources said.

The regime supported the terror group in establishing training centers in the Sheikh Maqsoud and Hellok regions of the northern province of Aleppo, the sources said on condition of anonymity due to restrictions on speaking to the media.

A part of the Turkmen-populated area of Hellok was captured by the PYD/PKK terrorist group at the end of last year. Now the region is controlled by both regime forces and PYD/PKK elements.

Meanwhile, the PYD made advances towards the eastern Syrian city of Deir al-Zor. Backed by airstrikes from the U.S.-led coalition, they have seized swathes of territory in northern Syria from Daesh. But the Deir al-Zor province, which lies just east of Raqqa, is for now almost completely held by Daesh. Daesh also holds most of the provincial capital by the same name, and have been battling Assad regime forces to overrun the city.

Last month the regime allowed the terror group to open another "terror academy" along Turkey's border in the northern Aleppo city of Afrin, where hundreds of terror elements have been trained by foreign instructors to use heavy weapons, bombs, and combat techniques. The newly formed camps in Aleppo will be used for similar armed training, the sources noted.

Relations between Damascus and the terror group have reached a new high, as regime aircraft carried scores of wounded terrorists from Kobani and Afrin to the Damascus public hospital, the security sources said.

Moreover, two top-level PKK members based in Mt. Qandil, the so-called headquarters of the terror group in northern Iraq, were also taken to the same hospital by regime planes after they crossed into Syria, they added.