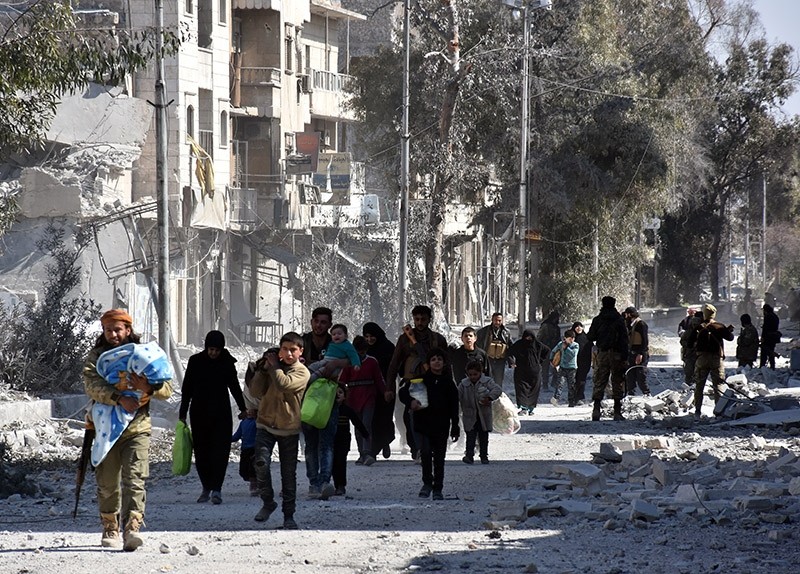 The Turkish military said Friday that the FSA has totally liberated the Daesh stronghold al-Bab. Operation Euphrates Shield forces are now likely to advance through PYD-held Manbij and Daesh-stronghold Raqqa, as previously stated by Turkish officials

The Turkish military, in cooperation with the Free Syrian Army (FSA), has been liberating one Daesh stronghold after another in Syria since the launch of Operation Euphrates Shield on Aug. 24, 2016. The Turkish Armed Forces (TSK) Friday released a written statement, announcing the victory in al-Bab over the Daesh terrorists. The Turkish military-backed FSA has been fighting to capture the strategic town for nearly four months. Following the liberation of Jarablus, Dabiq and al-Bab, Ankara turns its attention to the PKK's Syrian offshoot Democratic Union Party (PYD)-held Manbij and Daesh's so-called capital of Raqqa. As President Recep Tayyip Erdoğan and Prime Minister Binali Yıldırım have already stressed, the FSA will march toward PYD-held Manbij and Daesh-held Raqqa to clear the areas from terrorists.

​"That aim is about to be achieved in al-Bab before we move on to Raqqa and Manbij after this. Our ultimate goal is to clear Daesh from the region," Erdoğan said earlier in February. Meanwhile, two Turkish soldiers died in an operation to clear out landmines and improvised explosive devices (IEDs) planted by Daesh terrorists in an area southeast of northern Syria's al-Bab, the military said yesterday. The TSK said in a statement that the two soldiers died in an explosion, while clearing landmines at an intersection near the town of Tadef, which is located southeast of al-Bab. It added that three others were injured. The wounded soldiers were immediately brought to a nearby hospital for medical treatment.

Regarding the incident, Prime Minister Binali Yıldırım said that Turkish forces are carefully carrying out operations to clear mines and hand-made explosives from the city, but unfortunately such incidents happen.

In another speech early yesterday, Prime Minister Yıldırım said that Turkey is the only country that is actively fighting Daesh in Syria, as well as other terrorist organizations. Speaking at an opening ceremony of environmental projects in Ankara, Yıldırım said the world was pretending to fight against the terror group, while Turkey was doing the actual fighting. "Show me a country in the world that is fighting against three terrorist organizations at the same time," Yıldırım said.Chief of Staff Gen. Hulusi Akar went to military headquarters in Kilis province near the Turkish-Syrian border where Operation Euphrates Shield has been managed. Akar received information from officers regarding the latest situation in al-Bab and the process of clearıng mines and explosives. Also, according to a TSK statement, a 2,225-square-kilometer area has been liberated and is now under the control of the FSA.

Turkey launched Operation Euphrates Shield on Aug. 24, 2016, declaring that it was exercising its right to self-defense codified under U.N. Charter Article 51. A National Security Council press release stated that the operation's objectives were to maintain border security and drive Daesh terrorists away from the Turkish-Syrian border. The operation, which began last summer, relies heavily on FSA fighters backed by Turkish artillery and air support.

Until now, Turkey and the FSA have cleared some of the main strongholds of Daesh, including Dabiq, Jarablus and al-Bab, and are likely to continue by clearing Manbij and Afrin of Democratic Union Party (PYD) terrorists, the PKK's Syrian offshoot.

At least 60 people, including Turkey-backed Free Syrian Army (FSA) fighters died and dozens of others were wounded after a car bomb attack in northern Syria's al-Bab, reports said on Friday.

Those wounded in the car bomb attack were brought to an evacuation point in the Turkish border province of Kilis where Turkish ambulances were already waiting to bring injured people to nearby hospitals.

A total of 42 people were brought to the Kilis State Hospital for medical treatment, while several others were sent to neighboring provinces, including Gaziantep.

The Turkey-backed rebels on Thursday drove Daesh from al-Bab, the terrorist group's last significant stronghold in northwest Syria, along with two smaller neighboring towns of Qabasin and al-Bezah, after weeks of street fighting.

The car bomb struck military and security offices in Sousian, which is behind opposition lines about 8 km (5 miles) northwest of al-Bab, the Syrian Observatory for Human Rights, a Britain-based war monitor, said.

Later on in the day, Syrian activists said that a second car bomb exploded near Syria's al-Bab captured by Turkey-backed FSA, killing at least 8 people.