Turkey warns US against partnering with PYD for Raqqa offensive 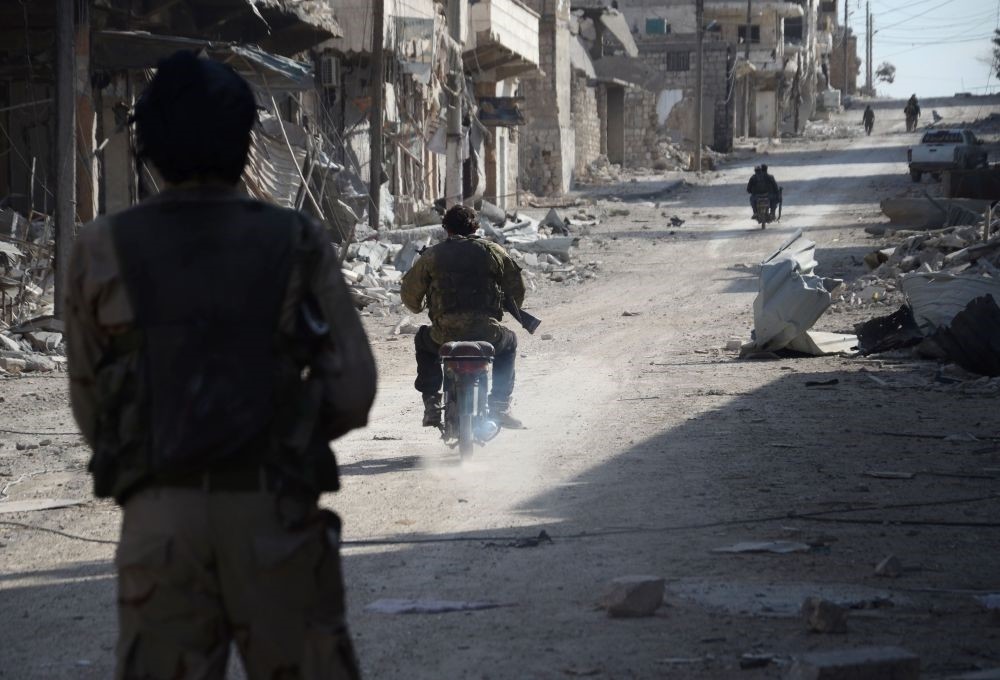 Syrian opposition patrol in the northwestern border town of al-Bab on Feb. 24, 2017 after the Turkish-backed FSA announced the recapture of the town from Daesh.
by Daily Sabah Mar 01, 2017 12:00 am

While the ruling AK Party and opposition MHP reiterated that U.S. cooperation with the PKK-linked YPG in Syria is not acceptable, the president and the PM said that Turkey is continuing discussions with the U.S.-led coalition and Russia over possible scenarios on liberating Raqqa from Daesh

President Recep Tayyip Erdoğan, leaders of the ruling Justice and Development Party (AK Party) and the opposition Nationalist Movement Party (MHP), all touched on a possible operation on Daesh bastion Raqqa yesterday, underlining the necessity of eliminating terror threats near Turkey's borders. President Erdoğan said that Turkey was coordinating with Russia and the U.S.-led coalition, regarding its possible involvement in the Raqqa operation, while making clear that the country would not accept any involvement of the PKK-affiliated Democratic Union Party (PYD) and its armed wing, the People's Protection Units (YPG), in the operation.

Speaking at a weekly parliamentary meeting, AK Party Chairman and Prime Minister Binali Yıldırım echoed the president's remarks, and confirmed that discussions with the U.S., coalition forces and Russia, on a joint Raqqa operation, were ongoing.

Meanwhile, MHP Chairman Devlet Bahçeli, speaking at the party's parliamentary group meeting, said "Syria must be completely purged of all terrorist for the sake of Turkey's national security."

According to high-level security officials, Turkey was also planning to establish a Special Forces unit for the Raqqa operation and was ready to prioritize Raqqa over Manbij, if an agreement between Turkey and the U.S. could be reached.

On that note, President Erdoğan said that Ankara was in coordination with Moscow and the U.S.-led coalition over Turkey's possible involvement in the operation to liberate Raqqa.

"If our allies are truly sincere, we tell them, 'We will act with you for as long as we are cleansing Raqqa of Daesh presence and we will give it back to its original owners.' We do not have plans to stay there [in Syria]," Erdoğan said told a press conference held at Istanbul's Atatürk Airport, prior to the president's flight to Pakistan.

He added that although the liberation of al-Bab marked a major success in the war against Daesh, it did not mean the operation has ended, as Ankara was looking to take the offensive to Manbij and Raqqa. President Erdoğan also noted that about 3,000 terrorists, both from Daesh and the YPG, were killed during Operation Euphrates Shield, which began last August.

He expressed his support for the TSK operation in Syria against Daesh said that Turkish troops on the ground in Syria were successful in taking al-Bab under their control.

Regarding the possible Raqqa operation, the MHP leader pointed out the uncertainties on the ground and refuted critics who did not support Turkey's plans for counterterror operations against Daesh in Raqqa. He said, "Those who question Turkey on entering Raqqa must first criticize the global actors who aim to block Turkey and establish a 'Kurdistan.' If Turkey was not actively participating on the ground then terrorism and the advance of separatists would be impossible to stop. Our country [Turkey] must crown the Operation Euphrates Shield, at once." Adding that developments in Iraq and Syria must be interpreted from a geopolitical position, Bahçeli recalled the urgent need for dislodging the terrorist groups from the region that would ensure Turkey's own security. "In northern Syria, 230 neighborhoods and 1,925 square meters of area have been liberated of Daesh terrorists. The Turkish military has fearlessly and fought bravely [against the terrorist groups]."

He further emphasized on the fact that all elements of terrorist groups should be eliminated from Syria for the sake of Turkey's national security.

"The elimination process of terror groups must be conducted without exception, as all terrorist groups including Daesh, the PYD and the YPG must be destroyed by the Turkish military forces."

Echoing the MHP chairman's remarks, Prime Minister Binali Yıldırım affirmed that discussions between Turkey, the U.S. and Russia were ongoing. He was addressing a large crowd during a parliamentary group meeting of the AK Party, where he stressed that an agreement on the Raqqa operation will not be reached as long as the PYD/YPG was part of the solution. Yıldırım added, "No certain decision has been reached regarding the Raqqa operation," and highlighted that Turkey would withdraw its support for the operation if PKK-affiliated PYD/YPG took part "In Raqqa, if the PKK's cousins the YPG and PYD are used as a supportive element, we will not join the operations. We cannot work side-by-side with any terrorist groups. We do not participate in any operation with the relatives of the PKK terror group, who has harmed the Turkish nation and has wasted our energy," he said. Yıldırım also issued a message to the U.S. administration, saying that using a terrorist group to destroy another terrorist group was not a logical solution. "This method does not fit the Turkey-U.S. strategic and historical partnership," Yıldırım said.
RELATED TOPICS