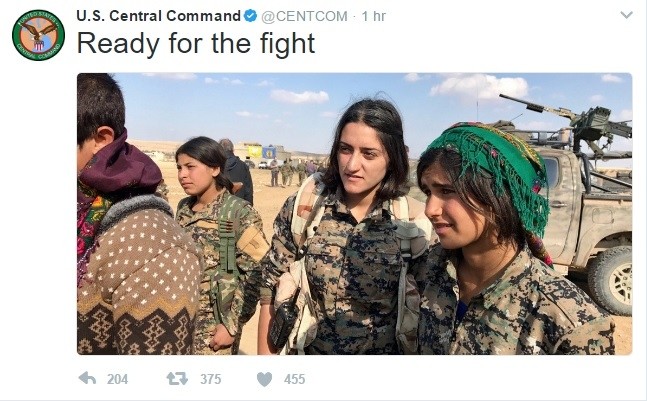 by Daily Sabah Mar 01, 2017 12:00 am
The United States has been providing strong backing to the PKK-affiliated People's Protection Units (YPG) since the Barack Obama administration, and it will continue to promote YPG terrorism and its child soldiers according to a recent tweet by the U.S. Central Command (CENTCOM).

When queried, a statement by the defense department said the U.S. presently has no condition concerning age when supplying arms and weapons to groups in Syria, turning a blind eye to child recruitment by the YPG. In addition, a Pentagon official told Anadolu Agency (AA) that even though it was not acceptable for someone under the age of 18 to be armed and sent to a war, given "the situation in the region and the cultural structure," it was not surprising. He stressed that the U.S. only provides equipment to groups in Syria and asks them to fight Daesh only. "We do not look into who they recruit," he said.

The U.N. Convention on the Rights of the Child states regarding the involvement of children in armed conflict: "Armed groups that are distinct from the armed forces of a State should not, under any circumstances, recruit or use in hostilities persons under the age of 18 years."

Responding to an AA question regarding the subject, Pentagon spokesman Naval Capt. Jeff Davis said that he had no knowledge regarding the issue. "I do not know if waging a war has an age limit," he said.

The U.S. considers the PKK's Syrian offshoot Democratic Union Party (PYD) and its armed wing, the YPG, an effective force in the fight against Daesh in Syria while Turkey, a NATO ally, argues that Washington has joined forces with a terrorist group.

The PYD/YPG has recently mandated conscription for all girls and boys over 16 years of age in the city of Manbij, located on the west banks of the river Euphrates. AA citing local sources reported that the PYD/YPG recruits and trains child soldiers before sending them to active PYD fronts on a $100 payroll. The groups had previously implemented such impositions in the Afrin district.

It also has a track record of forcing children to fight on their side in the Syrian civil war. On Sept. 1, a video of a little girl reportedly being told to shoot an automatic rifle in a PYD-ruled area in northern Syria, went viral. The video has been described by Twitter users as further proof of child abuse by the terrorist group.

The Yazidis, a regional minority group, have also suffered from oppressive acts by PKK and PYD. The terrorist groups drove Yazidi children onto the battlefront, either by deceiving them or kidnapping them in Iraq and Syria, Sinjar District Governor Mehma Halili from the Kurdistan Democratic Party (KDP) stated last year.
RELATED TOPICS