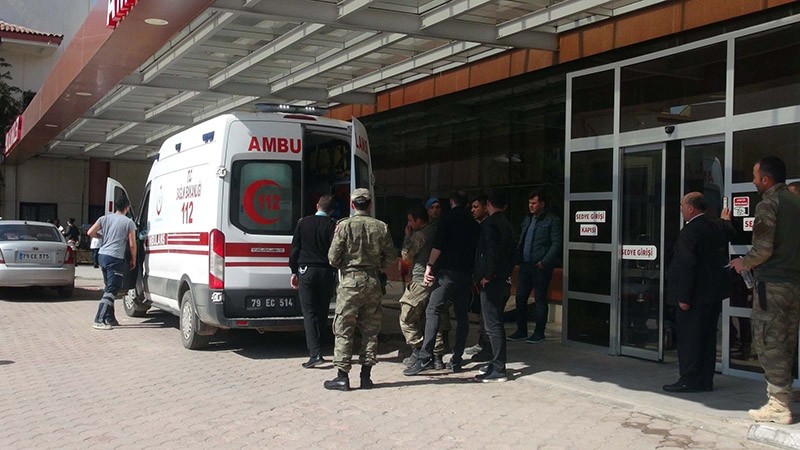 Four Turkish soldiers wounded in YPG terrorist attack have been taken to hospitals in southeastern Turkey's Gaziantep and Kilis province. Kilis, Turkey on March 6, 2017. (DHA Photo)
by Daily Sabah with IHA Mar 06, 2017 12:00 am

Terrorists from the PKK's Syrian affiliate People's Protection Units (YPG) have shelled the positions of Turkish soldiers with mortars in the countryside near Syria's al-Bab, wounding four servicemen.

The injured Turkish soldiers are reportedly specialized sergeants who had been transferred to Syria, under the scope of Operation Euphrates Shield, from the 49th commando brigade stationed in Turkey's Muş province.

The wounded servicemen were immediately taken to Turkish hospitals in Gaziantep and Kilis.

The YPG is the armed wing of the Democratic Union Party (PYD), the Syrian offshoot the PKK terrorist group. The YPG terrorists also dominate the U.S.-backed Syrian Democratic Forces (SDF).

On Aug. 24, 2016, Turkey declared that is was exercising its rights of self-defense codified under the U.N. Charter Article 51, and launched Operation Euphrates Shield to clear terrorist groups along Turkey's Syria border, including the YPG and Daesh.

Turkey has reiterated that it will not allow an independent terrorist state to be present along its borders.

Turkish Foreign Minister Mevlüt Çavuşoğlu said on March 2 that Turkey will strike the YPG if the latter does not withdraw from Manbij, while President Erdoğan said on the same day that Manbij is Turkey's first next target in Syria now that al-Bab has been freed from Daesh terrorists.