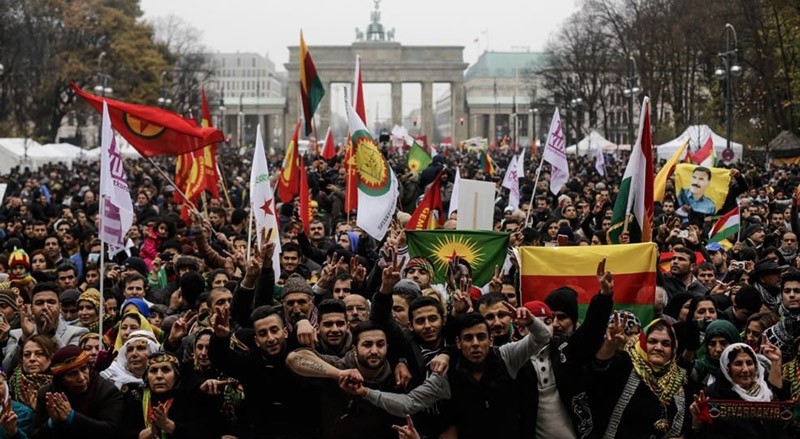 German Interior Minister Thomas De Maizière sent instructions to the federal states and police to ban symbols associated with the PKK and its Syrian affiliate People's Protection Units (YPG), including banners and placards depicting jailed terrorist leader Abdullah Öcalan who is the founder of the terrorist group, in public places, local media outlets reported on Friday.

The image of PKK leader Abdullah Öcalan, jailed in Turkey since 1999 after being caught in Kenya and tried by Turkish courts, is reportedly listed among the 33 symbols included in the prohibition order targeting the PKK and its subgroups active across Turkey, Syria, Iraq and Iran.

The German minister allegedly argued that the symbols in question cause ''a significant emotional impact'' and should therefore be forbidden as they are ''especially suited to promote PKK which is banned in Germany.''

It remains yet to be seen whether Germany authorities will actually enforce the prohibition order on terrorist symbols and propaganda or whether the order will just be another expression of good will.

Turkey has long accused Germany, a country with which it has a history of partnership and alliances dating back to the 19th century, of turning a blind eye on the activities of the PKK, which is officially classified as a terrorist organization by Turkey, the U.S., the EU, and Germany itself.

Supporters of the terrorist group have so far been able to hold pro-PKK rallies in addition to a whole lot of other activities which include raising funds, conducting large-scale propaganda in favor of the terrorist group, and brainwashing young people before sending them to terror camps in Syria and Iraq.

Germany also proved to back the PKK's Syrian branch YPG in Syria, with reports of sophisticated weapons such as the Milan anti-tank missiles being sent to the terrorist group.

The PKK, created in 1978, has been waging a decades-long armed struggle against the Turkish state.

The terrorist group has killed so far more Kurdish civilians than Turks in its terrorist attacks and murder campaign in a bid to spread its influence among the Kurdish population at all costs.

Resuming its bloody campaign against the Turkish state in July 2015, the PKK has killed over 800 security personnel and over 400 civilians since then.

In the meantime, the terrorist group has lost over 10,000 militants who have been either killed, or apprehended in counter-terror operations.

Since the outbreak of the Syrian civil war in 2011, the PKK expanded its terrorist activities across the northern part of that country via its offshoot YPG, benefiting from the vacuum of power resulting from the conflict.