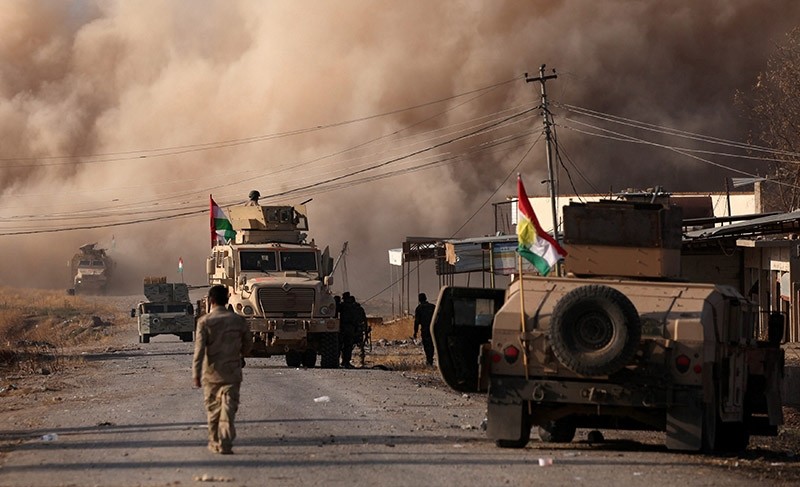 Smoke rises during clashes between Peshmerga forces and Daesh militants in the town of Bashiqa, east of Mosul, during an operation to attack Daesh militants in Mosul, Iraq, Nov. 7, 2016. (Reuters Photo)
by Ragıp Soylu Mar 15, 2017 12:00 am

The U.S.-led counter-Daesh coalition has no plans to work with the Syrian Kurdish militia, Rojava Peshmerga, in Syria, Daily Sabah learned on Tuesday.

The U.S.-led coalition has largely allied itself with the PYD and Syrian Democratic Forces (SDF), which exclude Iraq-based Rojava Peshmerga, a force of 5,000 fighters trained by KRG forces.

"We do not have any plans to use the Rojava Peshmerga as a partner force in Syria. They were not trained by Coalition forces," Col. John Dorrian, the spokesman of Operation Inherent Resolve, said in an email to Daily Sabah.

Two weeks ago, an ENKS delegation visited Washington, in aims of pointing to the PYD administration's oppression of other Kurdish political groups in northern Syria. One other objective was to ask the U.S. government to allow Rojava Peshmerga forces to join in the anti-Daesh battle in Syria.

Additionally, there were reports in the Turkish and international media suggesting that the U.S. may also prefer to utilize the Rojava Peshmerga forces in the upcoming Raqqa operation to alleviate Turkish concerns over the PYD. This statement also ruled out this option.

Several Washington sources suggested that the U.S. could not include a force competing with the PYD in the battleground, because it would simply undermine the coalition efforts in Raqqa.

The White House is yet to announce its decision on the composition of forces in the upcoming Raqqa operation. However, the recent deployment of U.S. marines accompanying advanced howitzers and aircraft near Raqqa, even though it is said to be a temporary mission, suggest that the Trump administration is likely to go along with the PYD-SDF option on the ground.

Local media said last weekend that over 40 trailer trucks brought humvees, armored vehicles and howitzers to northern Syria through the Iraqi border. An SDF source told Sputnik Turkish that some of the equipment in this coalition shipment are to be used by their fighters.

Denying this, Col. Dorrian said, "The trucks from Iraq resupplied Coalition forces, not the SDF." "All of the equipment we divest is to the Syrian Arab Coalition, which is a part of the Syrian Democratic Forces. We have delivered armored vehicles to the SAC, but not heavy weapons," he said.