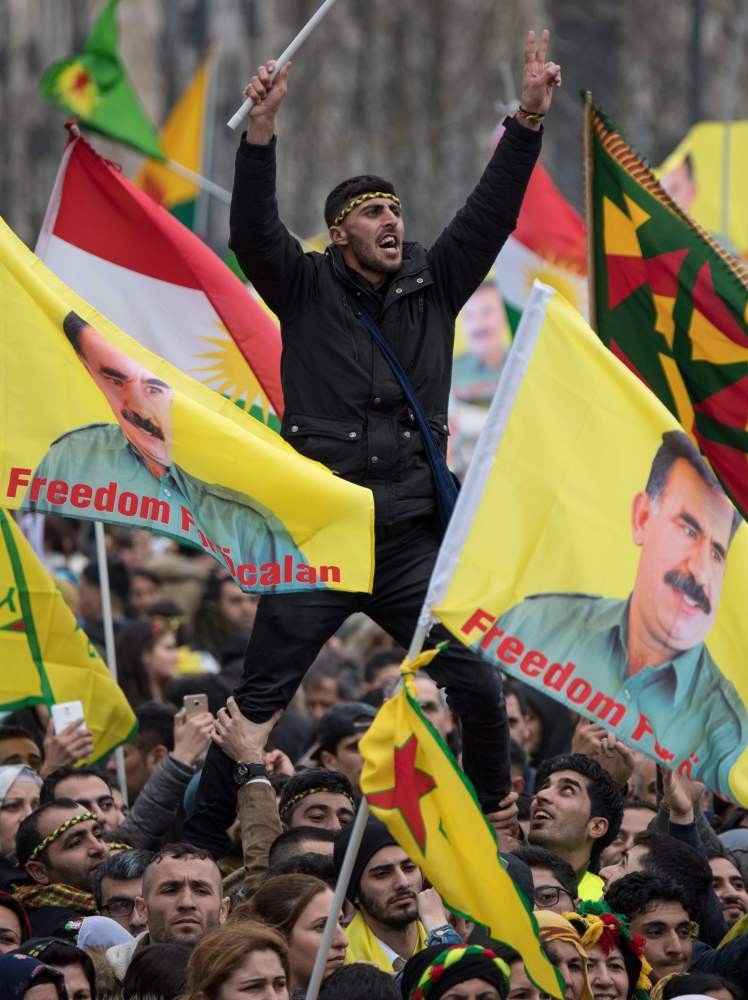 The PKK sympathizers are carrying images of the terrorist organization's jailed head Abdullah u00d6calan on Saturday, an image that already was banned by the German government.
by daily sabah
Mar 21, 2017 12:00 am

Regarding the flaunting of provocative images at a march set up by the outlawed PKK terrorist organization in Frankfurt, the city's police force made an announcement saying that they did not intervene in the demonstration in order to avoid escalation, before adding that legal action will be taken against demonstrators

Following Ankara's reaction over the PKK terrorist organization's rally in Germany, a Frankfurt police spokesman said that even though banned banners and flags were carried by protesters, they did not intervene during the demonstration "in order to avoid escalation." Speaking to the DPA news agency, the spokesman said that some protesters at the rally in Frankfurt will face legal action after reports that the image of the PKK's jailed leader Abdullah Öcalan was displayed at the demonstration.

He said investigative proceedings will "definitely" be carried out, adding against how many people the legal action will be taken. German officials allowed the PKK terrorist group followers to march in Frankfurt on Saturday, in stark contrast to the recent blocking of Turkish ministers and politicians from addressing Turkish voters in the country. Even though Germany recently introduced new measures to ban PKK symbols and the image of the terrorist organization's leader, Abdullah Öcalan, around 9,000 people marched in Frankfurt with PKK posters and flags, openly defying the federal government's prohibition of terrorist symbols in public places.

Regarding the Frankfurt police's controversial attitude, the spokesman justified their attitude by saying, "they had not intervened during the demonstration in order to avoid escalation."

Previously, a Frankfurt police statement said the group was permitted to carry out celebrations of Nevruz, a spring new year's festival, in two parts of the city on Saturday, adding that the main topics of the meetings were "Nevruz," "Freedom for Öcalan" and "Freedom for Kurdistan."

On Sunday, President Recep Tayyip Erdoğan slammed Germany for allowing the PKK march while banning the Turkish ministers' meetings, adding that it has "revealed the hypocritical and hostile attitude of the EU toward Turkey." He criticized the EU's preferential treatment shown to the "no" campaign compared to the "yes" campaign meetings, which were prohibited in Germany and the Netherlands, reiterating his accusations of "Nazism" in response to Germany's recent implementations against Turkey.

German-Turkish relations have been strained over the past few weeks, after a planned and previously announced meetings of Justice Minister Bekir Bozdağ and Economy Minister Nihat Zeybekçi with Turkish citizens in the German states of Baden-Württemberg and Cologne were canceled only a few hours before the event was due to take place for alleged security reasons.

Justice Minister Bekir Bozdağ on Sunday also criticized Germany over allowing the PKK to hold demonstrations in Frankfurt and said that any democratic country cannot give permission to a terror group. "Again, I am condemning this event. No person can justify it with democracy, freedom of speech or demonstration rights," he said.

Bozdağ added that Germany's government and officials "have unfortunately embraced a lot of terror groups including the PKK," and the terrorist organization obtains finances in the country through foundations and NGOs. He also said that the Turkish side notified German officials "many times" regarding the PKK's recruitment and dissemination of terror propaganda.

Meanwhile, it has been revealed that Germany's permission for the PKK contradicted the EU police agency Europol's report, which investigated the PKK's activity in EU countries under the title of "ethno-nationalist terrorism."

"The PKK increased its recruitment, propaganda, and financing activities following the breaking of the cease-fire with the Turkish government in 2015. Austria, Belgium, France, Germany, Greece, Romania, Sweden, Switzerland and the Netherlands informed [the agency] regarding the continuation of the financial activities of the terror group. The money is believed to be wired to the Syrian offshoot of the organization, the Democratic Union Party (PYD) and its armed wing the People's Protection Units (YPG) as well as its own armed wing the HPG," the report indicated.

Nearly 3 million Turkish immigrants live in Germany, and around half are eligible to vote in Turkey's April 16 referendum on the proposed constitutional change for a transition to a presidential system of governance, among other changes.

Since the use of the PKK flag was banned previously by German authorities, followers of the group often carry flags bearing the image of Öcalan in rallies organized across the country, although that image too has been recently banned.

The PKK, listed as a terrorist organization by Turkey, the U.S., and the EU, resumed its armed campaign against Turkey in July 2015 and has since been responsible for the deaths of approximately 1,200 security personnel and civilians, including women and children.