Turkey to conduct military operation against PKK base in Sinjar 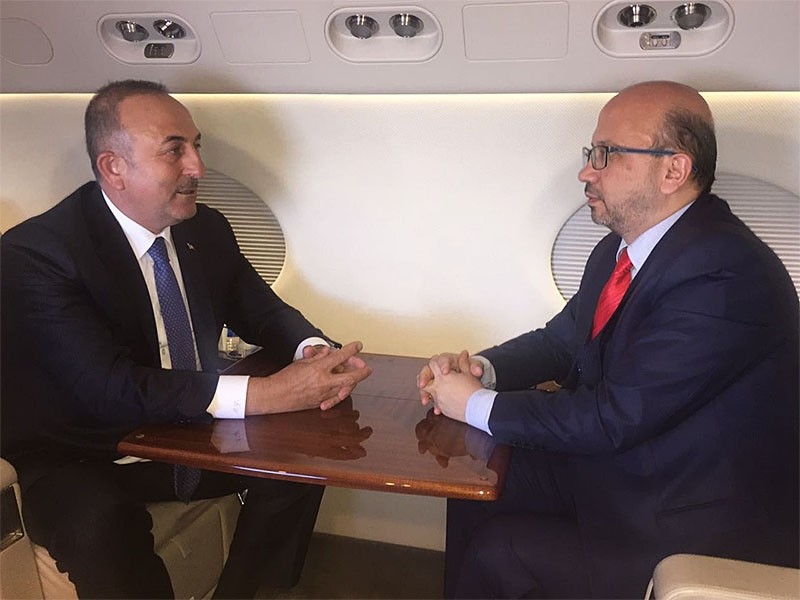 u00c7avuu015fou011flu (L) told Sabah dailyu2019s Ankara representative Okan Mu00fcderrisou011flu, u201cU.S. officials told us that they also have plans to retreat and eliminate the PKK from everywhere, including Sinjar.u201d
by Okan Müderrisoğlu Apr 01, 2017 12:00 am

Foreign Minister Mevlüt Çavuşoğlu said Turkey is determined to prevent PKK terrorists from securing a base in northern Iraq's Sinjar region and indicated that Turkey plans to conduct a military operation against the PKK base in Sinjar.

"We [Turkey] will use military options against the PKK in Sinjar. I'm not saying that we will only use military force if necessary, I'm saying that we will use military force without question," Çavuşoğlu told Daily Sabah on his way to Brussels for the NATO. Foreign Ministers meeting on March 30. Underlining that from Turkey's perspective there is no difference between Sinjar and the Qandil Mountains where the PKK terrorists have bases in Iraq, Çavuşoğlu also added that this issue was among the topics that was discussed during U.S Secretary of State Rex Tillerson's visit to Ankara on March 30. Tillerson indicated that the U.S. also supports Turkey's possible military operation against the PKK. "U.S. officials told us that they also have plans to retreat and eliminate the PKK everywhere, including in Sinjar. They [the U.S.] told us that they will move in cooperation with us on this matter," Çavuşoğlu added.

Commenting about Tillerson's visit to Ankara, Çavuşoğlu said Turkey and the U.S. are on the same page regarding the creation of terror-free safe zones in Syria. "Tillerson talked about establishing stability zones in Syria. This is exactly the same thing that was previously emphasized by President Recep Tayyip Erdoğan: establishing terror-free zones, providing the necessary conditions for Syrian people to go back their homes and ensuring their security with local forces. We are trying to do the same thing and told them let's do it together and encourage Europe to support us," Çavuşoğlu said.

Regarding Turkey's concern about the PKK terrorist organization's Syrian offshoot, the People's Protect Units (YPG), Çavuşoğlu said this issue was discussed in his meeting with Tillerson and was also brought to the agenda by President Erdoğan when he received the U.S. Secretary of State. "President Erdoğan explained the YPG-related issues to Tillerson in detail and clearly expressed that it would have a negative effect on the countries' relations if the U.S. decides to continue with the YPG. This is also against our alliance," he added.

"The U.S. commanders who try to justify their cooperation with the YPG are all well aware that there is no difference between the PKK and the YPG. When asked why there was a cooperation, they claimed that they had no other options. Otherwise, the U.S. would have to send more military forces, they said. In response, I suggested cooperation with Turkey and the opposition forces instead," he said.

Regarding the Raqqa operation, Çavuşoğlu said the U.S. has not decided whether to continue with the YPG. "The U.S. cooperation with the YPG is not off the table, yet. I got the impression that the U.S. has concerns that the YPG might be taken under Russian control if they cut their cooperative ties. In response I told them that it is ridiculous for two big countries to use a terrorist organization," he said. Clarifying Turkey's position about the Raqqa operation, Çavuşoğlu said the U.S. wants to include Turkey in the operation, while he stressed that Turkey will never be on the same page as YPG terrorists.

Prime Minister Binalı Yıldırım recently announced that Turkey had successfully ended Operation Euphrates Shield after defeating Daesh in its strongholds and seizing more than 2,000 square kilometers (770 square miles) in northern Syria. Commenting on whether Turkish troops will withdraw from that territory, Minister Çavuşoğlu said the Turkish Military will continue its mission inside Syria with the purpose of protecting civilians, and will continue training and equipment Free Syrian Army (FSA) members.