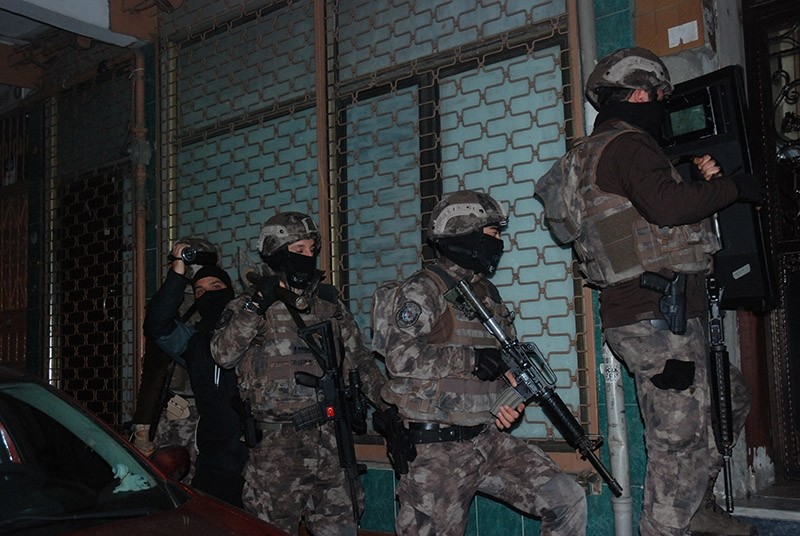 A total of five suspects, who were planning attacks, have been detained in anti-terror operations targeting Daesh in Istanbul.

Police units from the anti-terror branch carried out simultaneous raids to addresses located in Istanbul's Beyoğlu, Bahçelievler and Beykoz districts Thursday, during which suspects M.K.B, S.D, and N.Ç. were detained.

According to police sources, operations were launched upon receiving information about the suspects, who were planning a "sensational" attack to be carried out before the upcoming April 16 referendum.

Suspect E.N. and Tajikistani suspect F.A., who went to conflict zones and carried out activities in Istanbul on behalf of the Daesh terror organization, were also detained as part of the operations.

Necessary procedures regarding the suspects continue to be carried out at the Istanbul Police Department.

As part of Turkey's new anti-terror approach, Ankara has vowed to fight terror groups at their roots, before they are able to carry out attacks within Turkey's borders.

Constitutional changes have been discussed ever since Recep Tayyip Erdoğan was elected president in August 2014. The 18-article bill was passed by Parliament in January, with 339 votes in favor --nine more than needed to put the proposal to a referendum.

Turkey is set to vote Sunday on the new constitutional reform package. The reforms would hand wide-ranging executive powers to the president while abolishing the post of the prime minister. The president would also be allowed to retain his ties to a political party.

Other changes would reduce the minimum age for parliamentary candidates to 18 while increasing the number of parliamentary deputies to 600. Under the proposed new constitution, simultaneous parliamentary and presidential elections would be held in November 2019 and the president-elect would serve for a five-year term.