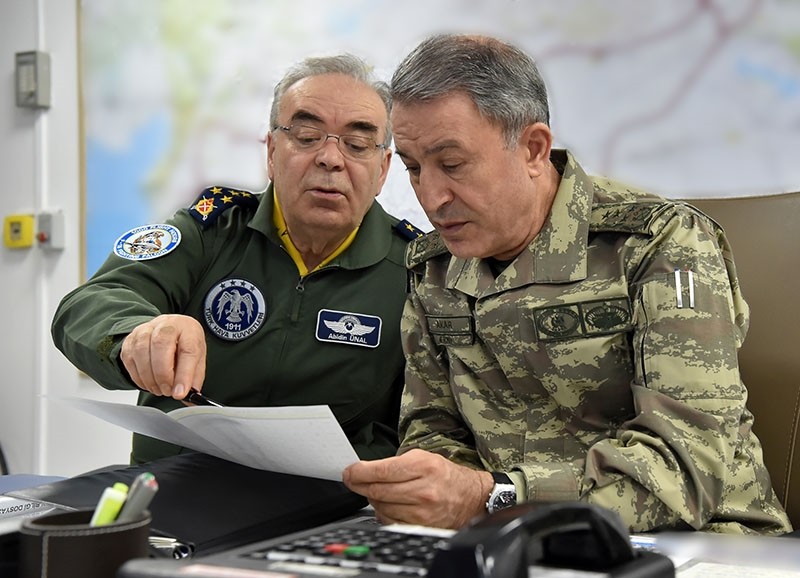 The Turkish Armed Forces (TSK) has carried out airstrikes against PKK terrorists near northern Iraq's Sinjar Mountain and areas in Karaçok Mountain in northeastern Syria, according to a statement released by the Turkish General Staff on Tuesday.

The anti-terror operations were launched at around 2 a.m. local time on previously identified targets in the region, aiming to prevent PKK terrorists from smuggling weapons and explosives into Turkey for future attacks, the military statement elaborated.

The targeted regions have become "terror hubs" for the PKK, which were used as an ammunition and terrorist source for PKK attacks within Turkey, the statement added.

The air operation was conducted "within the scope of the international law" and "with the aim of destroying the hot beds of terrorism which target the unity, integrity, and safety of our country and nation," the statement said.

The TSK also released the footages of the airstrikes. In the first footage, an ammunition depot and a communications center are seen exploding after an airstrike in Karachok in Syria. The second footage shows a large transmitter antenna and surrounding compound located in Iraq's Sinjar region destroyed in an airstrike. The last footage shows a shelter and training ground in Sinjar being destroyed.

Meanwhile, Iraq's autonomous Kurdistan Regional Government (KRG) said that six of its security forces were killed in overnight strikes, however, blaming the PKK and its affiliates for causing the strikes in the first place.

The peshmerga, the region's armed forces, said in a statement the strikes are "unacceptable," however that the apparent accident should be blamed on the PKK terrorist group, whose affiliates were the target of the strikes.

The strikes in the Sinjar area of northern Iraq were against positions held by the Yazidi Protection Units (YBS), a militia supported by the PKK, which Ankara considers a terrorist group.