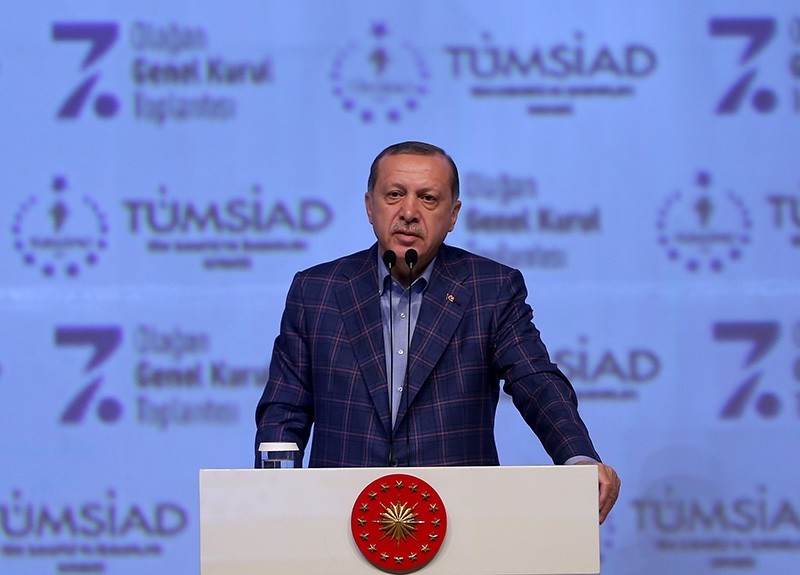 President Recep Tayyip Erdoğan warned Saturday once again that Turkey will not tolerate the presence of the PKK terror organization and their affiliated groups in northern Iraq's Sinjar region and northern Syria.

"Turkey knows what to do and when to do it, we may come there overnight all of a sudden," Erdoğan said, hinting at a cross-border operation to drive the terrorist group from the areas in its south.

Turkish warplanes on Tuesday pounded positions of the PKK and its Syrian-affiliate Democratic Union Party's (PYD) armed wing People Protection Units (YPG) on Sinjar Mountain in Iraq and Karachok Mountain in Syria for the first time. Following the airstrikes, Turkish military outposts on the border with Syria in southern Hatay, Şanlıurfa and Mardin provinces were targeted in a series of mortar and missile strikes conducted from PYD-held areas in northern Syria. No casualties were reported on the Turkish side, whereas Turkish artillery and tank units stationed in the area retaliated in kind, inflicting heavy casualties on YPG militants.

Both Sinjar and Karachok are located some 90 kilometers south of the border with Turkey.

In his speech, Erdoğan once again noted that an effective fight against Daesh terrorists cannot be carried out using another terrorist group, urging the U.S. and its partners in the anti-Daesh coalition to reconsider their support to the YPG-dominated Syrian Democratic Forces (SDF).

Erdoğan said if the U.S. halts cooperation with terror groups in Syria and joins forces with Turkey, the coalition forces can turn Daesh's de-facto capital of Raqqa into a "graveyard" for the terrorists.

The president said that he will talk about this issue with his U.S. counterpart Donald Trump during their meeting on May 16.

He warned that allowing other terror groups to gain ground in Iraq would only bring more casualties in the neighboring country.