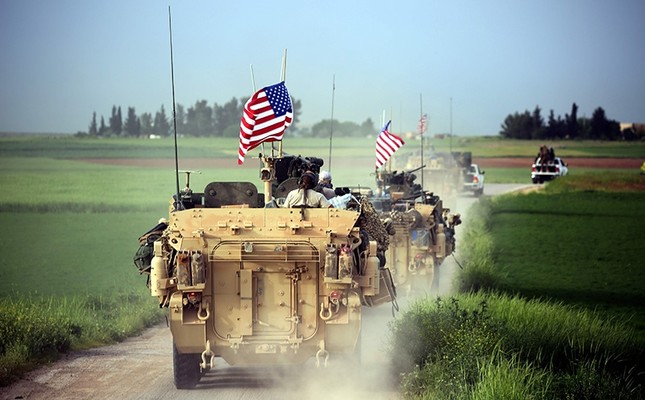 US forces, accompanied by YPG militants, drive their armored vehicles near the northern Syrian village of Darbasiyah, on the border with Turkey on April 28, 2017. (AFP Photo)

The U.S.-led coalition forces that support YPG-dominated Syrian Democratic Forces (SDF) are conducting joint patrols with the group along the northeastern Syria-Turkey border to assess reports from both the SDF and Turkey regarding cross-border fires between two parties, the coalition told Daily Sabah on Saturday.

The photographs circulated by the PKK-affiliated Peoples' Protection Units (YPG) social media accounts indicate that multiple American armored vehicles were deployed near the Turkish border, specifically around Tal Abyad and Qamishli where intense clashes between YPG forces and the Turkish military were still ongoing Friday. The Turkish military said that it had killed 11 YPG militants after receiving RPG fire from YPG-held territories in Syria. There were no Turkish casualties.

Turkish warplanes pounded Tuesday positions of the PKK and its Syrian-affiliate Democratic Union Party's (PYD) armed wing YPG on Sinjar Mountain in Iraq and Karachok Mountain in Syria for the first time. Following the airstrikes, Turkish military outposts on the border with Syria in southern Hatay, Şanlıurfa and Mardin provinces were targeted in a series of mortar and missile strikes conducted from PYD-held areas in northern Syria. No casualties were reported on the Turkish side, whereas Turkish artillery and tank units stationed in the area retaliated in kind, inflicting heavy casualties on YPG militants.

"The patrols' purpose is to discourage escalation and violence between two of our most trusted partners in the fight to defeat [Daesh] and reinforce the Coalition's commitment to both Turkey and the SDF", the coalition said via an email.

Pentagon Friday told reporters in Washington that U.S. Special Forces were working with the SDF in northern Syria, including the border areas between Turkey and Syria.

"We have U.S. forces that are there throughout the entirety of northern Syria that operate with our Syrian Democratic Forces partners," Pentagon Spokesman Navy Captain Davis said, "the border is among the areas where they operate."

"We continue to urge all the parties involved to focus on the common enemy which is [Daesh]. That's everybody, including the SDF. Right now we want them to focus on Tabqa and Raqqa, and not be drawn in conflict elsewhere," he said.

Coalition decision to deploy forces along the border is not a novel idea. The Pentagon deployed a number of forces in Manbij last March in a "deterrence and reassurance mission" to prevent Turkish-backed Free Syrian Army (FSA) forces from taking over the territory from YPG-led SDF.

The Pentagon said that the clashes between Turkish and YPG forces didn't stall the ongoing operation near Tabqa and Raqqa. Responding to the question of whether the YPG had diverted its forces back to the Syrian border and stopped operating near Raqqa, Captain Davis said that the SDF was continuing its military operations as usual.