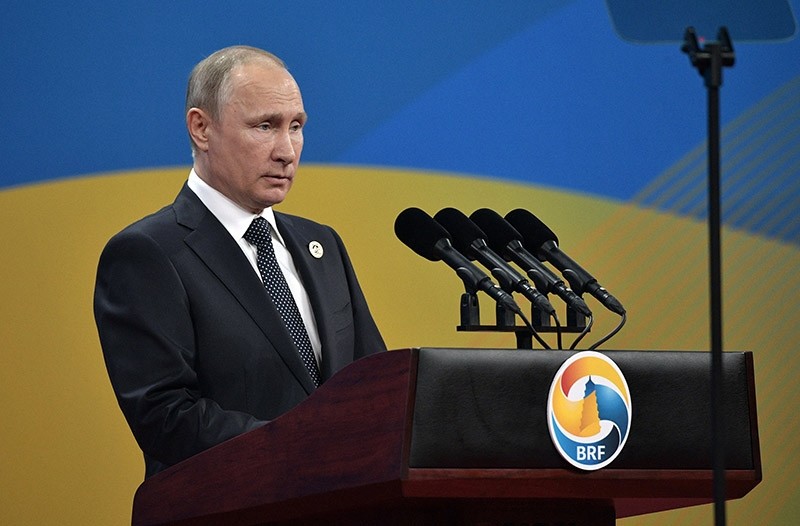 Russian President Vladimir Putin delivers a speech during the opening ceremony of the Belt and Road Forum (BRF) at the China National Convention Center (CNCC) in Beijing, China (EPA Photo)
by Daily Sabah May 15, 2017 12:00 am

Russian President Vladimir Putin said on Monday that unlike the United States, his country does not supply weapons to the People's Protection Units (YPG) in Syria.

Speaking at the Belt and Road Investment Forum in Beijing, Putin said that Ankara, which considers the YPG as an offshoot of the PKK terrorist organization, should not be concerned as Russia will maintain working contacts with them and does not provide arms.

"Unlike other countries we are not announcing any arms deliveries to Kurdish formations" he said, in reference to the YPG. "We are not declaring that we will send weapons to the Kurdish organizations like some of the other countries. They do not need our weapons anyway. They have their own sources to be provided with weapons."

Turkey considers the YPG to be the Syrian affiliates of the PKK, a proscribed terrorist organization in the U.S., Turkey and the EU.

Putin also noted that he discussed the issue with President Recep Tayyip Erdoğan.

He stated that in the upcoming Ankara meeting they will discuss the security zones that will be established in Syria.

"Now, we need a military-level meeting. The Ankara meeting will be all about that. As the Russian, Iranian and Turkish representatives, we will be in touch with the Syrian regime. First, we will draw the lines of the security zones and then, deal with the monitoring procedure," he added.

U.S. support for the SDF has been a major strain on relations between Washington and Ankara. The U.S. says that supporting the SDF is the only option for defeating the Daesh terrorist group, while Turkey says that an alternative should be formed through local Arab tribes backed by countries in the region instead of supporting the YPG terrorist group.