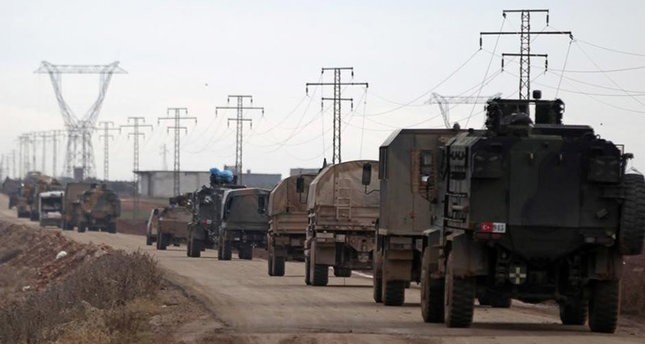 In this file photo, a column of Turkish military vehicles are seen advancing towards the town of Al-Bab in northern Syria. (AA Photo)
by Daily Sabah May 15, 2017 12:00 am

Deputy Prime Minister Veysi Kaynak said that Turkey is considering a gendarmerie base and a separate military base near the recently liberated Al-Bab town in northern Syria.

In an interview published in Turkish daily Hürriyet on Saturday, Kaynak said "We already have one base in the Kobani area. Our General Staff plans to create two bases in the area of strategic height Aqeel to the west of Al-Bab, where the fiercest battles with Daesh terrorists took place. One of these bases will be a gendarmerie base and another will be a separate military base in the region, in order to train and equip the locals, to help them form their own police and gendarmerie forces."

The Turkish military has succeeded in removing Daesh terrorists from the northern Syrian town of Al-Bab after a months-long operation in the area.

The Turkish Armed Forces (TSK) said on February 17 that the Turkish military, in cooperation with the Free Syrian Army (FSA), had taken control of the town.

The Turkish army has killed 166 Daesh terrorists from Feb. 9-15 and destroyed 236 targets, the TSK said in a statement. It added that Daesh's resistance has been crippled to a great extent.