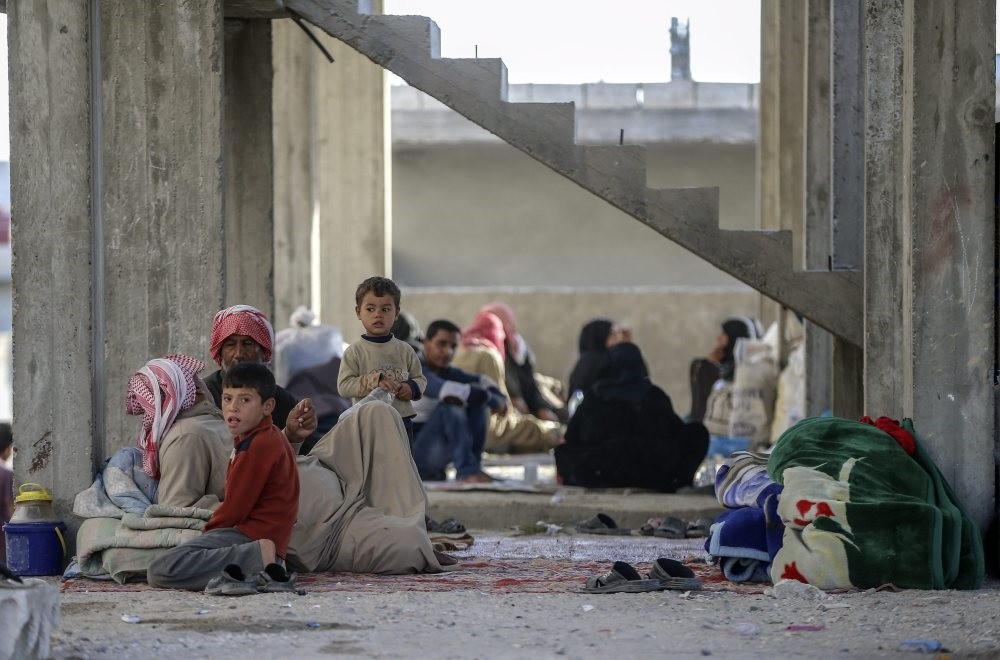 Syrian citizens that fled last year from PYD-controlled Manbij to Jarablus, which is controlled by the Free Syrian Army.
by Mustafa Kırıkçıoğlu
May 30, 2017 12:00 am

A supreme council consisting of Arab tribes from different regions of Syria has decided to start a fight against the PYD, accusing the terrorist group of destroying Arabic heritage and forcing local populations to migrate in order to shift demographics in northern Syria

Arab tribe leaders from northern Syria, whose lands were invaded by the PKK's Syrian offshoot the Democratic Union Party (PYD), said that they will launch military resistance against the PYD to take back their occupied lands and to end oppression against the Arab population in northern Syria. The deputy head of the Syrian Tribes and Clans Supreme Council, Sheikh Rafi er-Raco Ukla, spoke yesterday to Anadolu Agency (AA) saying that the PKK and its extensions have been trying to destroy Arabic identity on Syrian soil. In March, 50 Arab tribe leaders coming from Syria's Raqqa and the al-Hasakah and Deir Ezzor regions gathered in Turkey's southeastern province of Şanlıurfa to discuss military and political cooperation between the tribes. After the meeting, the tribes agreed to form the "Army of Al-Jazeera and Euphrates Tribes" to put an end to the invasion of their lands by Daesh and the PYD. "We are representing all Arab tribes of the country [Syria]," said er-Raco, adding that an extensive congress that also includes Iraqi tribes is planned to be held in Ankara.

Can Acun, a researcher in Middle Eastern politics at the SETA Foundation for Political, Social and Economic Research told Daily Sabah that even though the Arab tribes are not likely to get quick results militarily against the PYD, supported as it is by the U.S., their initiative corresponds with the people in region, and this situation favors them in terms of long-term politics.

"I believe that democracy and demographics will prevail in the long-term, especially if we talking about the post-Daesh era," he said.The sheik also called on the international community to cease their support of the PYD and its armed wing the People's Protection Units (YPG) due to human right abuses committed against Arabs in northern Syria.

"The PYD and the PKK are terror organizations just like Daesh. They razed the homes of the Arab population in Ras al-Ain, Suluq and Tel-Abyad," he said.

El-Raco also emphasized the fact that Kurds are not the majority among city populaces such as al-Hasakah, which was invaded by the PYD. "In al-Hasakah, 65 percent of the population is Arabic. Likewise, in Raqqa, Kurds only represent 5 percent of the population. If the PYD tries to establish control over Raqqa after take it back from Daesh, we will take action. They are trying to destroy our civilization, history and culture," he said.

Speaking to Daily Sabah on the issue, Mesut Özcan, associate professor and the head of the Ministry of Foreign Affairs' Diplomacy Academy, said that the PYD's presence in cities like Raqqa and al-Hasakah is not realistic in the long term due to the demographic situation.

"The U.S. uses the PYD and its armed wing the YPG for the Raqqa offensive in order to reach a quick solution. However, cooperation with Arab tribes in the fight against Daesh would be a more realistic and sensible choice. The PYD has been controlling a large area inside Syria but it is not likely to be the last for the post-Daesh period," he said.

The sheik also said that those Arab groups fighting in the ranks of the PYD "pursue their own interests" and "only represent themselves, not Arab society."

The PYD terrorist organization's forced migration of Arabs and Turkmens, as well as arbitrary arrests targeting critical voices and the recruitment of child soldiers, have been covered by international human rights groups, including Human Rights Watch (HRW), Amnesty International and Kurdish Watch.

The PYD's acts of oppression are not confined to Arab and Turkmen populations but also target rival political voices with retaliation being taken in the form of arson, arrests and kidnappings and has been voiced as concern by Kurds in northern Syria. The Kurdish National Council (KNC) in Syria has been a critical voice against arrests and abductions carried out by the PYD.

The PYD continues carrying out these acts amid aims of changing the demographics in northern Syria by forcing Arab and Turkmen populations to migrate, while also oppressing Kurds who do not share the same political ideology.