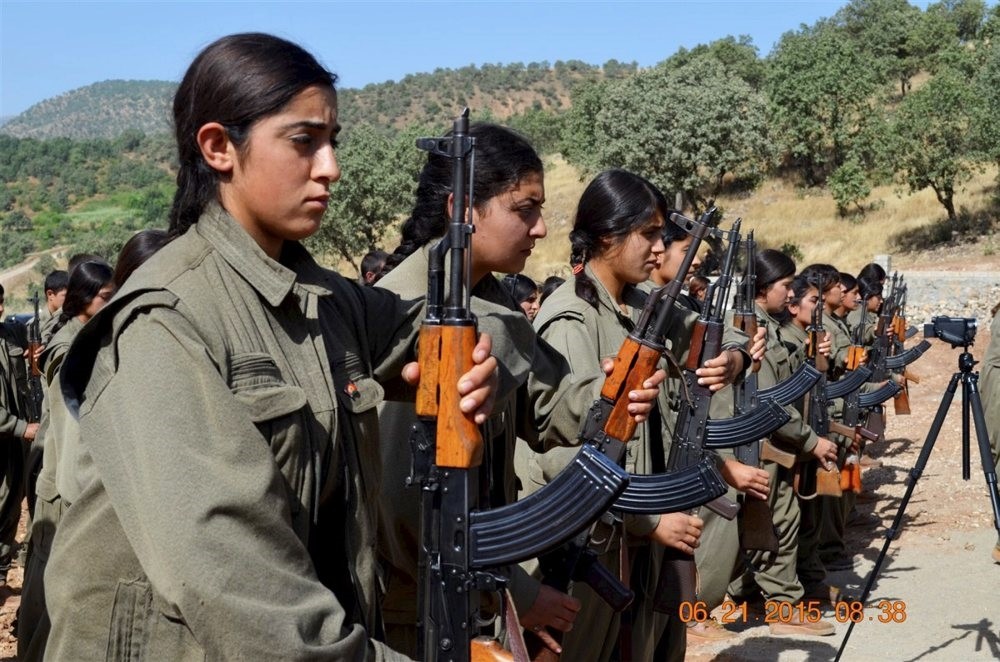 The report published on Friday indicates that 70 percent of PKK recruits have come from Syria.
by Daily Sabah Jun 17, 2017 12:00 am

An Interior Ministry report revealed that the PKK steered into northern Syria to recruit militants after the number of people joining the terror group's ranks from Turkey drastically decreased. While the new average age of recruits stands at 12, the report also suggests that Syrian Yazidis, who suffered from Daesh terror, are being exploited by the PKK

A recent report by the Interior Ministry revealed that the majority of recruits made abroad for the PKK have been predominantly from Syria, where the terrorist organization's armed Syrian wing the People's Protection Units (YPG) is fighting for regional influence, and the average age of recruits stands at 12 years of age. The report published on Friday indicates that 70 percent of PKK recruits have come from Syria. The terrorist organization remains active in Syria through its affiliations with the YPG.

The Turkish Interior Ministry's report indicates that the average age of Syrian recruits is 12 years. The PKK and the YPG have a history of exploiting children and forcing them to become soldiers. Earlier in 2017, the YPG mandated conscription for all girls and boys over the age of 16 in the city of Manbij, located on the west banks of the Euphrates River. The Yazidis, a regional minority group, have also suffered from oppressive acts at the hands of the PKK and the Democratic Union Party (PYD). The terrorist groups allegedly drove Yezidi children onto the battlefront, either by deceiving them or kidnapping them in Iraq and Syria, Sinjar District Governor Mehma Halili from the Kurdistan Democratic Party (KDP) stated last year.

On Sept. 1, 2016, a video of a little girl reportedly being told to shoot an automatic rifle in a PYD-controlled area in northern Syria went viral on the internet in a video that has been described by Twitter users as further proof of child abuse by the terrorist group.

Regarding the involvement of children in armed conflict, the U.N. Convention on Children's Rights states that "Armed groups that are distinct from the armed forces of a state should not, under any circumstances, recruit or exploit in hostilities any persons under the age of 18 years."

According to the report, nearly half of all child soldiers are killed within two years of recruitment. Also, in August 2015 a report on the PYD was published by KurdWatch, an independent group of experts reporting on Kurdish rights' violations in Syria that revealed information about the PYD's forcible recruitment and deployment of child soldiers.

The report titled, "The Forcible Recruitment and Deployment of Child Soldiers by the Democratic Union Party in Syria," states that in addition to adults being forcibly conscripted by the PYD to serve for its armed wing the YPG, there has also been an increase in the recruitment of children as young as 12 years of age over the past 14 months.

Successful operations launched by the Turkish Armed Forces (TSK) over the past two years have thwarted the PKK's efforts and the number of child recruits in the PKK has dropped; namely, only 48 people joined the ranks of the PKK in the first five months of 2017. While 3,698 people were recruited by the PKK in the summer of 2015 when the terrorist group unilaterally broke a cease-fire with the Turkish state, that number stood at 621 in the summer of 2016.

Over the course of the last five years, 12,321 people have joined the PKK. Of the 12,321 terrorist recruits, 5,099 of them were under the age of 18 and 75 percent of all recruits were male, compared to 25 percent female.Huge amount of PKK ammunition seized in past week, military says

Also, at least 60 PKK terrorists have been killed in anti-terror operations.

According to a statement by the military, the terrorists were killed in the southeastern Şırnak, Hakkari, Diyarbakır, Bingöl, Elazığ, Mardin and Siirt provinces.

Fifty-two hideouts, shelters and caves used by the terrorists have also been destroyed in the operations, the military added.

Meanwhile, 5,617 people trying to unlawfully cross the border have been detained by Turkish border security agents to prevent the flow of terrorist fighters.

The air force has been conducting regular airstrikes on PKK facilities in both northern Iraq and Turkey since July 2015.

Since then, more than 1,200 people, including security force personnel and civilians, have lost their lives, while the terrorist group has lost some 10,000 militants, who were either killed or apprehended in anti-terror operations by Turkish security forces.