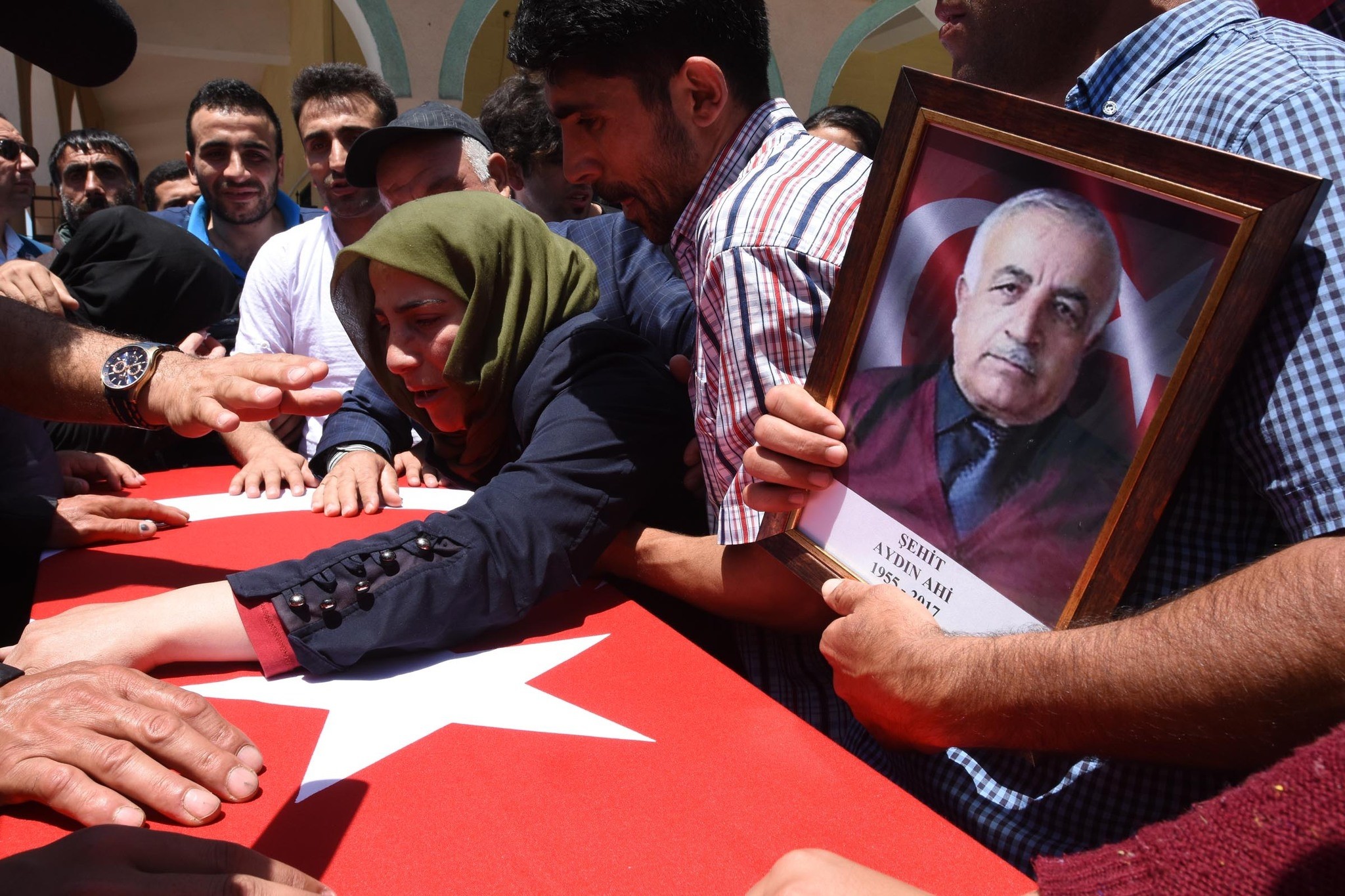 A relative of assassinated district governor Aydu0131n Ahi mourning during his funeral.
by Daily Sabah Jul 03, 2017 12:00 am

The PKK's armed campaign has reached new levels of brutality as the terrorist organization continues to suppress the voices of the opposition Kurdish movements in southeastern Turkey. It has killed two district-level politicians from the ruling AK Party in two days and targeted civil servants, killing two teachers in the last month alone

The PKK terrorist organization has resumed assassination plots targeting Kurdish political figures who refuse to adhere to its brutal policies, killing two members of the Justice and Development Party (AK Party) in two days in southeastern Turkey. Two AK Party district deputy heads have been killed in Turkey's southeastern province of Diyarbakır and the eastern province of Van in two separate incidents. AK Party deputy district head Orhan Mercan was shot in an armed attack in front of his home by armed PKK terrorists in Diyarbakır's Lice district. The AK Party's district head İsmail Demir, said Mercan was immediately taken to Lice Hospital for treatment but succumbed to his injuries.

His body will be transferred to Diyarbakır for an autopsy, according to reports. "Initial findings point to PKK militants as being the perpetrators of the attack," Demir noted. In a separate incident, PKK terrorists abducted Aydın Ahi, AK Party deputy head of the Özalp district in eastern Van province, from his home. More than 10 bullets reportedly struck Ahi before he died. Police have launched an investigation to capture the perpetrators. The PKK terrorist organization has intensified assassinations targeting politicians since its attempts to target urban areas were thwarted last year as a result of successful counterterror operations and the lack of cooperation from locals in the region.

Mercan and Ahi are not the first politicians to fall victim to the PKK, as two other district-level politicians were also consecutively killed last year.

Deryan Aktert, the head of the AK Party's Dicle district headquarters in southeastern Diyarbakır province, was shot dead by PKK terrorists at his workplace in October 2016.

A day before Aktert's assassination, Aydın Muştu was found dead in his home after being ambushed by PKK terrorists in Van's Özalp district, where he served as deputy head of the AK Party's district branch.

In the wake of the killings, the leader of the PKK, Murat Karayılan, claimed responsibility and threatened other administrators and politicians in the region with death.

Along with politicians, civil servants are also frequently targeted by the PKK in Turkey's southeastern region.

Necmettin Yılmaz, a 23-year-old teacher in Turkey's southeastern Şanlıurfa province, was killed by the PKK in Turkey's eastern Tunceli province, according to a statement from the terrorist organization Wednesday.

On June 9, PKK terrorists killed another young teacher, Aybüke Yalçın, in a terrorist attack as she was traveling in a car with her colleagues in the southeastern province of Batman.

Also, Muhammet Fatih Safitürk a district governor who was appointed to the Derik district in Mardin province was killed by a bomb that had been planted in his office in November 2016.

The PKK's Syrian offshoot, the Democratic Union Party (PYD), which is backed by the U.S. under the guise of fighting Daesh, applies the same strategy in northern Syria, brutally suppressing all critical voices and Kurdish movements apart from itself.

The terror organization targets rival political voices, taking retaliatory action in the form of arson, arbitrary arrests and kidnappings, to the ire of Kurds in northern Syria who have voiced concerns.

The Kurdish National Council (KNC) in Syria has been a critical voice against the arrests and abductions carried out by the PYD.

The PKK, listed as a terrorist organization by Turkey, the U.S. and EU, resumed its decades-long armed campaign against the Turkish state that has been ongoing since 1984. An estimated 40,000 people in Turkey have died in terror-related violence since then, including 150 school teachers.

Southeastern and eastern Turkey are particularly prone to PKK attacks and along with military and police officers, a large number of civil servants and civilians have been killed in armed ambushes, car bombings and roadside bomb attacks.