Turkey's role in post-Daesh Mosul will be crucial, experts argue 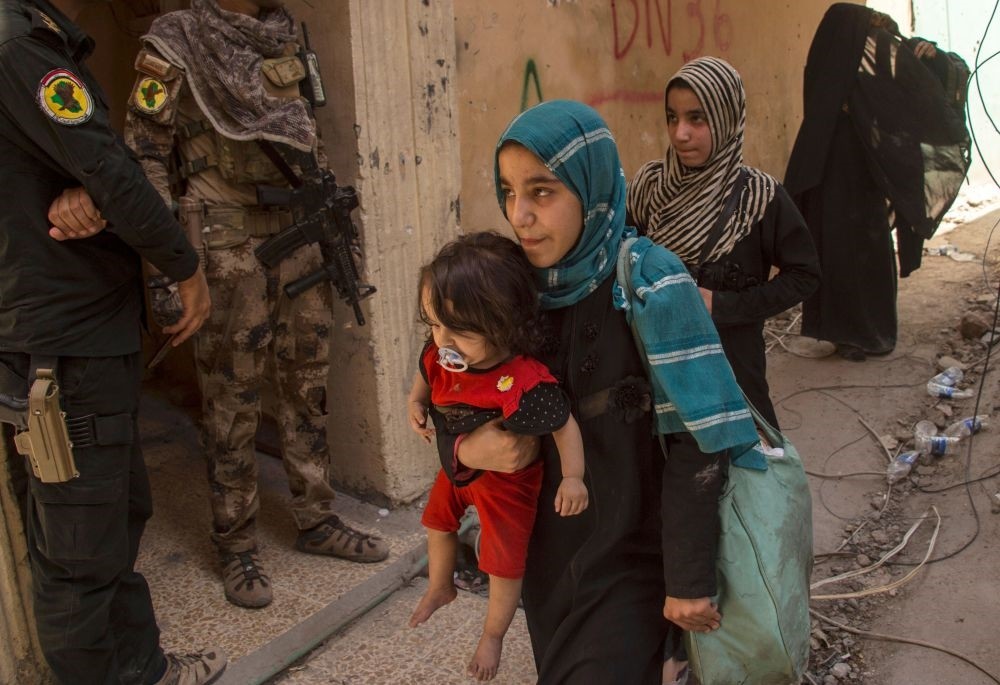 Civilians flee as members of Iraq's Counter-Terrorism Service (CTS) advance in the old city of Mosul yesterday, amid an' ongoing government offensive to retake the city from Daesh.
by Yunus Paksoy Jul 06, 2017 12:00 am

As Iraqi forces come closer to liberating Mosul from Daesh, experts argue that Turkey could be a significant actor in the city's rebuilding in cooperation with Iraqi authorities

Turkey's role in reconstructing Mosul after the city is fully liberated from Daesh will be very significant, and Ankara has already started lending a helping hand to the Iraqi government in this regard, experts stated at a panel held in Ankara yesterday.

At a panel hosted by the Ankara-based Political, Economic and Social Research Foundation (SETA), experts suggested that Turkey will play a key role in reconstructing post-Daesh Mosul as Iraqi forces are very close to cleansing the terrorist group from the city.

Ali Nasir, director of the Iraqi-based Al-Nahrain Center for Strategy Studies, said Iraq has been fighting terrorism for a while, and Baghdad and Ankara must find ways to cooperate on civilian and security issues. "A secure Iraq would also put Turkey in a comfortable position. Such meetings between Turkish and Iraqi authorities are important in enhancing cooperation," Nasir said.

Ali Onaner, the deputy director of the Turkish Foreign Ministry's Iraq Relations Department, said that after armed clashes are over, it would be wise to bear in mind what mistakes were made before Daesh captured Mosul in 2014. "The process for Mosul to achieve stability has started. Turkey is taking its place in this process," Onaner said, adding that Ankara will be with Baghdad to offer help for as long as the latter requests it.

Referencing mistakes made in the Mosul region, Onaner said that the PKK remains a threat to everyone in Iraq. Stressing that the PKK aims to bolster its influence in the region using the pretext of fighting Daesh, Onaner said this had been observed in the Sinjar region. "Unfortunately, the PKK has established its presence there. However, it is important that the Iraqi government gives positive messages on this issue. The Iraqi government said it will not let the PKK become a threat on its soil."

Duran asserted that there is a vast area between Turkey and Iraq where the two countries may be able to sort out their differences of opinion and find cooperative strategies to solve their own problems.

The Iraqi Ambassador to Ankara, Hisham Ali Akbar Ibrahim al-Alawi, who was present at the panel, commented on the Hashd al-Shaabi presence in the Mosul fight and how it would impact the future of the city if it were to remain there, as the group is accused of following sectarian policies.

Brushing off allegations that the Hashd al-Shaabi has committed war crimes and violated basic human rights against Sunni Arabs in Mosul, al-Alawi said the group arrived at such a time when Iraq's security was threatened and the Iraqi army was weak.

"The Hashd al-Shaabi is a serious institution. They arrived at such a time when Iraq's security, including all Iraqis, was under threat. Iraqi security forces were really weak. They arrived as a result of a religious fatwa," the Iraqi ambassador said, adding that the group's emergence was a special case.

Calling on everyone to disregard reports or news of Hashd al-Shaabi's alleged human rights violations that are not confirmed, al-Alawi said some people within the group "might have taken illegal actions" during the war. The Iraqi ambassador asserted that nobody is talking about how the Hashd al-Shaabi retook many places from Daesh without damaging infrastructure or harming civilians.

It was feared that if the Shiite groups such as Hashd al-Shaabi enter Mosul once it is liberated, extremist groups within the group, such as the Hashd al-Shaabi, would commit serious human rights violations in the city. Amnesty International published a report on Oct. 19, 2016, saying Shiite militias had committed "serious human rights violations, including war crimes" against civilians fleeing Daesh-held villages.

Also speaking at the panel, Ufuk Ulutaş of the Director of the Foreign Policy Department at SETA said that the Hashd al-Shaabi is an outsider actor that was formed upon a religious fatwa. "It is a problem in the entire world wherever it may be. How this problem will be resolved is related to the future and security of one's country," Ulutaş said.

Stressing that one may romanticize that the Hashd al-Shaabi arrived when Iraq was in need, Ulutaş said that the world has witnessed how armed actors independent from the state may cause problems in the future. "It is a challenge for the whole world rather than only Iraq," the expert said.