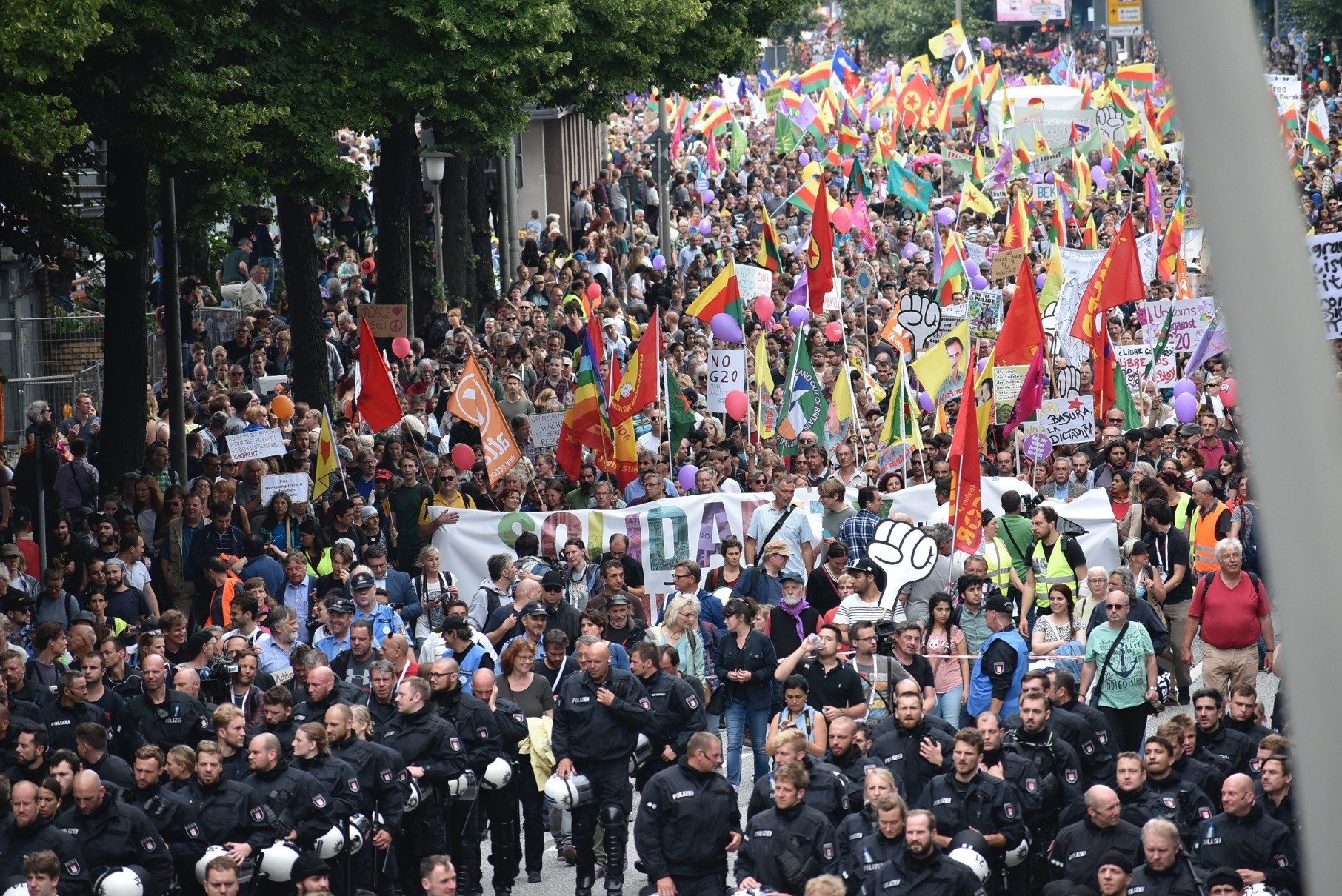 Supporters of the PKK terrorist group actively rallied in the Hamburg protests during the G20 summit with banned posters and flags, despite the German government's decision to prohibit such symbols.

Dozens of PKK followers carried flags of the PKK, its Syrian offshoot the Democratic Union Party (PYD), and of the terrorist organization's imprisoned leader Abdullah Öcalan.

Police did not intervene to stop these protestors, even though the government banned these flags and symbols in March.

The Turkish government has repeatedly urged German authorities to take measures against the PKK, which has been outlawed in Germany since 1993.

The PKK has more than 14,000 followers in Germany among the Kurdish migrant population, and the terrorist group raised more than 13 million euros ($14.3 million) in 2015, according to reports by the German domestic intelligence agency, the BfV.

"I think Turkey is right when it warns us and says we should not allow the PKK to carry out propaganda activities in public," Gabriel told reporters in a news conference at the Foreign Ministry.

"I also think that it is unacceptable to ban public appearances of Turkish politicians, but at the same time [we] allow posters of Mr. Öcalan," he said, referring to rallies held in Germany by PKK followers, during which they use flags of the PKK and PYD terrorist groups and its so-called chief, Abdullah Öcalan.

Berlin's reluctance in combating PKK activities in the country has been the source of major dispute with Ankara. Germany acknowledges that the PKK is a terror threat, however, Ankara argues that Berlin's acknowledgement does not go beyond political rhetoric and translate to concrete action.

"The PKK was banned in our country in the early 1990s, not only for what it did in Turkey, but also due to its involvement in extortion, drug trafficking, arms trade in our country; [and] due to the threat for citizens who came from Turkey to Germany," Gabriel said.

The terrorist group, listed as a terrorist organization by Turkey, the U.S. and EU, resumed its armed campaign against Turkey in July 2015 and since then has been responsible for the deaths of approximately 1,200 security personnel and civilians, including women and children.

Meanwhile, according to a recent report by the European Police Office (EUROPOL), titled "Terrorism Situation and Trend Report 2016," the PKK increased its fundraising, propaganda and recruitment across Europe after the termination of its cease-fire with Turkey in July 2015 and the subsequent escalation of the conflict.

"Austria, Belgium, France, Germany, Greece, Romania, Sweden, Switzerland and the Netherlands reported the continuity of the PKK's annual fundraising campaigns, which included collecting donations, membership fees and other revenues. The proceeds are believed to fund the group's armed wing, the People's Defense Forces (HPG), as well as the group's counterpart in Syria, the Democratic Union Party (PYD), and its armed wing, the People's Protection Units (YPG)," the report suggested.