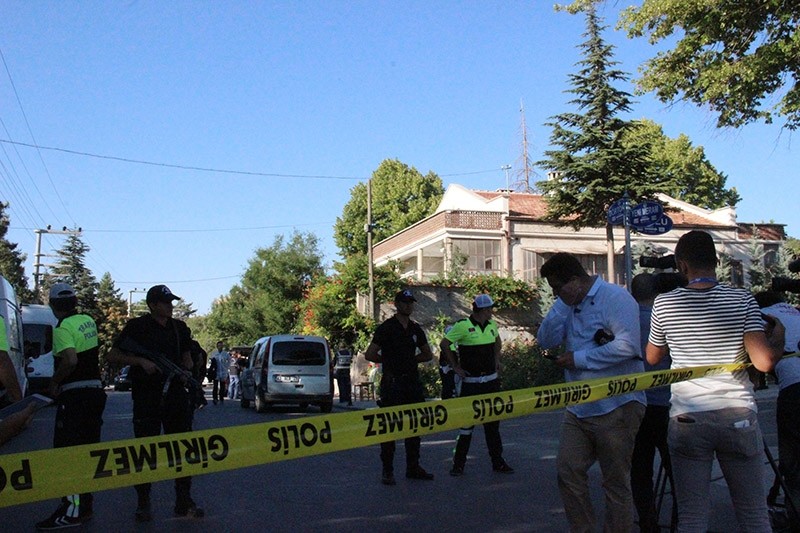 In the latest crackdown against the Daesh terrorist group, five militants engaging in a shootout with police were killed, while 233 people were captured in nationwide operations. The Turkish National Police announced that the operations were carried out in 29 provinces. Media outlets reported some suspects were plotting attacks at ceremonies to mark the upcoming anniversary to remember victims of last year's July 15 coup attempt.

Early Wednesday, anti-terror police raided a villa in the Meram district in the central province of Konya. Five suspects who opened fire on officers were shot dead, while eight others were detained. Police found three kilos of TNT explosives and a suicide vest in the house, which was located on a road leading to a military base and Turkish National Police's Special Operations headquarters in the province. Four police officers were slightly injured in the operation. Television images showed a police officer wearing a helmet in which a bullet had pierced the upper part of the helmet. The officer was not injured. The villa was one of 11 locations the police raided early Wednesday morning, resulting in the detention of eight suspects. Şenay Çelikten, who lives across from the house, told Anadolu Agency they woke up to gunshots around 05:00 a.m. She said she did not know the occupants of the house but knew they had moved in about 20 days ago. "They were coming and leaving the house with backpacks," she said. The Konya Governorate said in a written statement that the operation came after they took measures to secure the route of vehicles military and police staff from nearby bases, and it was found that the villa was rented by A.Y., a wanted terror suspect. It was not clear whether A.Y. was among the slain suspects. Doğan News Agency published the photo of a suspect whose lifeless body was lying in the villa's courtyard. The governorate's statement said police found five AK-47 rifles, a pistol and a large cache of munitions inside the villa and an investigation was underway to identify the 'neutralized' suspects.

In İzmir, the country's third largest city, which is in western Turkey, 21 suspects were captured in operations in the Torbalı, Menemen and Hatay districts. Anadolu Agency reported that the suspects were planning to carry out attacks during the anniversary of the July 15 coup attempt. Turkey on Saturday will mark the anniversary of the 2016 putsch bid that killed 249 people, and "democracy rallies" will be held across the country. Police found propaganda material, pistols and a shotgun in the raids. In Eskişehir, another western city, six Iraqi suspects linked to the terrorist group were captured. Another five Daesh suspects were captured in the eastern province of Van, which borders Iran.

In Mersin on the southern Mediterranean coast, 10 suspects, who were planning to strike July 15 commemoration ceremonies, were captured. Police found a pistol and munitions in suspects' possession.

In the southern city of Hatay bordering Syria, 18 Daesh suspects and a suspected militant trying to infiltrate the country from the border were captured in anti-terror operations.

Last Friday, 30 suspects were captured in nationwide operations against Daesh.

Daesh became one of the most active terrorist groups in Turkey over a span of just two years. It has been blamed for a string of attacks in Turkey, ranging from suicide bombings to gun attacks. In January, a lone Daesh gunman stormed a popular nightclub in Istanbul where he killed 39 people during New Year's Eve celebrations. The gunman was apprehended a few weeks later. Turkey is one of Daesh's many enemies. The group emerged in Iraq and Syria, both of which share a border with Turkey. Turkey is also tackling an influx of foreign fighters looking to sneak into Syria and Iraq where Daesh controls towns and large swathes of territory. Since the terrorist group's emergence, Turkey has detained over 5,000 suspects and launched Operation Euphrates Shield last year to back Syrian opposition groups fighting Daesh in Syria. The operation, which took place from August 2016 to April 2017, saw the liberation of the Syrian towns of Jarablus, al-Rai, Dabiq and al-Bab from Daesh control.

The country has deported over 5,000 Daesh suspects, President Recep Tayyip Erdoğan recently said. The president said that Turkey also prohibited the entry of over 53,000 terrorist suspects and destroyed Daesh terrorists along the border, allowing 100,000 Syrians to return to their homes. "With Operation Euphrates Shield, we killed over 3,000 Daesh terrorists [in northern Syria]," Erdoğan said.