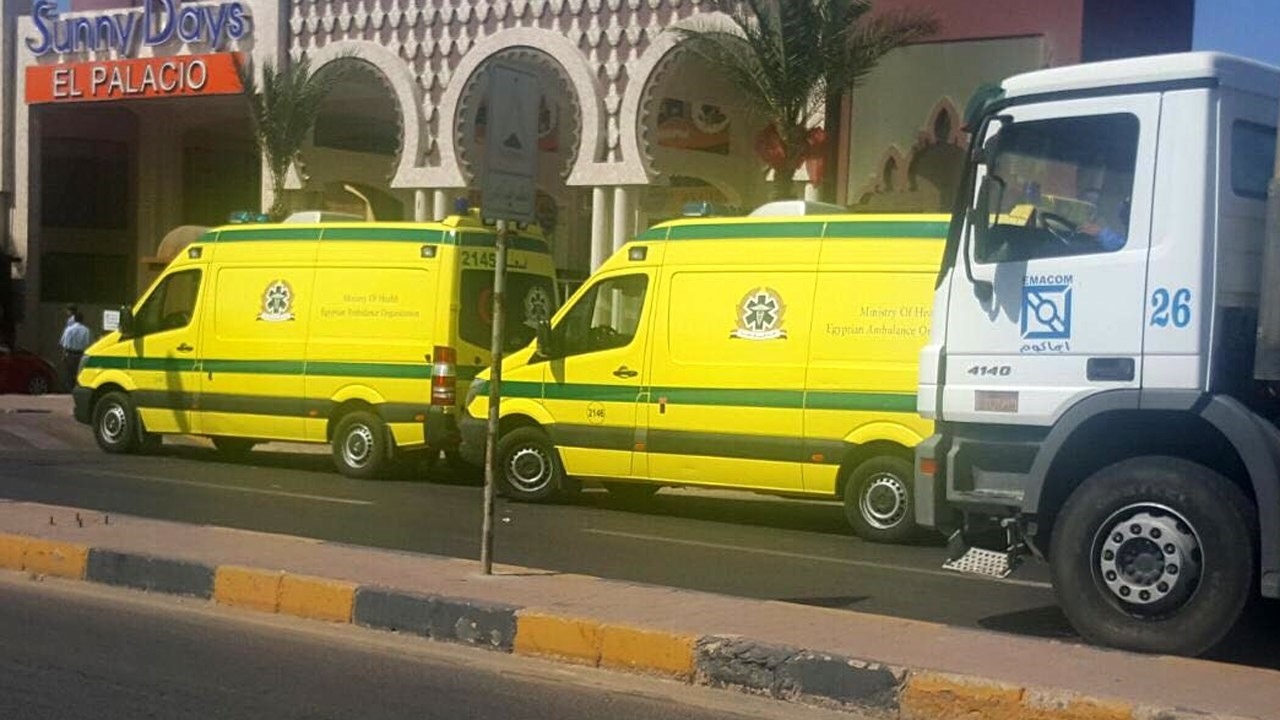 Two German tourists were stabbed to death while four other foreigners were wounded in an attack Friday at a hotel in the Egyptian Red Sea resort of Hurghada, an Egyptian security official said.

The assault came just hours after a drive-by shooting near some of Egypt's famed pyramids outside of Cairo killed five policemen. The motive behind the stabbing was unclear and the Interior Ministry said the attacker at the Red Sea resort was arrested immediately.

A security official said the attacker, a man in his 20s who had sneaked into the hotel by swimming from a nearby beach, wielded a knife and intentionally sought to attack foreigners.

No group has so far claimed responsibility for the killing of the policemen but that attack bore the hallmarks of a smaller militant group known as Hasm, which has been behind similar drive-by shootings.

Friday's attacks could impact an already struggling tourism industry — a pillar of Egypt's economy that employs millions of people. The industry has suffered from political instability and a fragile security situation since the 2011 Arab Spring uprising.

The year before the upheaval, nearly 15 million tourists visited Egypt. Last year, the figure was at 5.3 million, according to official reports. In 2015, a Daesh affiliate in Egypt downed a Russian plane over Sinai, killing all 224 passengers aboard.

The attacker in Hurghada, one of Egypt's most popular beach resorts and diving centers, stabbed the tourists in the face, neck and feet, according to the security official.

The tourists died of their wounds while three tourists from Serbia and one from Poland were wounded, the official told The Associated Press. Governor Ahmed Abdullah of the Red Sea governorate also confirmed the two deaths but gave no further details.

However, in Belgrade, Serbia's foreign ministry said no Serbian citizens were among the wounded in the Hurgada attack.

An emergency doctor at the al-Salam hospital in Hurghada declined to answer questions, only confirming that the wounded tourists were brought there. Both the security official and the doctor spoke on condition of anonymity because they weren't authorized to speak to the media.

The official described the attacker as a young man in his twenties, dressed in a black T-shirt and blue jeans, and said he shouted in Arabic during the attack, apparently meant for Egyptians: "Stay away, I don't want Egyptians."

Earlier on Friday, gunmen riding a motorcycle opened fire on a security vehicle patrolling a Giza village, next to some of Egypt's oldest pyramids outside the capital, Cairo, killing five police, the Interior Ministry and officials said.

The deadly shooting — on the Muslim weekend in Egypt, when traffic is slower — heightened fears of what has become near-weekly attacks by suspected militants after a blitz attack left 23 troops dead in northern Sinai a week ago.

Egypt has been under a months-long state of emergency following a series of deadly church bombings in the spring. Friday's attacks threaten a new blow to the country's struggling tourism industry and economy.

The village of Abusir in Badrashin, where the policemen were killed, is part of Greater Cairo. The policemen were part of the force tasked to guard the district of Saqqara, one of Egypt's most popular tourist sites and host to a collection of temples, tombs and funerary complexes.

According to the ministry, the militants sprayed the policemen's vehicle with machine-gun fire and fled the scene after one policeman returned gunfire.

Egyptian security officials had earlier said that the attackers were masked and that they had targeted a checkpoint. The assailants stole the policemen's weapons and radios and tried to set fire to the bodies but fled upon seeing people gathering nearby, witnesses said.

The witnesses also spoke on condition of anonymity, fearing for their own safety. The disparate accounts could not immediately be reconciled.

CBC Extra, a privately owned Egyptian TV network, said surveillance cameras at a gas station nearby showed the attackers disguised in police uniforms and that they stopped the police vehicle before opening fire. It wasn't immediately possible to confirm the network's account.

Authorities cordoned off the area and ambulances rushed to the site, located near the famous Step Pyramid of King Djoser. It is the oldest of Egypt's more than 90 pyramids and the forerunner of the more familiar straight-sided pyramids in Giza on the outskirts of Cairo.

The Hasm, or "Decisiveness," is a militant group that authorities have linked to the now-outlawed Muslim Brotherhood. It has claimed responsibility for drive-by shootings and attacks that targeted police, military, judges and pro-government figures in the past.

Last week, Daesh militants killed 23 army personnel in a remote checkpoint in northeastern Sinai Peninsula. The IS in Egypt claimed responsibility for that attack — the deadliest in the turbulent region in two years.

Egypt has been under a state of emergency since April, after suicide bombers struck two Coptic churches north of Cairo, killing scores of Christians.

Egypt has been rocked with deadly suicide bombings and drive-by shootings since the 2013 military ouster of an elected president. The violence has been concentrated in the northern Sinai Peninsula, but attacks have spread to the mainland, including in the capital, where suicide bombers have struck churches and security headquarters.

His brief rule proved divisive, and the military overthrew him in 2013. Authorities outlawed the Brotherhood a few months later, declaring it a terrorist group. An ensuing security crackdown on the group's ranks battered its leadership, who are either in prison or exile, and its youth became potential recruits for militant groups.