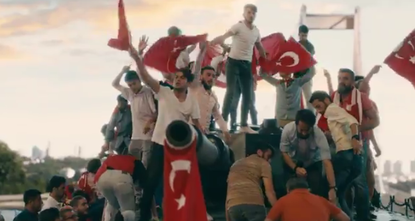 Turkey is commemorating the July 15 failed coup attempt one year after the deadly incident as the unique fight against coup plotters to protect Turkish democracy is being remembered on every platform, including social media.

A widely shared video recreating the moments of martyrs being killed by the coup soldiers was trending in Turkey on Friday. It is one of the many works to keep the memory of the martyrs alive.

The video features the leading figures killed during the coup attempt, including the Justice and Development (AK) Party's campaign manager, Erol Olcak and his 16-year-old son Abdullah Tayyip Olcak, who were killed when the coup soldiers opened fire on protesters at the Bosporus bridge.

The confrontation between the coup soldiers and Sergeant Ömer Halisdemir, who killed coup leader Brig. Gen. Semih Terzi and died fighting against coup plotters in the Special Forces Command in Ankara, was also shown in the video.

Striking moments that took place on the coup night also circulated on social media as the Turkish people vowed not to forget the bloody putsch bid.

A year ago on the night of coup attempt, Sabri Ünal was run over by fast-moving tanks twice while confronting them https://t.co/dpXruKw4K2 pic.twitter.com/vYQu1R9rJb

One of the unforgettable videos from the coup night shows a Turkish man, Sabri Ünal, who was run over as he tried to stop tanks during the attempted coup in Turkey. He later said that he had tried to throw stones at the tanks but his elbow was shattered when the second tank rolled over his arm.

An unarmed Turkish woman and a mother of 2 fearlessly walked up to soldiers taking over the Bosporus Bridge during last year's coup attempt pic.twitter.com/YjpV8VAewm

Safiye Bayat, a 34-year-old mother of two, was armed with only a thought, that the soldiers would not kill an unarmed woman when she fearlessly walked up to the soldiers taking over the Bosporus Bridge in Istanbul. The bridge was one of the first places the soldiers seized in Istanbul, and coup troops blocked the crossing between the Asian and European sides of the city effectively when they parked tanks and trucks on the busy road. Bayat is the woman in widely circulated security camera footage that shows a woman wearing a headscarf and a backpack walk alone up to a legion of soldiers confronting a crowd of anti-coup activists. Bayat is seen arguing with the soldiers who repeatedly try to keep her away. A soldier hits her with the butt of his rifle, and in the end, one of them shoots in her direction. Fortunately, a bullet only grazed her leg.


Another video showed a man holding a Turkish flag in Ankara confronting five tanks carrying pro-coup soldiers on the night of July 15, when a failed coup attempt was carried out by the agents of the Gülenist Terror Group (FETÖ).

The video shows armored military vehicles proceeding along the Atatürk Boulevard on Çankaya Road in the capital when they were unexpectedly stopped by a man waving a Turkish flag. The man went as far as to lay down in front of the tanks in an attempt to stop them from advancing. The tanks were only able to continue after they forcefully pushed the man away from the road.

On Saturday, July 15, the General Assembly of the parliament will convene at 1.00 p.m. local time (1000GMT) in Ankara with a special agenda followed by a meeting with international press members two hours later.

In Istanbul, a "National Unity Walk" will start at 6.30 p.m local time with the participation of President Recep Tayyip Erdoğan, veterans, and the relatives of martyrs. President Erdoğan will address the public after the screening of a July 15 documentary. He will also attend the opening ceremony of a martyrs' memorial.

Erdoğan is later scheduled to depart for Ankara where he will address the parliament at 2.32 a.m., the time the parliament was bombed on the night of the coup attempt.

Sunday's program will begin with a morning prayer at Ankara's Beştepe Millet Mosque followed by the opening of the July 15 Martyrs' Monument at the presidency complex.

Throughout the week, Turkish embassies across the world will hold memorial services and issue press releases about the coup attempt. Messages will also be shared on mainstream and social media.

According to the Turkish government, the Gülenist Terror Group (FETÖ) and its U.S.-based leader Fetullah Gülen orchestrated the defeated coup of July 15, 2016, which left 249 people martyred and nearly 2,200 injured.