Expectation for Gülen's extradition, trials continue on anniversary of July 15 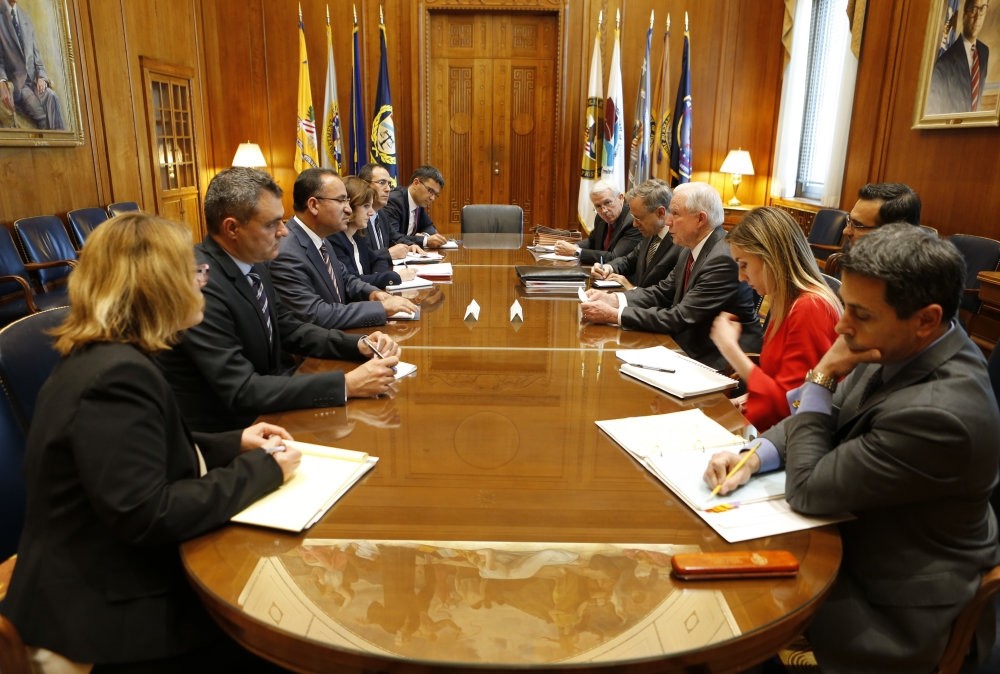 Justice Minister Bozdau011f traveled on May 8 to the U.S and conveyed Turkey's expectations for the extradition of the FETu00d6 leader to new U.S. Attorney General Jeff Sessions.
by Daily Sabah Jul 15, 2017 12:00 am

A year has passed since the failed July 15 coup attempt perpetrated by the Gülenist Terror Group (FETÖ) happened, and the justice system is continuing to carry out the trials of putschist solders involved in the attempt, as the intense efforts to get an extradition of FETÖ leader Fetullah Gülen from the U.S. resumes.

Just a few days after the coup attempt, Ankara immediately launched efforts for the extradition of the FETÖ leader from the U.S. and submitted an official request to Washington on July 19. Turkish authorities sent four different extradition files with charges including attempting to stage a coup, leaking classified information, forgery, and organizing an armed terrorist group. Gülen has not come to Turkey to stand trial, and has denied all allegations.

President Recep Tayyip Erdoğan announced a nationwide three-month state of emergency on July 20 under Article 120 of the Turkish Constitution, which was later approved by the General Assembly.

A U.S. delegation consisting of four people, three officials from the Justice Department and one from the State Department, visited Turkey on Aug. 22. Before the visit of the U.S. delegation, the Justice Ministry concluded preparations ordered by Justice Minister Bekir Bozdağ, and during their meetings, Turkish officials shared important evidence with their U.S. counterparts regarding Gülen's links to the coup attempt.

Following inaction from the Obama administration regarding Turkey's requests, Ankara sent a provisional arrest request to the U.S. for Gülen on Sept. 13.

Under normal procedures, Gülen should have been arrested since Turkish authorities issued an official request for his extradition under a 1979 treaty between Turkey and the U.S. However, Washington did not abide by the criminal-return agreement and did not carry out the provisional arrest.

Turkey officially submitted evidence to the U.S. back in October 2016, regarding the FETÖ network that formed a quasi-state within the Turkish state and attempted to topple the government with the ultimate aim of taking over the state via a vicious coup, and presented the U.S. additional evidence and documents on its arrest request for Gülen.

Justice Minister Bekir Bozdağ traveled to the U.S. and met with his U.S. counterpart Attorney General Loretta Lynch on Oct. 26 in efforts to expedite Gülen's extradition.

In the meantime, while lawsuit processes continue for the coup plotters, Turkish intelligence officers broke the codes of ByLock, a messaging app used for secure encrypted communication by FETÖ. A total of 215,092 FETÖ members are said to have used the app confirmed the indictment prepared by the Istanbul Chief Public Prosecutor's Office.

It was further stated in the indictment that 184,298 of the total ByLock users were revealed by intelligence forces. The prosecutors said ByLock was popular among FETÖ members between 2013 and 2015. After 2015, the terror cult turned to Eagle IM, which offers "256-bit end-to-end AES encryption," according to the app's description on its Google Play Store page.

However, despite all the determined efforts by the Turkish government and Justice Ministry, the Obama administration chose to remain idle and took no action against the U.S.-based terror leader.

Trump's election as the U.S. president remains a glimmer of hope to Ankara for Gülen's detention and his ultimate extradition.

The Turkish people approved the April 16 referendum, which envisages amendments to 18 articles of the country's existing Constitution, including the transition from a parliamentary government system to a presidential system, with 51.4 percent of the votes.

During the referendum period, tension escalated between Turkey and the Netherlands and turned into a diplomatic crisis after Dutch authorities blocked the Family and Social Policies Minister Fatma Betül Sayan Kaya's convoy from entering the Turkish Consulate in Rotterdam and deported her, as well as the Dutch government's decision to deny flight clearance to the plane carrying Foreign Minister Mevlüt Çavuşoğlu.

A month later, Justice Minister Bozdağ conveyed Turkey's expectations for the extradition of the FETÖ leader to new U.S. Attorney General Jeff Sessions. He also traveled in May 8 to the U.S. and held talks with Sessions mainly focused on Gülen's temporary arrest prior to the proposed extradition. In the meeting, Bozdağ also requested that the files sent by Turkey be transferred to the court as soon as possible.

In May 16, President Erdoğan paid a visit to the U.S. and had a face-to-face meeting to discuss several issues, including Gülen's extradition. Eroğan said he had asked the U.S. administration to order the FBI to establish a special investigation committee to analyze FETÖ activities.

Meanwhile, in late May, the trial on the attempted takeover of the military's main headquarters during last year's coup attempt started in the capital Ankara, in a tightly guarded complex of a prison and courtrooms. It was the first time that 221 suspects, including leaders of the junta linked to FETÖ, were on the dock after their arrest in the aftermath of the putsch bid.

The list of defendants represents the alleged masterminds of the coup bid, including Akın Öztürk, who is accused of commanding the pro-coup troops all across Turkey, and those who helped its partial success. Among them are members of the so-called 38-member "Peace At Home Council," which declared the coup on public broadcaster TRT after it was taken over by putschists.