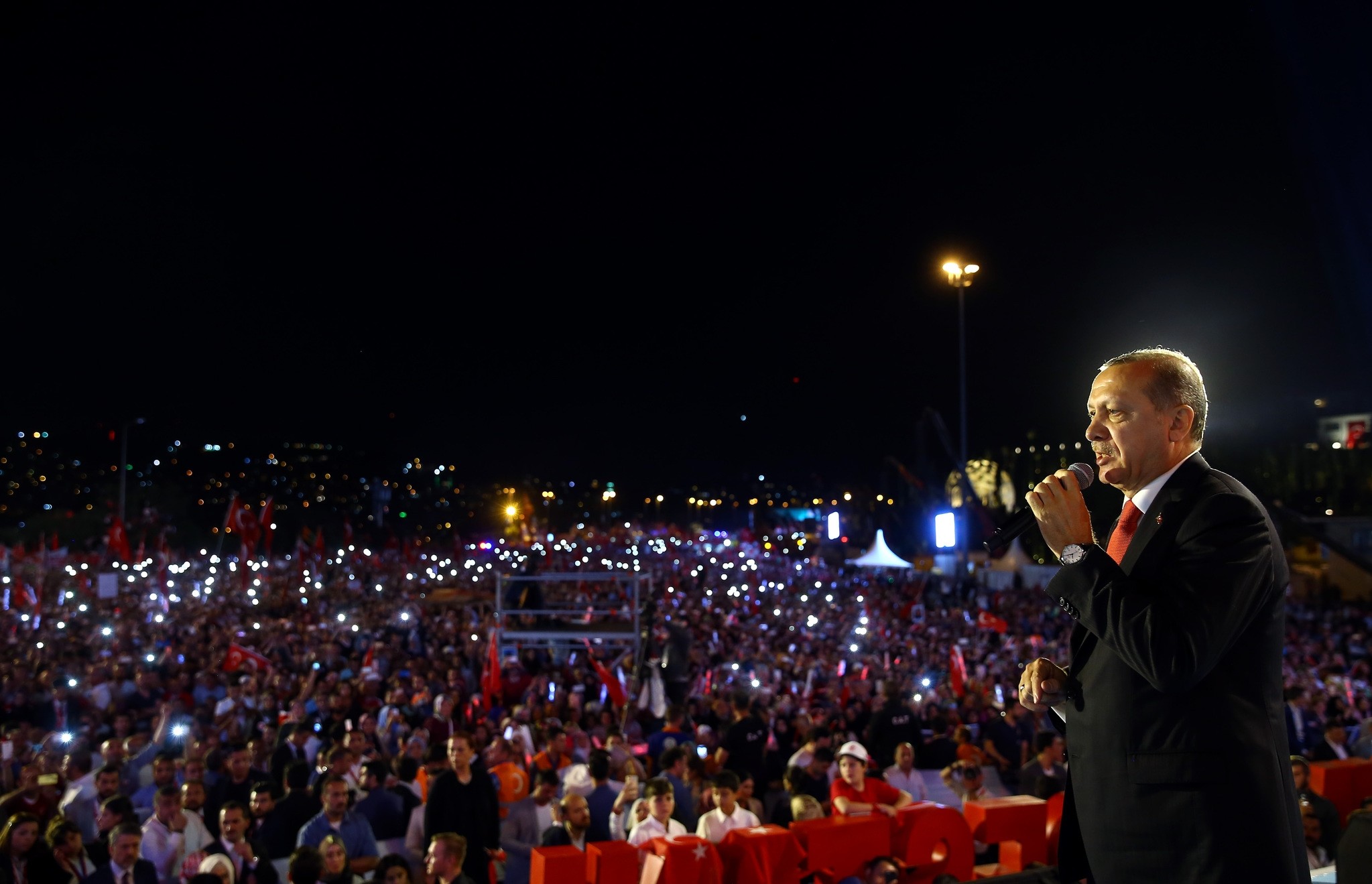 Speaking before tens of thousands of people at the iconic July 15 Martyrs' Bridge on Saturday to mark the anniversary of the failed military coup attempt in which 249 people died resisting, President Recep Tayyip Erdoğan once again praised the nation's perseverance, bravery and strength, and their will to defend democracy against the putschists.

"The pro-coup soldiers were defeated by the nation in Istanbul and Ankara before they even had the chance to take control of other cities in Turkey," the president said.

The Bosporus Bridge, now called the July 15 Martyrs' Bridge, was the scene of clashes between civilians and soldiers in tanks. Erdoğan said that the bridge saw the bloodiest scene that night, and also witnessed the biggest resistance with 36 fatalities.

He also warned that the coup attempt "was not the first and would not be the last" and warned the nation that terror groups would work to undermine the country.

"We will not forget, [and] will not let it [defeated coup] be forgotten. If we do not learn the lessons from July 15, new July 15s would be inevitable," he said.

Erdoğan also said that the FETÖ suspects who are on trial for plotting last year's failed coup should be required to wear the same type of outfit in court to prevent prisoners from wearing provoking outfits.

"These are still their good days. I have spoken with our prime minister and said 'when they appear in court, they should wear one type of outfit, like in Guantanamo.'"

His comment came days after a former soldier who is on trial accused of trying to capture or assassinate Erdoğan on the night of the coup, appeared in court wearing a t-shirt emblazoned with the word "hero," triggering a public outcry.

Erdoğan also lambasted the main opposition Republican People's Party (CHP) head Kemal Kilıçdaroglu over his "controlled coup" remarks, which he said insulted the martyrs and veterans of the defeated coup.

The CHP leader repeatedly claimed that the government knew about the coup attempt in advance but it failed to stop it.

Later, the president unveiled the Monument of Martyrs near the July 15 Martyrs' Bridge to honor those who lost their lives while resisting the putsch.

Earlier, having gathered in Beylerbeyi, Çengelköy, Altunizade and Kısıklı districts of the Asian side of the city, people marched to the bridge amid tight security.

The bridge was closed by putschists on the night of the coup attempt.

Erdoğan is scheduled to address the parliament at 2.32 a.m. local time (2332GMT), the time the parliament was bombed on the night of the coup attempt.

Sunday's program will begin with a morning prayer at Ankara's Bestepe Millet Mosque, followed by the opening of the July 15 Martyrs' Monument at the presidential complex.