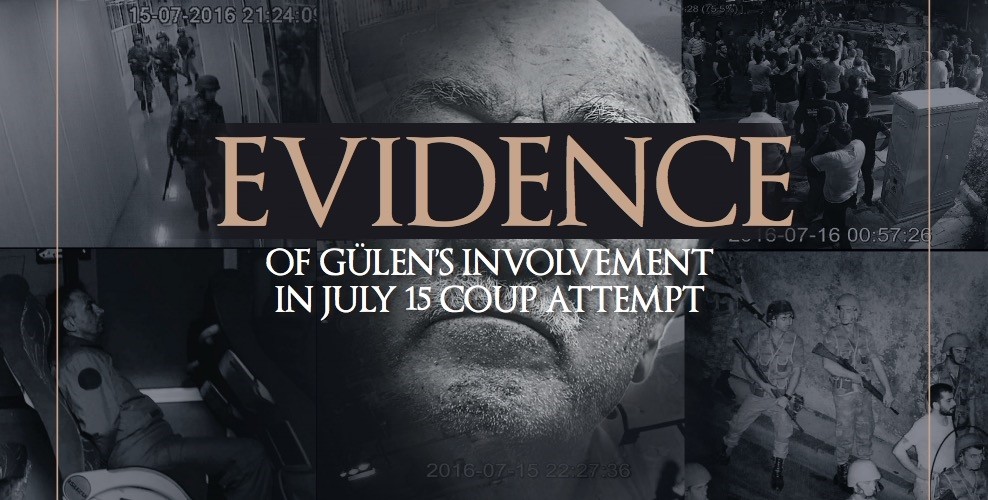 Since the first moments following the failed coup attempt, many of those suspected of involvement in the coup vehemently rejected the accusations made against them, despite clear and tangible evidence showing their links to the bloody attacks and the Gülenist Terror Group (FETÖ) network. FETÖ leader Fetullah Gülen, who has lived in self-imposed exile in the U.S. since 2011, has himself categorically denied any links to the putsch, as well as accusations that he masterminded the incident. He initially claimed that the coup was a plot by the government but when this claim was discredited and prosecutors started to uncover evidence of Gülen's direct links to the coup attempt, he shifted tactics, launching a new argument that some FETÖ members could have been involved but that he himself had no involvement in the act itself, adding that his followers who may have been involved had not taken direct orders from him.

In order to inform the public and the international audience on the subject of the FETÖ suspects' denial, the DS Centre for Policy Studies has compiled a report that contains information on who Gülen is, how FETÖ members infiltrated the Turkish military over the years by committing a barrage of crimes, how the timeline of the July 15 coup attempt unfolded, the explanations that surfaced regarding what happened that night and, most importantly, the tangible evidence of FETÖ's role in the staging of the heinous coup attempt. Concrete evidence includes a range of material, including eyewitness testimony from court records and security camera footage of putschists abducting anti-coup figures and firing on innocent civilians, which counters their claims of having no links to the coup attempt.

Among the pieces of evidence included in the report are details about FETÖ's five top civilian imams (intra-group leaders), who headed the entire coup attempt and were caught on camera at the Akıncı Air Base in the Turkish capital of Ankara. These imams were Adil Öksüz, Kemal Batmaz, Harun Biniş, Hakan Çiçek and Nurettin Oruç. In addition, the actions of pro-coup soldiers and generals throughout the coup attempt were caught on CCTV, including the attempt to assassinate President Recep Tayyip Erdoğan while he was on vacation in the Marmaris district of southwestern Muğla province.

The report also includes testimony from the Turkey's chief of General Staff who gave his account of being taken hostage by FETÖ soldiers, as well as other details about that night, including testimony from pro-coup generals. While some of the generals confessed to their actions and to their ties with the cult, others have denied the allegations, despite clear CCTV footage and other concrete evidence revealing their tangible links to the putsch attempt.

One of these men, Captain Ali Emre Eral, who was dismissed from the Turkish Armed Forces (TSK) after the foiled putsch and promptly arrested, was one of several officers to confess to their ties with the shadowy group.

In addition, the report provides evidence on how FETÖ-linked figures had attempted to capture several strategic locations on the night of the coup attempt, including TV stations and Turkey's state-run satellite operator, TÜRKSAT. These men were identified as engineers from state-run scientific institutions who used to work at the same TV station linked to FETÖ. During the coup attempt, these figures were accompanied by pro-coup troops, who killed TÜRKSAT managers and other officers at the scene.

One of the most concrete pieces of evidence revealing FETÖ suspects' links to the cult is an encrypted messaging application, ByLock, developed for smartphones for the exclusive use of FETÖ members. Many of the suspects detained or arrested from state institutions were found to be ByLock users. According to prosecutors, ByLock was popular among Gülenists for secret communications between 2013 and 2015. Further, after 2015, the terror cult turned to Eagle IM, which offers "256-bit end-to-end AES encryption," according to the app's description on the Google Play Store. The National Intelligence Organization (MİT) hacked the ByLock server in Lithuania in 2014, breaking into the server and compiling the names of users in May 2016. MİT revealed that there are millions of exchanged messages and hundreds of thousands of users in FETÖ's ByLock network.

WhatsApp messages exchanged by pro-coup soldiers have also been used as evidence in legal proceedings, including the exchange of messages sent during the coup attempt on July 15. The report reveals a set of messages that were exchanged in a group set up as "We are Peace at Home," a name that was also used as a name for coup plotters affiliated with the Peace at Home Council, a group of putschists who took over the state-run TRT broadcaster and forced anchorwoman Tijen Karaş read out the coup declaration after the TV station was taken over.