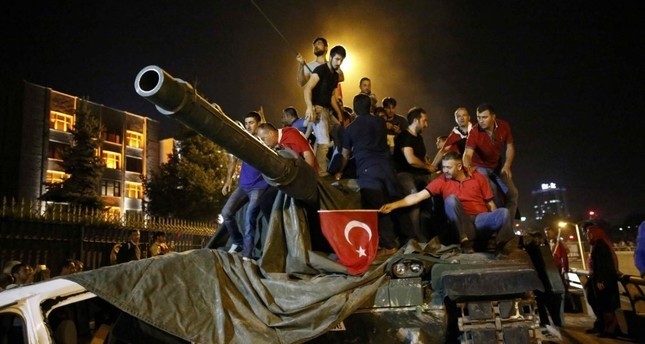 On July 15, 2016, Gülenist terror group (FETÖ) attempted to overthrow Turkey's democratically elected government. As a result of the botched coup, 249 people lost their lives and over 2100 were wounded. Here is a timeline of the failed attempt:

Shots are heard inside the General Staff headquarters in Ankara and a helicopter opens fire on the people outside. Soldiers seize the Bosporus and Fatih Sultan Mehmet Bridges and take control of the General Staff headquarters and state broadcaster Turkish Radio and Television Corporation (TRT). Following the incident, TRT briefly went off the air.

A group of coup soldiers surround MİT headquarters in Ankara. A helicopter flying over the area opens fire on the building.

Prime Minister Binali Yıldırım, speaking over the phone to A Haber, describes what is happening as "an insurrection" and states that the perpetrators are a small group in the military.

A blast occurred at the Police Special Forces Training Academy in Gölbaşi. During the attack, 42 police officers were killed in their sleep. The academy was heavily damaged in the attacks.

Coup forces open fire on civilians in Taksim Square, Vatan Avenue and the Bosporus Bridge in Istanbul, and around the headquarters of the General Staff in Ankara.

President Recep Tayyip Erdoğan starts to connect to TV channels over FaceTime on his iPhone and speaks live to the people, telling them to take to the street and defend democracy against the coup plotters.

Turkish citizens flock to the streets in protest of the coup attempt after the call from President Erdoğan as well as calls for unity from mosque minarets in 81 provinces upon the instruction of the Presidency of Religious Affairs.

The first investigation into the coup attempt is launched in Istanbul, with Küçükçekmece Chief Prosecutor Ali Doğan saying coup soldiers would be detained wherever they were found.

Jets and helicopters attack the Ankara Police Department. Defense Minister Fikri Işık says, "This is a coup attempt by a junta in the Turkish Armed Forces."

A total of 13 soldiers, including three senior officers, are detained while attempting to take over the Presidential Palace complex in Ankara. A MİT spokesman says the coup has been thwarted.

Parliament was surrounded by tanks in the early hours of July 16. A military helicopter fired on Parliament at 2:42 a.m. During the assault, 100 deputies had gathered in the General Assembly hall for a live broadcast meeting. Deputies from three political parties sought shelter inside the building. Moments after bombs were heard, they posted pictures on social media showing the damage inside Parliament. The building was bombed 11 times throughout the night.

Parliament is bombed again and the Parliament speaker and deputies take cover in the building's bomb shelter.

Prime Minister Yıldırım, speaking live again over the phone to private broadcaster NTV, compares those attacking institutions with jets to members of a terrorist organization.

TRT goes back on the air and continues broadcasting. The coup soldiers who tried to seize TRT's head office are arrested.

Prime Minister Yıldırım warns that every military helicopter or jet flying over Ankara and over critical areas such as the MİT headquarters, Parliament, the Prime Ministry or Presidential Palace complex will be shot down.

President Erdoğan's plane lands at Atatürk International Airport in Istanbul, and a hoard of people is there to greet him.

A military helicopter attacked the Gölbaşi Ground Station of Türksat in Ankara, the country's leading satellite communications and cable TV operations company that provides satellite telecommunication and operates Turkish communications satellites. Two staff members lost their lives, and three were injured while trying to resist. It was reported later that the helicopter used in the attack on Türksat had crashed.

The Ankara Chief Public Prosecutor's Office rules on the custody of the members of the coup plotters' Peace at Home Council and those in the judiciary who are affiliated with the Gülenist Terror Group (FETÖ).

President Erdoğan speaks to the media at Atatürk Airport and gives details about the coup attempt.

Helicopters open fire on the hotel in Marmaris where President Erdoğan had been staying before leaving around midnight. Masked soldiers in heavy gear besiege the hotel, injuring five police officers in the ensuing clash.

Prime Minister Yıldırım tweets that 130 soldiers, including high-ranking brass, had been arrested and one putschist general had been killed.

The Gölbaşı Chief Public Prosecutor's Office launches an investigation into the coup attempt. The area is brought back under control after an attack on the Gölbaşı Special Operations Center kills 42 people.

All streets leading to the Prime Ministry in Çankaya and the ministry's official residences, all of which are located in a security zone, are closed. Loyal Air Force pilots shoot down a military helicopter that bombed the TürkSat facility in Ankara's Gölbaşı district.

50 coup soldiers surrendered on the Bosporus Bridge in Istanbul, which they had held throughout the night. The bridge was one of the first locations secured by coup forces during the initial stages. The soldiers on the bridge surrendered. Dozens of people were killed by snipers, gunshots and tanks. The bridge has been renamed the July 15 Martyrs' Bridge to commemorate the civilians who lost their lives there.

Coup forces in a military helicopter bomb the gendarmerie's headquarters.

Reuters reports that the General Staff building is under the control of soldiers loyal to the government.

Gen. Akar, who was taken hostage by coup forces, is released.

Gendarmerie General Command is secured by another team of Special Forces.

The Justice Ministry announces that 1,374 Turkish Armed Forces personnel have been detained.

A no-fly zone is declared in the Marmara region, including Istanbul.

A helicopter lands in Greece with seven coup-affiliated soldiers and one civilian seeking asylum.

The Supreme Board of Judges and Prosecutors (HSYK) suspends 2,745 judges.