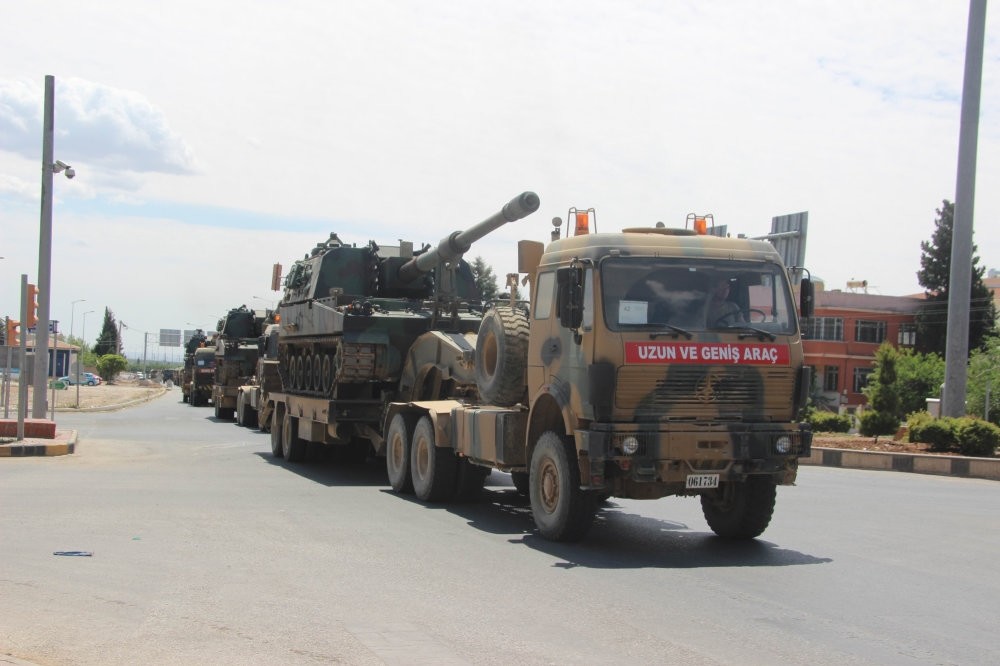 The Turkish military increased its presence in the border city of Kilis, near Afrin province in Syria.
by Daily Sabah Jul 20, 2017 12:00 am

While there have been rumors that Russia is piling presure on the PYD to hand Afrin over to the Assad regime, Turkey reportedly wants local elements to take over. Ankara reiterated in its latest National Security Council meeting that it will not allow a ‘terrorist state' to be formed along its southern border

Turkey continues to pursue a wait-and-see policy on the Democratic Union Party (PYD)-held town of Afrin in northern Syria, stressing that any threat or attack will be retaliated in kind as Ankara still rejects the idea that the town should be handed over to the Bashar Assad regime rather than local elements. According to reports in Turkish media yesterday regarding the National Security Council (MGK) that convened on Monday, Ankara reiterated that it will not allow a terrorist state to be formed along its southern border where the PKK-affiliated PYD asserts its dominance. The reports contended that the political and military authorities within the MGK were on common terms that any threat from PYD-held areas should be retaliated against.

Furthermore, Ankara has continued its insistence that Afrin should be handed over to local elements rather than the Bashar Assad regime.

There have been rumors that Russia has been piling up pressure on the PYD, and its armed wing the People's Protection Units (YPG) to either hand over the town to the Assad regime or be faced with a Turkish military offensive.

High-level diplomatic sources recently told Daily Sabah Iran and Russia were willing to negotiate the future of Afrin in favor of Ankara if the Turkish government gave the green light to making concessions in other parts of Syria.

Even though Ankara underscored in the MGK meeting that threats from Afrin could end up as a Turkish offensive, the sources said that "Russia and Iran do not favor a Turkish military operation in Afrin."

"It is one of the most significant areas in terms of Turkey's national security. Afrin means Turkey," the authorities were quoted as saying in the HaberTürk daily yesterday.

The Turkish military was expected to launch an operation near the Turkish border town of Kilis to take the PYD-held Afrin, Tal Rifat and Minnigh Military Airport in late June. However, the operation was delayed due to Ankara's wait-and-see policy.

Ankara has long warned the PYD against remaining along the Turkish-Syrian border, saying that it would not allow the formation of a terrorist state along its borders in northern Syria.

US WEAPONS TO YPG OBTAINED BY PKKA statement released by the presidency after the MGK meeting said that weapons supplied to the YPG/PYD by the U.S. have been obtained by PKK terrorists.

"In security operations against PKK militants, U.S. weapons were seized," the statement noted.

The MGK statement underlined that how the PKK obtained weapons supplied to the YPG shows that Turkey is right in warning the U.S. and objecting to the weapons supply.

The Donald Trump administration approved a motion in May, authorizing the weapons supply to the PKK-affiliated group for the Raqqa Operation. The terrorist group was provided with heavy weapons, armored vehicles and ammunition as well as equipment.

The Turkish government fears that the weapons supplied to the YPG are directed at the Turkish military by way of the PKK.

Interior Minister Süleyman Soylu had previously said that the weapons were being placed in the hands of terrorist groups by their "allies" and they were being used against Turkish security forces.

"Those who act like our allies and friends supply weapons to the [YPG's armed wing, the Democratic Union Party] PYD. You would be baffled if you saw the weapons seized in the caves [used by the PKK]. The weapons get in the hands of the PKK and are being used against us," Minister Soylu said in April.

U.S. Secretary of Defense James Mattis previously sent a letter to his Turkish counterpart Fikri Işık, pledging to retrieve all weapons from the YPG once the Raqqa operation is complete. In the letter, Mattis said that the U.S. was in a tactical cooperation with the PKK-affiliated YPG, underlining that the U.S. was guaranteeing transparency in this relationship.

However, Turkey remains doubtful that all weapons in the hands of YPG terrorists will be taken back. President Recep Tayyip Erdoğan said on July 5 that it was "impossible to believe" that they will all be returned.