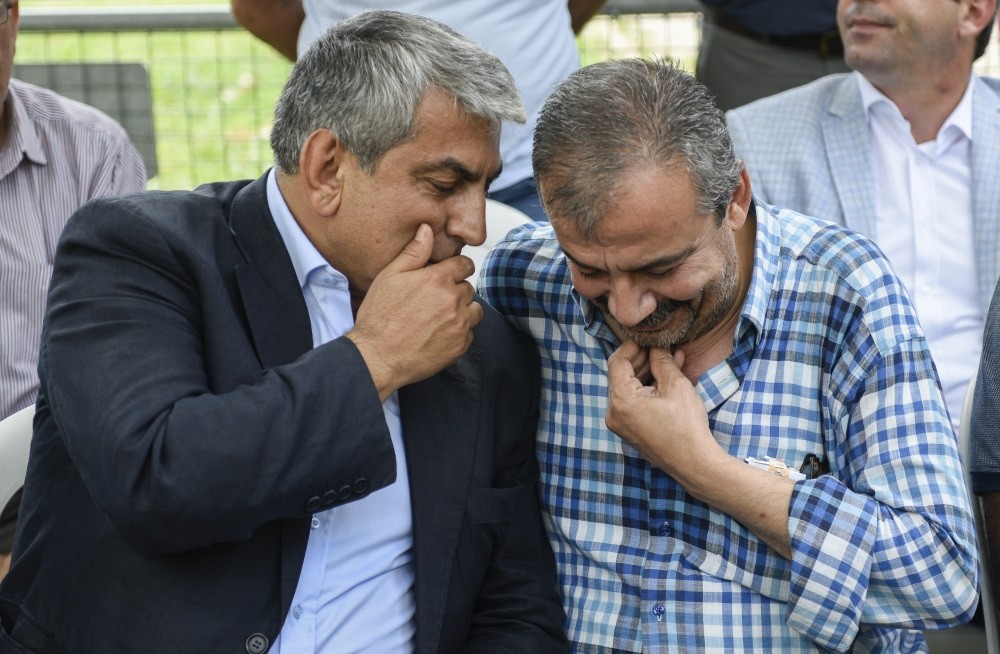 The Republican People's Party (CHP) extended its support to the pro-PKK Peoples' Democratic Party (HDP) as some CHP deputies Wednesday visited their HDP counterparts in Istanbul where HDP deputies have been organizing "Watch for Justice" events held across the country, calling for a return to the reconciliation process.

Delivering a statement at Yoğurtçu Park in Istanbul's Kadıköy district, the CHP's İstanbul branch head Cemal Canpolat and CHP Istanbul deputy Sezgin Tanrıkulu urged the Turkish state to return to the rapprochement process, saying: "A reconciliation process is required." Canpolat added, "I urge citizens to stand by our friends," calling on citizens to lend support to the HDP's "Watch for Justice."

The CHP Istanbul deputy and branch head paid the visit as a show of support for the HDP, which commenced its "Watch for Justice" events on July 25 in the southeastern province of Diyarbakır to protest the arrests of HDP co-chairs Selahattin Demirtaş and Figen Yüksekdağ.

Drawing attention to the HDP's "Watch for Justice," Canpolat said that the CHP is of the opinion that a comprehensive reconciliation process for democracy and peace is required to solve Turkey's problems. The head of the CHP's Istanbul branch argued, therefore, that his party supports the HDP's protests.

Commenting on the events, Tanrıkulu said that the CHP and the HDP are "here to be in solidarity" and may meet on common political terms.

Previously, CHP Diyarbakır head Mehmet Sayın paid a visit to HDP members participating in the "Watch for Justice" in Diyarbakır.

The HDP announced on July 20 that the party will hold a "Watch for Justice" across the country, and first event held in the scope of the watch began on July 25 in Diyarbakır and lasted seven days. The second step of the protests began in Istanbul on Wednesday at Yoğurtçu Park and are expected to last seven days before the next batch of protests begin in western İzmir province.

The pro-PKK party's decision to be "on the watch for justice" across the country came after CHP Chairman Kemal Kılıçdaroğlu completed a 400-kilometer "Justice March" from the capital city Ankara to Istanbul on July 9. The HDP lent its support to Kılıçdaroğlu's march, with HDP lawmakers marching alongside Kılıçdaroğlu.

The CHP's support for the HDP's "Watch for Justice" is not the first time that the two parties have joined forces against the government. On May 15, 2016, then-HDP spokesperson İdris Baluken urged CHP deputies to cooperate in drafting a bill that called for a case regarding the lifting of parliamentary immunities to be referred to the Constitutional Court.

In April 2016, former CHP deputy chair and spokeswoman Selin Sayek Böke called on the HDP to work together in Parliament, saying, "The CHP and the HDP need to form a parliamentary alliance against the ruling Justice and Development Party [AK Party]."

CHP members have sent signals about forming an alliance with the PKK-affiliated HDP. Two days after the June 7 elections, Şafak Pavey, a CHP deputy, famously congratulated HDP co-chair Selahattin Demirtaş in front of members of the press, saying: "We shook things up quite well."

Former CHP Vice Chairman Murat Özçelik was criticized by CHP Antalya deputy Deniz Baykal for voting for the HDP in the 2015 elections. Baykal also accused some CHP deputies of being pro-HDP, pointing to Kılıçdaroğlu's poor management.