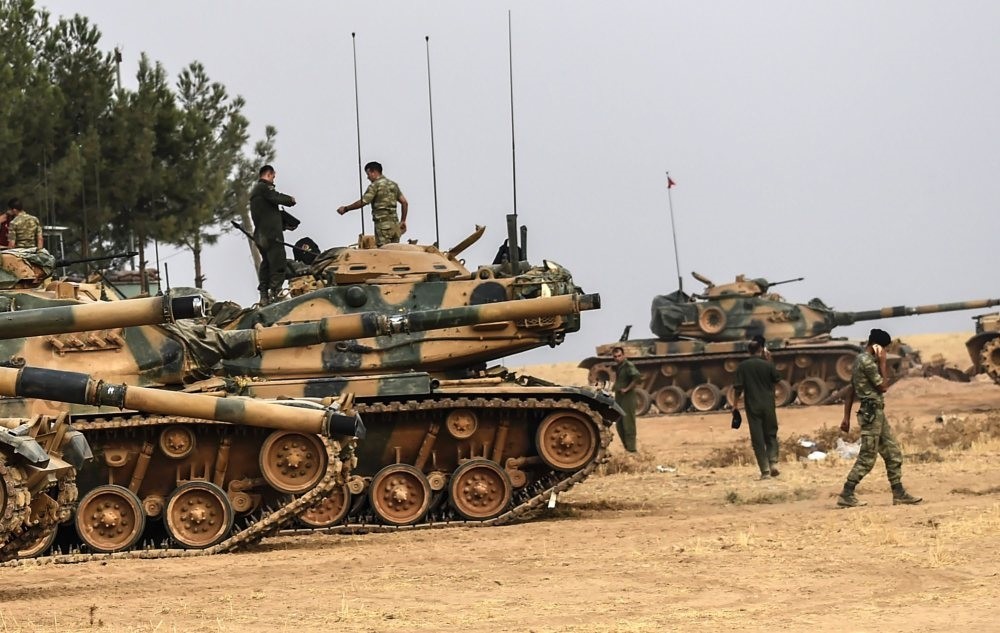 Turkish tanks around 5 kilometres west of the Turkish Syrian border city of Karkamu0131u015f in the southern region of Gaziantep, Aug. 25, 2016. Turkey drove Daesh from its border with Operation Euphrates Shield.
by Daily Sabah Aug 08, 2017 12:00 am

An arrested Daesh member testified that after Ankara's increased security measures on the Syrian border and Operation Euphrates Shield, members of the terrorist group have been unable to cross Turkish border to carry out attacks

A Daesh militant arrested in Tekirdağ province last week has said that members of the terrorist organization have had great difficulty infiltrating Turkey's borders in recent months and are now taking advantage of crowded border crossings ahead of the Bayram (Feast of Sacrifice) holiday.

According to an article in Turkish Habertürk daily, a Daesh militant responsible for tank maintenance in Syria, Abdurrahman A., who was arrested in northwestern Tekirdağ, reportedly entered Turkey to organize a terror attack. He stated in his plea that "The organization [Daesh] has difficulty sneaking its members across Turkish borders from Syria. For this reason, they send militants with fake identities who mingle with the large crowds that travel during the Bayram [Feast of Sacrifice] holiday."

The militant who indicated that he paid $700 to obtain his fake identification card before entering Turkey on July 7 said: "I stayed in Gaziantep for a while. My sister is married to Abdüllatif A., who is also a Daesh militant. The son of my uncle Abdüllatif also died while fighting within the ranks of the organization. On the other hand, my father lives in Azez. He was a tank driver during his military service. I don't know whether or not he is working for Daesh now." The detained militant added that he had no intentions of carrying out an attack in Turkey.

The militant was arrested and sent to jail.

Meanwhile, five other Daesh members who came to Istanbul to carry out attacks were also detained. In a joint operation launched by the Turkish Intelligence Organization (MIT) and police forces, two houses were raided in Istanbul's Başakşehir's district. Along with the five suspects detained, three pistols and digital documents were seized during the operation.

Daesh is blamed for a string of attacks in Turkey, ranging from suicide bombings to shootings. In January, a Daesh gunman stormed a popular nightclub in Istanbul where he killed 39 people during a New Year's Eve celebration. The gunman was caught a few weeks later. Since then, the terrorist organization has been unable to carry out attacks inside Turkey thanks to intense operations launched by Turkish security forces.

Last month, 37 suspects including six people who were reportedly plotting to carry out a suicide bombing on a march being held by the main opposition Republican People's Party (CHP) and its leader Kemal Kılıçdaroğlu were also arrested.

Turkey is one of the many main enemies of Daesh, a terrorist group that emerged in neighboring Iraq and Syria. Turkey is also tackling an influx of foreign fighters looking to sneak into Syria and Iraq where Daesh controls towns and a large swathe of territories. Since Daesh's emergence, Turkey has detained over 5,000 Daesh suspects and deported over 5,000 foreign terrorist fighters from 95 countries.

President Recep Tayyip Erdoğan said in July that Turkey also barred the entry of over 53,000 terrorist suspects and destroyed Daesh terrorist strongholds along its border with Syria, allowing 100,000 Syrians to return to their homes.

Turkey also launched Operation Euphrates Shield last year and backed Syrian opposition groups fighting Daesh in Syria. The operation, which took place from August 2016 to April 2017, drove the terror group away from Turkey's border with Syria and saw the liberation of the Syrian towns of Jarablus, al-Rai, Dabiq and al-Bab from Daesh control.