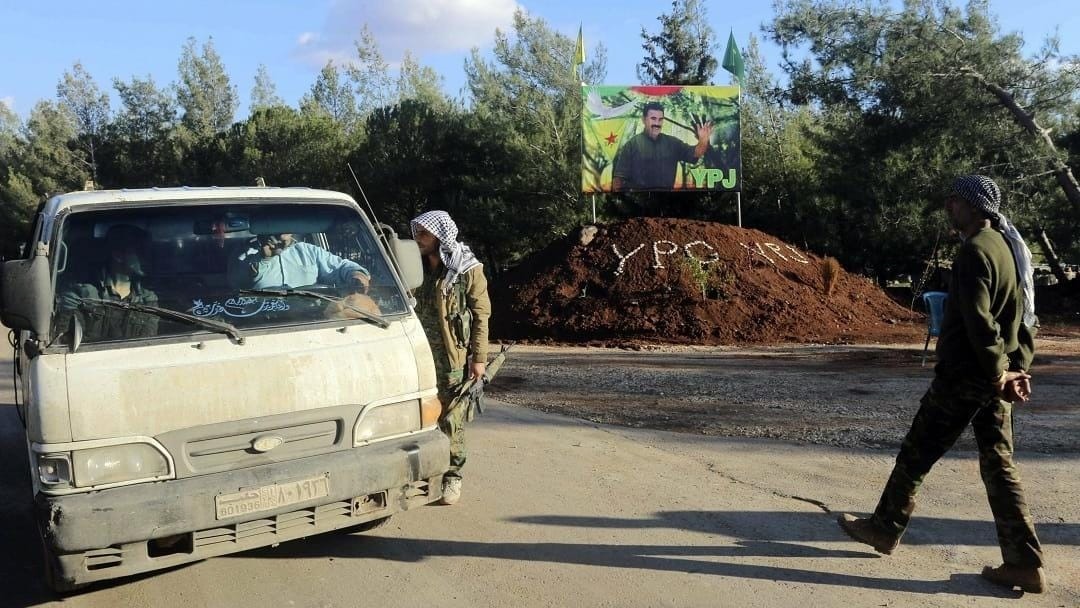 The PKK’s Syrian wing the PYD once again revealed its true ideological identity by barring thousands of Arabs from voting in elections. Having forcibly displaced, oppressed and arbitrarily arrested Turkmens, Arabs, and even dissident Kurds, the group continues to use racist policies against civilians living under its rule

The PKK terrorist group's Syrian affiliate, the Democratic Union Party (PYD), will prevent thousands of Arabs from voting in local elections to be held in territories under its control, a senior terrorist said in an interview with the Syria Direct news website.

The piece published in early August showed the PYD's racist policy toward those who are not Kurds.

The terrorist group supported by the U.S. has forcibly relocated Turkmens before, and is also known to have shut down many mosques due to its strict Marxist and materialistic ideology promoted by imprisoned PKK leader Abdullah Öcalan.

In the interview, Fouzah Youssef, the co-president of the so-called "Democratic Federation of Northern Syria's Executive Committee" agreed that many Arabs will be barred from joining the elections scheduled to be held by the group in September.

The al-Ghamar Arabs, nicknamed the "the Arabs of the Flood" are "not being excluded" from the election process, but rather they "will have limited participation due to their special status," the terrorist told Syria Direct's Mohammad Abdulssattar Ibrahim in the interview.

Citing the Arabization policy of the Baathist Assad regime, the ideological foundations of which are based on Arab nationalism, the PYD member referred to al-Ghamar people as "the foreign occupants" of northern Syria.

Even though the Arabs resettled in Al-Hasakah, -which is currently under PYD rule— from Raqqa in 1970s were forcibly sent there by the Syrian regime, Youssef holds them responsible and said many of them will not be allowed to vote.

"These Arabs came to the Jazirah canton [which encompasses Al-Hasakah province] as a result of a political decision made in the last century. That decision was a wound to this area and the people. The Kurdish people had their land taken and forcibly handed over to the Arabs. It was a racist and unfair policy against the Kurds," the militant told the interviewer.

The PYD has been trying to change the demographics of the area it controls. Emboldened by U.S. military aid, the terrorist group's forced migration of Arabs and Turkmens, as well as arbitrary arrests targeting critical voices and the recruitment of child soldiers, have been covered by international human rights groups, including the Human Rights Watch, Amnesty International and KurdsWatch.

In 2016, PYD forces abducted Ibrahim Biro, the chairman of the Syrian Kurdish National Council (ENKS), in the city center of al-Qamishli, before forcing him to leave the country, threatening to "cut him into pieces" if he returned.

The PYD's oppression of rival political voices, including burning down their offices, arresting or kidnapping members, has been voiced as a concern by many Kurds in northern Syria. The Kurdish National Council in Syria (KNC) has been a critical voice against the arrests and abductions carried out by the PYD.

The Syrian terrorist group is not different from its sister group. In 2015, a senior member of the PKK revealed the group's true ideological identity in an interview. Even though the PKK and the PYD purport to be "humanist" and "egalitarian," Duran Kalkan managed to shock everyone, even his supporters, in a strictly racist set of remarks.

Pledging to "send Turks back to where they came from 1,000 years ago," he also slammed the "1,000-year-old brotherhood" expression which is widely used to emphasize the brotherhood between the Turks and Kurds, saying that the expression is "nonsense" and such a fraternity is "impossible."

In the interview, the high-ranking terrorist also blamed Kurdish supporters of Turkey's ruling Justice and Development Party (AK Party), labelling them as "enemies of the Kurds."

Since then, over 600 security personnel, including troops, police officers and village guards, have died in PKK attacks, and more than 7,000 terrorists have been killed during operations across Turkey and northern Iraq, according to the military.