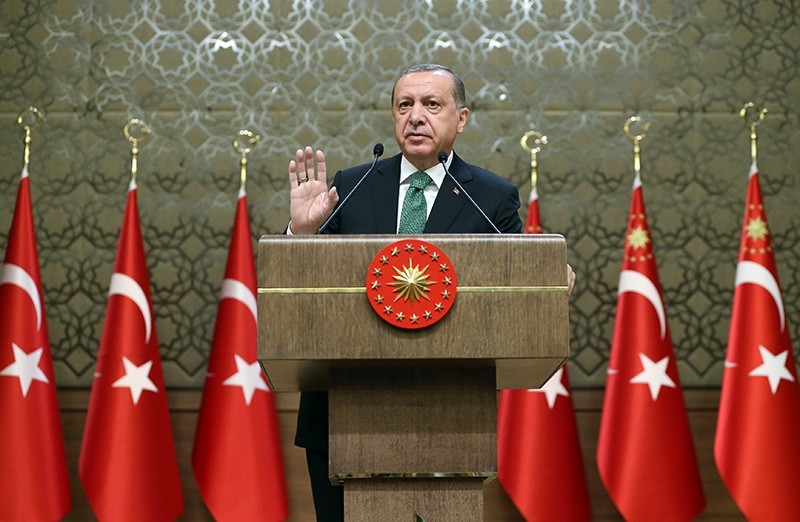 The main role of the state of emergency is to defeat terrorism, President Recep Tayyip Erdoğan said Tuesday.

Emergency powers were introduced in the days after the last year's attempted coup and have allowed the government to arrest tens of thousands suspected of involvement in the bid or of ties to terror groups such as the PKK.

"The most important feature of the state of emergency is to defeat terrorist organizations and bury them," Erdoğan told a meeting of local officials known as mukhtars at the presidential complex in Ankara.

He added: "My responsibility as head of state will not be fulfilled until my people from the southeast, east and my [whole] country achieve peace."

The state of emergency was extended for a further three months in July and has also been used to pursue those suspected of ties to the Gülenist Terror Group (FETÖ), which is said to have orchestrated the coup attempt.

"We only have one flag, one land and one state, one state within 780,000 square kilometers," Erdoğan said. "We will destroy those who want to divide this land."

"As long as there is no cooperation with terror organizations such as FETÖ, PKK, Daesh, or DHKP-C [a far-left terrorist group active in Turkey] left, our hearts and arms are open to everyone, no matter what origin, disposition or lifestyle," he said.

Erdoğan said Turkey would continue to grow and continue to carry out projects that will contribute to its growth.

"Those who want a Turkey that fulfills all their wishes and follows their orders, rage when Turkey follows its own agenda and shows an honorable and upright stance," he added.

The president said Turkey would "never allow" the PKK/PYD -- the Syrian affiliate of the PKK, which has waged a 33-year war against Turkey -- to "establish a so-called state in northern Syria".

The PKK/PYD controls large swathes of northeast Syria along the Turkish border and a pocket of land around Afrin in the west. Turkey is determined not to allow the group to join these areas to gain control of the frontier.

Erdoğan said calling such an entity a "Kurdish state" would be an insult to Kurds.

"I believe that my Kurdish brothers will never give an opportunity to such a formation in the north of Syria and south of Turkey," he said.