Turkey will not allow PYD to germinate in Afrin, Erdoğan says 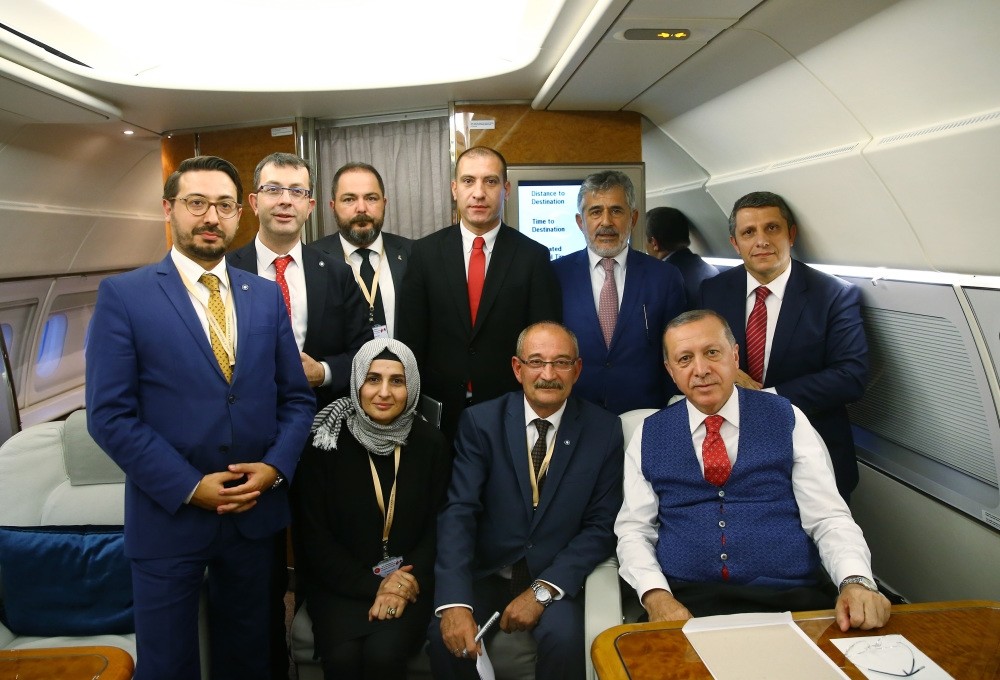 President Erdou011fan said that one reason why Turkey undertook Operation Euphrates Shield in Syria was to block any terror corridor by the PYD.
by Serdar Karagöz
Aug 23, 2017 12:00 am

President Erdoğan reiterated Ankara's determined stance against the establishment of a terrorist state along its southern border, saying that the aims of opening a terrorist corridor to the Mediterranean will not be allowed

President Recep Tayyip Erdoğan said Turkey will not hesitate to eliminate any threat emanating from the strategic Afrin pocket, the northwestern Syrian region neighboring Hakkari province to the west and Kilis to the north, by PKK/PYD terrorism which looks to create a corridor to the Mediterranean. Speaking to reporters late on Monday on his way back from an official visit to Amman, Jordan, Erdoğan said there was no equivocation among Turkish authorities to take action if there was any chance the PKK's Syrian wing, the Democratic Union Party (PYD) emerged as the dominant factor in Afrin.

"In Afrin, there are Kurds sympathetic to Turkey and there are Kurds supporting the PYD. It pains me to use the word 'Kurds' because Turkey has no problems whatsoever with our Kurdish brothers. Just as we do not approve of the attitude of seeing all Kurds as supporters of the PKK, we do not approve of people who see all Kurds in Afrin as supporters of the PYD." The PYD and its armed-wing, the People's Protection Units (YPG), have been receiving significant weapons support from Turkey's NATO ally the U.S. despite Ankara's repeated admonishments. The PKK has been recognized by the U.S. and the EU as a terrorist group.

However, U.S. administrations, both Obama and Trump, have claimed that the PYD and the PKK are not one and the same, arguing to the incredulous Turkish government that the groups that share militants, arms, ideology and leadership, are completely different.

He described what the PYD was trying to do in Afrin as "the creation of a corridor to the Mediterranean." One reason why Turkey undertook Operation Euphrates Shield, a military incursion into northern Syria against terrorist groups, was to block any terror corridor by the PYD, Erdoğan said. "Operation Euphrates Shield succeeded in cutting through the PYD's plans. However, that was not the end of their ambitions. We now have Afrin. Our discussions concerning Idlib are also continuing. I will not divulge any details but things are proceeding according to plan."

Erdoğan said there were Kurdish clans in Afrin that cooperated with Turkey. He said Afrin's strategic importance obligated Turkey to take immediate action if its security was threatened by developments in the region. "We have discussed this matter with both Russia and Iran. During the visit by Iran's Chief of General Staff [Maj. Gen. Mohammad Baqeri], he talked about the matter with myself, our chief of staff and the National Intelligence Organization (MİT)." Baqeri visited Turkey last week. Erdoğan said the dialog between the three nations concerning developments in Syria will continue in the future.

Erdoğan said more than a thousand U.S. trucks had traveled via northern Iraq to deliver arms to the PYD in northern Syria. "What do they carry? Armed vehicles and significant amounts of ammunition. But we have no details. Americans tell us that they have all the serial numbers of the weapons and would be collecting them back from the PYD once Raqqa is taken from Daesh."

However, similar promises were made in Iraq and they were all broken, Erdoğan said, noting that the PKK in northern Iraq was armed with U.S.- and Russian-made weapons. "Still, the mistakes they made forced us to learn to act on our own interests in certain areas. They allowed us to acquire knowledge and experience. They also allowed us to build our own weapons."

On the matter of Turkey-Iran military cooperation against PKK concentrations in Iraq's Qandil Mountains, which he alluded to before boarding his flight to Jordan earlier on Monday, Erdoğan said: "Right now, the PJAK [PKK's Iran wing] is bothering Iran. While there are certain difficulties in harmonizing with Iran, they are calling us to join efforts to combat terrorism. This may happen in Qandil against the PKK. Our foreign ministries, intelligence officials can discuss this matter and we will assess their applicability in accordance with developments."

On his bilateral discussions with King Abdullah of Jordan, Erdoğan said there were several topics of conversation during the visit, with the most important being the Israeli encroachment on Al Aqsa Mosque, the third holiest site in Islam after Mecca and Medina.

He noted that Jordan was the official protector of the Al Aqsa Mosque compound and Turkey was always behind Amman in its efforts to protect and preserve the status of the holy site, Erdoğan said. "I had spoken to the king after the recent problems concerning Jerusalem. It was possible to end the crisis through our joint efforts."

He also commended Jordan for its unblemished support for Turkey against the Gülenist Terror Group (FETÖ), which is responsible for last year's deadly coup attempt. "Jordan took immediate steps to end FETÖ presence in the country. There are around 130 Jordanian students in Turkey, and Jordan itself is important for Arabic studies. We would like regular student exchanges. We also have a lack of vocational schools in Jordan, which we proposed to build."

He said he would be in New York with King Abdullah in the second half of September for the annual opening of the United Nations General Assembly.

Erdoğan, who made his first visit to Jordan as president, said he had invited the king to Turkey and hopes he would make time before the end of the year. "My visit took place at a time of incredible heartache and troubles in the region. Almost half of Jordan's population of 10 million is of Palestinian descent. Now, there are around 1.3 million Syrian refugees in the country."

The president said Jordan faced huge economic difficulties and that there were significant opportunities for Turkish firms to lend a helping hand, especially in the energy, water and defense sectors.

The discussions with the king centered on the need to protect the territorial integrity of Syria and Iraq, Erdoğan told reporters. "Jordan is very concerned over Hashd al-Shaabi groups dividing Tal Afar and infiltrating Syria." Turkey and Jordan also agreed on the need to find a diplomatic solution to the crisis in the Gulf, he said, as well as, encouraging efforts to unite al-Fatah and Hamas to bolster Palestinian negotiating strength.

On the Kurdistan Regional Government's (KRG) plan to hold a referendum late in September, Erdoğan said high-level discussions with KRG officials and Baghdad continued. "My MİT undersecretary went to Baghdad and Irbil. [Foreign Minister] Mevlüt Çavuşoğlu is going to Baghdad on Wednesday [tomorrow] and will later go to Irbil. We are opposed to the referendum. It is tantamount to dividing Iraq. They should focus on better governance of the KRG rather than the referendum."

The president, who is also the head of the ruling Justice and Development Party (AK Party), said all the local party conventions had been held. When asked if he was satisfied with the restructuring of the AK Party, Erdoğan said: "It's too early to tell. We'll see during the 2019 elections. I constantly tell my party colleagues that there is no room for mistakes, corruption, criminal activities among party cadres. I tell my colleagues to find anyone guilty of such acts and cleanse the party."

When asked about the possibility of early elections, he dismissed such an eventuality as a waste of time and resources.