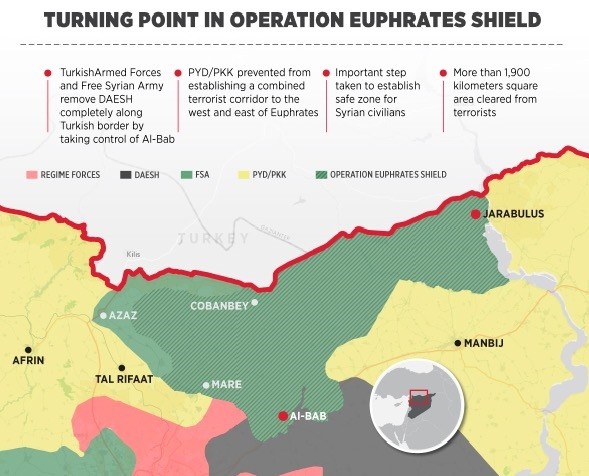 Today is the first anniversary of the launch of Turkey's Operation Euphrates Shield, which completely removed Daesh from Turkey's southern border and prevented the PKK Syrian affiliate Democratic Union Party (PYD) and its People's Protection Units (YPG) militia from unifying its cantons while providing a terrorism-free zone in Syria that is more than 2,000 square kilometers. In year one, the operation continues to be a successful example for upcoming counterterrorism operations, and Ankara is now in preparation to launch a new operation against the YPG in the city of Afrin in northern Syria.

On March 29, Prime Minister Binali Yıldırım announced that Operation Euphrates Shield had successfully come to an end. In the operation, Daesh was defeated in its strongholds and Turkey seized more than 2,000 square kilometers in northern Syria, and the minister added that more than 50,000 refugees were to be relocated back to their hometowns. By Feb. 25, all of the mentioned 50,000 refugees had returned to their liberated cities, among which are Jarablus, al-Bab, al-Rai and Azaz, all in northern Syria.

Launched on Aug. 24 last year, Euphrates Shield was initially meant to clear the border of the threat of terrorism from the Daesh and the YPG. Regarding the operation, Ankara had said that it is an act of defense since its cities and towns were under constant attack from both Daesh and the YPG, and that is why they should be driven from the border. By successfully achieving its aim, Turkey managed to force the YPG to withdraw to the east of the Euphrates River while completely cleaning northern Syria of Daesh.

In addition to the elimination of the threats of terrorism, the operation also showed that Turkey was in a true fight against Daesh, in contrast to some claims that it was not, while also establishing an example of how to fight against terrorism. Furthermore, Euphrates Shield's campaign against al-Bab also destroyed the argument that Turkey did not have the military capacity to aid the push against Raqqa, as Adam McConnell, an academic at Sabancı University, mentioned in his analysis of the operation to Anadolu Agency (AA).According to McConnell, Turkish citizens are generally highly aware of the military's accomplishments, "but the international community, blinded by both hateful rhetoric aimed at the Turkish government and by faulty analyses of last year's Gülenist coup attempt, are far less understanding of the situation."

In addition to this, by relocating refugees back to their hometowns, Turkey also led to the rehabilitation of those cities. The population of al-Bab, which is a town that was one of the objectives during Euphrates Shield, fell to nearly 20,000 under Daesh control, but has risen to around 80,000 after the operation liberated the area. Turkey has also given a huge amount of support to the people of al-Bab to help normalize life in the town and to ensure residents can safely return to their homes.

"In all, the active portion of Euphrates Shield lasted slightly more than seven months. Now efforts are devoted to providing security, rebuilding infrastructure, providing various supplies, such as food and medical aid, and building buildings like schools. Turkey bears by far the largest burden of these expenses," McConnell said.

The same supportive mechanisms have also been active for Daesh-held towns and villages. The first step to get life back to normal has been to establish security units and local assemblies that consist of only Syrians. The reconstruction of liberated towns has also started to rebuild the infrastructure following the operation. Turkish humanitarian state institutions and as nongovernmental organizations have helped to build and restore schools, hospitals and bakeries to meet basic needs.

In the same speech in which he declared the end of the operation, Yıldırım also said: "From now on, if we take action against Daesh or anything else that threatens our security, it will be a new operation."

On Aug. 6, after five months when Euphrates Shield came to an end, Ankara signaled a new ground offensive in Syria that Yıldırım referred to and President Recep Tayyip Erdoğan said the military will make new moves in the region. The Turkish military has recently deployed military vehicles to the border province of Kilis, just across Afrin. The convoy, consisting of six howitzers, tanks and other military vehicles, arrived in the city at night after advancing to the border amid security measures.

Meanwhile, there have been many protests in Syria asking for help against the PYD in the region. At the beginning of August, thousands of Syrians gathered in Azaz after Friday prayers and demanded the retreat of the YPG "from the lands of Arabs," condemning their assaults on Azaz and Mare. A similar one was held last month in the district of Mare in Aleppo after the YPG opened fire on workers in fields, killing a young girl and injuring two civilians. The people of Mare chanted slogans against the PYD and held banners saying: "Turkish soldiers are our brothers and allies."