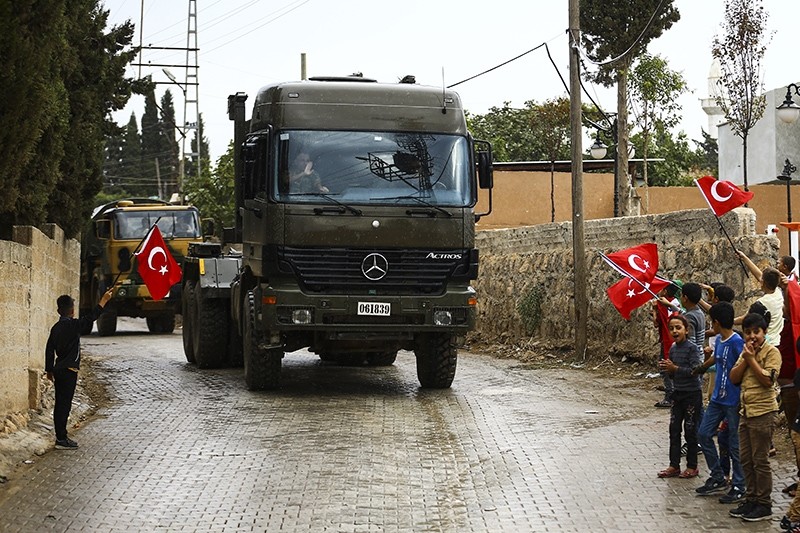 Canikli, responding to questions about the operation on a visit to Georgia for the South-East European Defense Ministers' Meeting, said:

"We jointly operate with the Free Syria Army (FSA) consisting of Syrians. They defend their own lands while we support them."

Turkish military units have started expeditionary activities in Idlib, Syria, in line with the de-escalation zone deal that emerged from talks in Astana, Kazakhstan, the military said Monday.

The statement, published on the Turkish Armed Forces (TSK)'s website, says the military elements of the monitoring force have started their deployment as of Oct. 8, 2017, to establish monitoring sites during the operation.

When asked about the timeframe of the operation, Canikli said: "Until all threats to Turkey from Syria are completely eliminated, we must remain there."

Prime Minister Binali Yıldırım also touched on the issue at the Justice and Development Party's (AK Party) weekly parliamentary group meeting, saying Turkey, along with Russia and Iran, took significant initiative in Astana to "put the latest developments in Syria on the right course."

He said that Turkey had launched Operation Euphrates Shield to ensure border security by eradicating the terrorist threat and a secure area had been created by eliminating Daesh elements in the area.

"As part of the reached agreement, Idlib will be taken in a security circle by the three guarantor states, and terrorist activities will be prevented. This is the second cross-border operation after Operation Euphrates Shield in Syria. Our aim is clear – tackling mass migration and hindering conflicts by reducing tensions," he said.

Yıldırım also said Turkey aims to create control points in Idlib for future deployments and that the TSK activities in Idlib would help prevent internal conflicts between civilians and militant groups in the region.

President Recep Tayyip Erdoğan said Monday that the FSA launched an operation in Idlib in the scope of a de-escalation agreement reached in the latest Astana talks amid attempts to prevent the formation of "terror cantons" being established along its border with Syria by the PKK's Syrian affiliate Democratic Union Party (PYD) and its armed People's Protection Units (YPG).

The developments in Syria and Iraq are "directly related to Turkey's national security," Erdoğan said, adding that Ankara is resolute "to solve the problem at its source."

Meanwhile, the YPG opened fire on Monday night from the northern Syrian area of Tal Abyad toward the Turkish border, and military forces immediately retaliated with an amendment to the rules of the engagement.

The TSK statement says the goals of the de-escalation zones, which were declared Dec. 30, 2016, and guaranteed by Turkey, Russia and Iran, aim to increase the effectiveness of the cease-fire agreement, ending armed clashes, providing humanitarian aid, establishing proper conditions for displaced people to return and supporting the establishment of conditions for a peaceful resolution of the conflict.

It says that TSK elements will be carrying out their duties through the rules of engagement agreed to by the guarantor countries.

The operation is the second Turkish incursion into Syria. The first operation, Euphrates Shield, was launched on Aug. 24, 2016. It backed FSA forces to clear Daesh from Turkey's border and establish a buffer zone for security and prevent further influxes of refugees into the country.

The operation recaptured several towns, including Jarablous, al-Rai, Dabiq and al-Bab and securing the town of Azaz, a main refugee center in northern Syria across the border from Turkey. The operation also prevented the PYD from taking control of the area in its bid to connect its Afrin canton with the territories it controls in Manbij, Kobani and further east in Hasakah and Qamishli.

In the operation, Daesh strongholds were defeated and more than 2,000 square kilometers in northern Syria were seized from the terrorist group. More than 100,000 Syrian refugees were relocated back to their hometowns in the liberated areas.